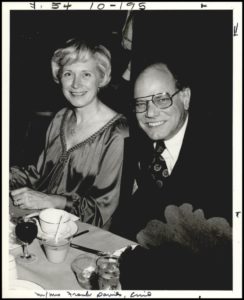 This is from Frank Davies’ obituary:

Frank Lubbock Davies, Jr. Frank was born in Tulsa, Oklahoma on February 23, 1927 to Jane Martin and Frank Lubbock Davies. He grew up in Tulsa and Wichita, before moving to Enid in 1940. He graduated from Enid High School in 1945, where he was Class President, Captain of the football team, and Student body president with Bill Stramp. Frank joined the Navy after high school, serving as a radar operator during WWII. He participated in east coast mine sweeping on the USS Hamilton, USS Hobson, and USS Fitch. He attended the University of Oklahoma, graduating with a Bachelors in Architecture in 1952. While attending college, he married Nancy Jane Frantz (pictured with Frank above), also from Enid. A member of the Phi Delta Theta Fraternity, Frank studied architecture under the Dean of the school Bruce Goff. Frank apprenticed at Coston Frankfort Short and Caudill Rowlett Scott in Oklahoma City until founding Howard Samis & Davies in 1958. Frank moved back to Enid in 1965 to manage Davies Brick & Tile while his father underwent cancer treatment in Oklahoma City. After the brick plant was sold, Frank was offered a partnership with D. A. Smith, which became Smith Day & Davies, securing his lifetime commitment to Enid. Soon after D. A. Smith passed, Bob Poe joined the firm, and opened the Tulsa office Day Davies & Poe in 1974, which eventually became Davies and Poe. In conjunction with two other consulting firms, Frank became vice-president of Jack Nicholas Associates, designing golf course communities throughout the United States. Frank was on the Board of Visitors for the OU School of Architecture, and the OU Business School. He was a lifelong member of the American Institute of Architects and served on the Oklahoma Board of Governors of Licensed Architects. Frank was an active member of the Oklahoma Chamber of Commerce, the Enid Chamber of Commerce, and the Enid Rotary Club, eventually serving as president of all three organizations. He also served as co-chair of the United Way in Enid.