A Look at the Enchanting Hull House

It’s always an exciting day when I’m wandering around the Oklahoman archives and stumble upon a piece of history I knew nothing about.  Well, that’s exactly what happened when I found an article about a home Conner & Pojezny designed near the old Springlake Amusement Park.  The low-slung house is basically a window of walls overlooking a few acres of undeveloped wooded land that was once home to a Boy Scout camp: 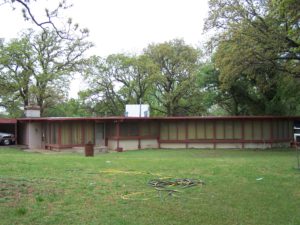 Built in 1947, the house is one of the oldest examples of mod residential architecture in the city and has had just three owners in its long history.  Although it looks like it’s in need of a little love in these photos I took about 10 years ago, it still has great bones.  If I had this baby in my possession, the first thing I’d do is remove all of those curtains and open up the place to the outdoors — those windows are just begging to let the outside in.

Anyway, here’s the article by Tom Beane about the first owners that only adds to the charm of the place:

A rumor has been going around for some time now that there is, right here in Oklahoma City, an enchanted house.  For reasons that I shall come to, the rumor has not gotten much circulation.  This is unfortunate in a way because it is not often that one comes upon an enchanted house.

Haunted houses, as you’ve probably noticed, are getting to be so numerous that there no longer are enough haunts to fill them up.  But enchanted houses are something else.

I am happy to report that a thorough investigation has been performed and the rumor is absolutely true.  There is one person who does not agree.  Bob Person.  He owns the house.  But what does he know, anyway?

The house is in northeast Oklahoma City amid four and a half acres of trees, grass, shrubs, and flowers.  The land dips and swells and dips again into a shallow ravine that funnels water, and sometimes fish, into a pond at the north end.  There’s a decapitated windmill, too being taken over by a wisteria vine and a small, unused concrete swimming pool that harks back to the days 50 or 60 years ago when the land was a Boy Scout camp.

The house hugs the ground on a low hill, the spot where two young architects sat and designed a home containing 1,600 square feet, only two major rooms, walls that are 80 percent windows, 103 feet of built-in bookshelves, two built-in desks, and Mr. and Mrs. Jack Hull.  The Hulls built the place.  That was in 1949 and though they did not know at the time that they had an enchanted house, they did know it was unusual.  So did a lot of other people, who, ignoring privacy and poison ivy, came tramping around for a better look.

“Sunday afternoons were the worst,” Jack recalled last week.  (When I called him Mr. Hull, he grinned and shook his head and said, “No, no … it’s Jack.”  So be it.)  “We would be back in the bedroom taking a snooze, and we’d heard voices.  We’d come in here and they’d be inside in the living room looking around.”  It is no wonder, then, that the Hulls did not want any rumors flying about that might bring the hordes of gawking strangers down upon them again.  They kept quiet, for awhile at least.

Then, just a few weeks ago, they sold their house to Bob and Susan Person, a young couple with two cats and a penchant for staring raptly out windows at trees and at the moles and gophers transplanting the iris bulbs.  The Hulls have been spending their summers in Colorado for the last couple of years since Jack retired as administrative assistant with the Oklahoma City Chamber of Commerce.  Consequently, he said, he didn’t have the time or, because he’s 74 now, the energy to keep the property in top shape.

It took the Hulls 20 minutes or so to satisfy themselves that the Persons would give their home a good home, and they sold it and moved into an apartment.  The two couples have since become fast friends.  “We just fell in love with them,” Mrs. Hull said of the Persons.  “It helped ease the sting of giving up our home.”

It was Mrs. Hull, iridescent and zestful like her husband — it’s as though most of the time she’s about to spill over with good news — who put the clincher on that rumor.  On several occasions, Mrs. Hull said, couples have become engaged while visiting in the house on an evening.  Friends who marriages were on the rocks have become reconciled and their marriages saved after they spent a few hours in the house.  A suicide was prevented there.  The details of those incidents she keeps to herself.

“People throw off their artificiality when they come into a place like this,” she said.  “They can just sit and look out the windows and pretty soon they want to talk.”  The minister of her church would come out every so often to walk around the grounds whenever he had a sticky problem or needed inspiration for a sermon.  The house didn’t let him down.”

Once, after an operation, Mrs. Hull was confined to a wheelchair for a year.  She spent the time decorating the house with 650 pounds of ceramic tile.  “It’s the only thing that kept me from going crazy,” she said.  “You see,” said Jack,  “one case of insanity also was prevented in this house.”

Bob Person, who said he was overwhelmed by the house and its surroundings, is firmly skeptical about its so-called powers.  “It’s not the house,” he said.  “It’s the Hulls.”  He should know better than to argue against the evidence.  Next thing you know, he’ll be trying to spike another rumor I have picked up in the last few days.  This one is similar to the first, but not as intriguing — or as believable.  It does not concern an enchanted house.  Just an apartment.  I’ll have to look into it.

Here’s the home in 1971 when it was featured in the Oklahoman: 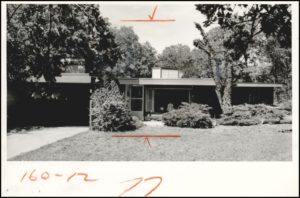 As a Chamber of Commerce employee working in the aviation research division, Jack Hull was a central figure in getting Tinker AFB and the FAA Aeronautical Center to locate in the OKC area.  Go here to read an article about his years at the Chamber.  And here’s a photo of Jack and his wife, who I believe was Elizabeth, from the early 1950s: 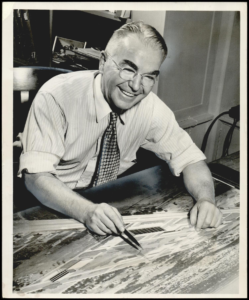 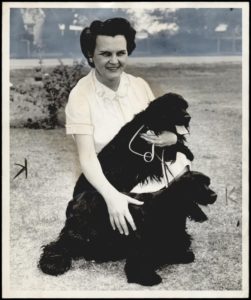 As for the Persons, they lived in this magical abode until 1989, when the current owner purchased it.  So, it must truly be enchanted for this home to have had just three owners in its long history.  Here’s Bob Person (on the right) from 1971, when he was president of the Sierra Club: 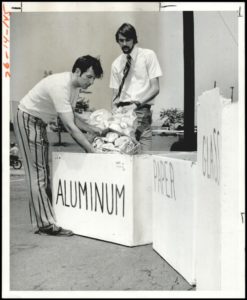 Finally, here are a few more photos of the home from 2008.  It looks a bit tired but is still as enchanting as ever. 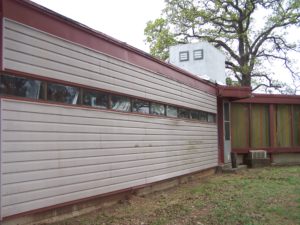 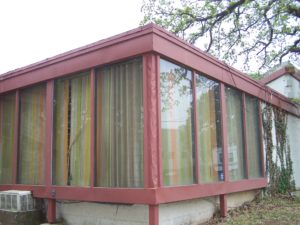 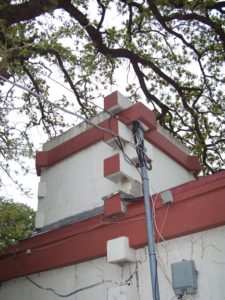 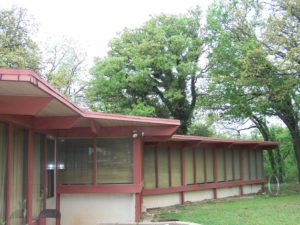