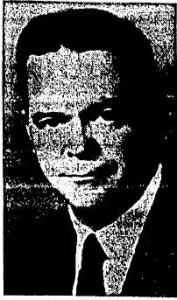 Raymond Carter was born in Mayetta, KS, in 1912 and attended Classen High School in OKC.  While still in high school, he won both the Edison Award and a city-wide student architecture competition, which included a $75 cash prize.  Not bad for a kid in 1929! After high school, Raymond headed off to college, first on an architectural scholarship at Washington University then at OSU.  He also took classes at OCU, where he recognition in several architectural competitions, including a General Electric competition for residential design.  He established his own firm in 1940 and began designing homes in the Metro and also completed preliminary drawings for the business district in the newly created ‘burb of Midwest City.

Just when he was making a name for himself, Raymond put his burgeoning career on hold and he joined the Army Corps of Engineers/Army Air Corps after Pearl Harbor.  He obtained the rank of Captain while serving in the Pacific Theatre and was among the first United States forces to enter Japan as part of General MacArthur’s interrogation team.  He was awarded the Victory Medal, Air Medal with three bronze stars, and the Philippines Liberation with one bronze star.

By 1947, he was back at work in OKC desiging homes for other returning G.I.’s and their “baby boomer” families who wanted to live the good life in affluent Nichols Hills.  His charming designs became so popular, in fact, that Raymond quickly became the go-to guy for residential design in OKC.  He was also very versatile and could design a traditional home (complete with white picket fence) as easily as he could create a MCM masterpiece (often featuring his trademark trellis work).  Ultimately, he designed well over 300 homes throughout Oklahoma and in Texas, Arkansas, Kansas, and Colorado.

Raymond also branched outside design when he started Carter Products in 1951.  The company provided custom wood products for homes all over the state.  Always looking for opportunity, Raymond also partnered with interior designer Warren Ramsey to form Carter-Ramsey, Inc., in 1955, to develop the acreage surrounding the Buttram mansion in Nichols Hills as Buttram Estates.  For 10 years, the duo worked together on many projects, providing customers with A-Z, full service plans that would result in a completely furnished, move-in ready home once a project was completed.  If you’ve ever been in a Carter/Ramsey home, you’ll agree that the spaces they created together are pure magic.

To say that Raymond Carter was prolific is an understatement because it’s difficult to drive through an upscale NW OKC or Edmond neighborhood without encountering one of his glorious creations — all of this and he was never even a licensed architect!  Even 25 years after his death in 1992, Metro real estate agents recognize the cache his name still brings and are sure to mention their listings as “Raymond Carter” designs in their sales marketing materials.