After the war, developers of suburban neighborhoods began gobbling up farmland far from the city center and churning it into sapling-lined streets packed with picturesque homes for veterans eager to spend their hard-earned GI Bill money.  As more people moved away from the hubbub of the inner city, shopping centers, restaurants, and other conveniences were constructed in the ‘burbs, including movie theaters.

I recently found a 1947 article in Boxoffice magazine devoted to movie theater architect, Jack Corgan.  Corgan was born in Hugo and graduated from OSU in 1935.  Over the next two decades, he designed a whopping 350 movie theaters and 70 drive-ins, in addition to many other structures.

In the Boxoffice article, Corgan discusses three movie houses he had just completed in the metro area: May Theatre, Agnew Theatre, and the Boomer in Norman.  (The fourth mentioned in the article is the Plains Theater in Roswell, NM). 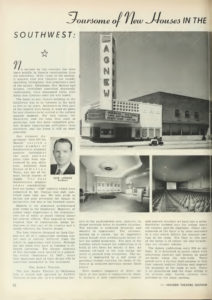 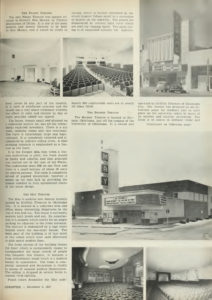 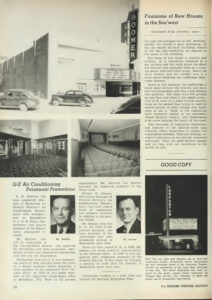 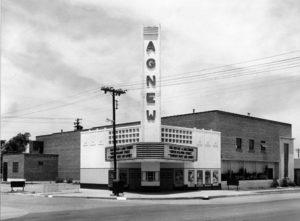 With its distinctive, towering pylon sign, the Agnew was originally owned by the local Griffith theater chain.  It opened on March 28, 1947 with “Blue Skies” starring Bing Crosby and Fred Astaire as its first feature.  The 950-seat theater was “decorated in pastel colors with abstract leaf designs on panel set-backs along the side-walls.  These panels serve a further dual-purpose in that they conceal indirect lighting and improve the acoustics of the room….” 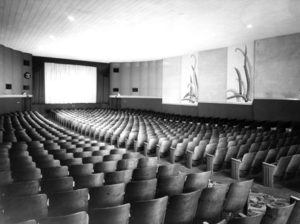 Here’s a photo of the Agnew’s snack bar and an image of the building at night: 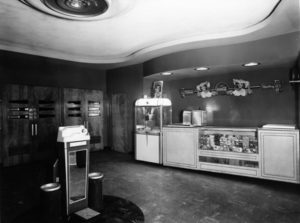 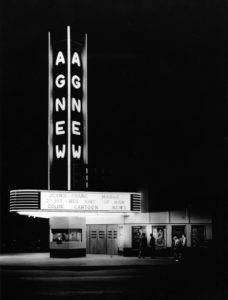 The Agnew stayed in business for a short 10 years before closing its doors as a movie theater forever in 1958.  Later on, the building became home to the Hog House Restaurant and a Harley Davidson for several years, but it was closed by the time I took this photo in 2009: 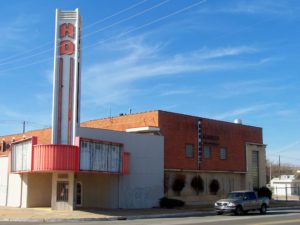 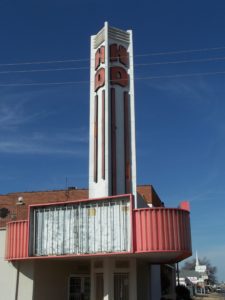 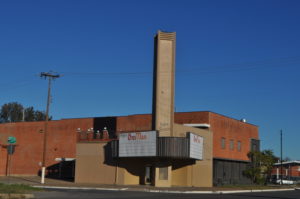 Today, it is an events center called the Fandango, as you can see in this Googlemaps image:

Here’s a cool rendering of the May Theatre: 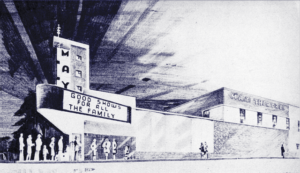 Also owned by the Griffith chain, the 950-seat theater opened in 1946 with the feature, “Two Guys From Milwaukee” starring Dennis Morgan.

The L-shaped theater boasted a large lobby and concession stand that opened to the grand theater, which featured tropical foilage murals and a dropped acoustical tile ceiling.

Here’s the theater soon after it opened: 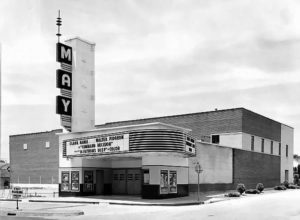 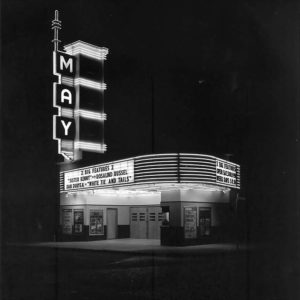 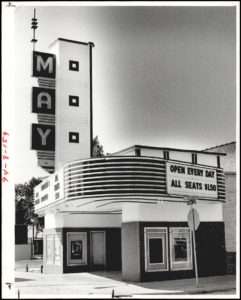 Unlike the Agnew, which folded after just a few years, the May remained as a theater until 1989.  Since then, it has been an antique mall… 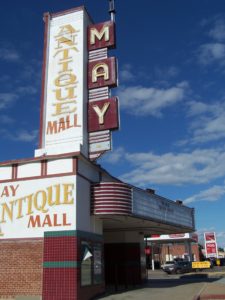 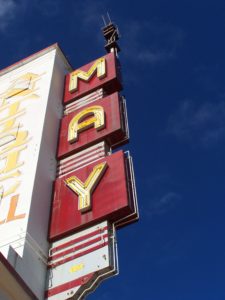 … and a Hispanic church… 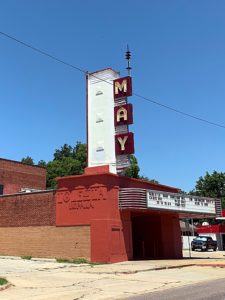 The old theater recently received an exterior paint job, so it’s looking pretty good these days, at least on the outside.  The last time I was in the theater was when it was the antique mall and at that time, all of the original murals were extant and the coved ceiling in the lobby and snack bar was intact.  Hopefully, it’s all still there.

Here’s Corgan’s rendering of the Boomer: 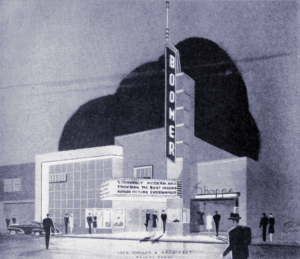 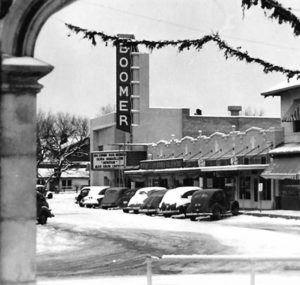 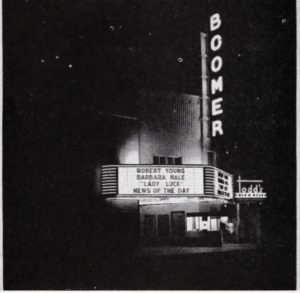 In addition to the main auditorium, there was additional seating in an adjoining room for private parties or crying babies.  And to pay homage to the college town it served, an artist painted a mural over the theater doors depicting “the traditional Oklahoma Sooners.”

The movie house closed its doors for good in the mid-’70s, and the place became a concert venue where the likes of the Talking Heads, The Specials, XTC, The Police, Buzzcocks, and The Cramps played.  After that, the building was home to New Life Ministries for a couple of years before being transformed into the headquarters for local retailer, Harold’s.  When Harold’s filed for bankruptcy in 2008, the building was modified again and is now home to a Chipotle Mexican Grill. 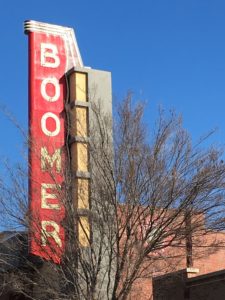 Jack Corgan designed many other theaters in Oklahoma, so you can count on future Mod Blogs featuring his work.