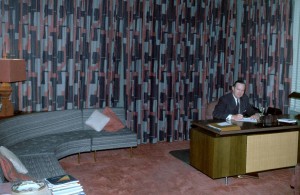 Jack Corgan was born in Hugo and graduated from OSU.  After graduating in 1935, he moved to Dallas and set up practice in 1938 designing movie theaters in Oklahoma and throughout the Southwest (he would ultimately design 350 of them and over 70 drive-in theaters!).  Because he had to travel great distances to job sites, Jack got his pilot’s license so that he could quickly fly to remote locations with ease.  This experience served him well when the U.S. declared war on Japan and Germany after Pearl Harbor and Jack closed up his firm to spend the war years as a flight instructor in the Army Air Corps (now Air Force).   After the war, he reopened for business and quickly became one of the premiere firms in the Lone Star State, designing such modern icons as Love Field terminal and the soon-to-be restored Braniff Building at Love Field.  Corgan continued practicing until shortly before his death in 2000.  His firm continues to thrive today and is consistently ranked as one of the top 10 firms in the U.S.  Corgan’s family also are big supporters of the School of Architecture at OSU.