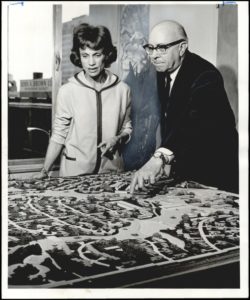 Sorey Hill Sorey was founded in 1931 by University of Oklahoma graduate Tom Sorey, Sr. (pictured above).  The firm initially included his brother-in-law, Alfred Hill and cousin, Lee Sorey.  Adhering to clients’ needs and conservative trends of the time, the young team was adept at traditional design in the firm’s early years.  After WWII, a second generation of family members rounded out the firm when recent OSU graduates, Tom Sorey, Jr., his cousin, Neil Hill, and his brother and OU graduate, Stewart Sorey, came aboard (Stewart later left the firm and moved to Denver).  The new blood brought a more intense zeal for Modernism to the firm, leading to some of the most impressive mid-century designs to be seen anywhere in the state.

The Founders District: A History of Mid-Century Modern Architecture
The Rise and Inglorious Fall of the Downtown YMCA
Penn Square: Oklahoma’s First Modern Shopping Mall
From Civil Rights to The Who: A Look at Wedgewood Village Amusement Park
The Sorey House in Architectural Record Magazine