Through the Viewfinder: A Vintage Look at Ray James’ Gwin House

Nestled among the rolling hills surrounding the aptly named Oak Hills Golf and Country Club in Ada is a mid-century sub-division filled with low-slung ranch houses that seem to meander for entire city blocks and split-level wonders built precariously into steep slopes.  Amid these residential delights is one buff brick home with such subtle architectural features that many a non-observant passerby might overlook it in favor of the neighborhood’s more obviously dramatic abodes.  But, what they don’t know — and what the exterior of the Gwin House only vaguely hints at — is a glorious secret the home quietly keeps to itself and shares only with those who have been inside its remarkable rooms — and that’s just what architect Ray James intended.

R.E. Gwin was the second-generation owner of Gwin’s Drug Store in downtown Ada and commissioned James to design his new family home after the architect redesigned a storefront on another downtown building the Gwins owned.  According to James, who died in 2014, “I designed a front made up of a series of triangles that could be attached to wooden screens but no contractor would take on the job, so I got a laborer to assist me and the two of us did the job. It created a lot of attention but a national chain rented the building and they took down what I had put up and put their own front in its place.”  Even with the turn of events, the Gwins were so pleased with James’ economical but creative storefront design that they provided him with a budget of $75,000 for their new home and allowed his creative mind to run wild.  What he came up with must be one of the most understated but stunning pieces of residential architecture in the state. 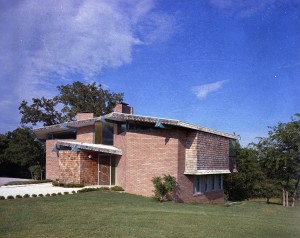 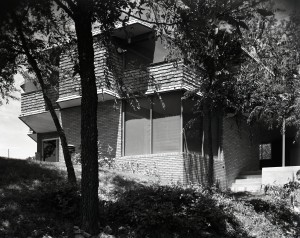 Visitors entered the home on the second level that contained the formal living, dining, and kitchen areas: 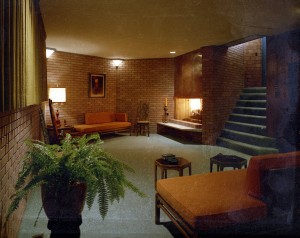 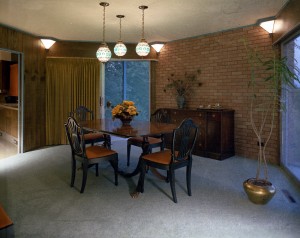 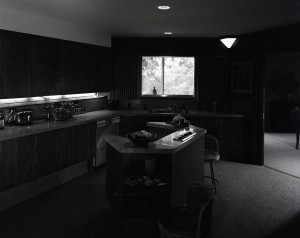 The upper level housed a dramatic landing and three bedrooms…: 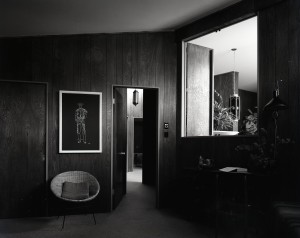 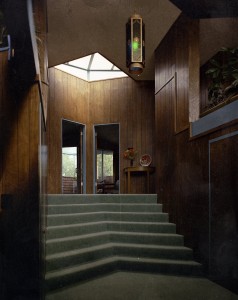 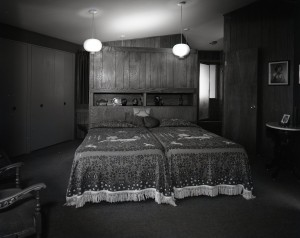 … while the lowest level contained an expansive den and a much-needed accessory in the mercurial Oklahoma climes: a concrete storm shelter. 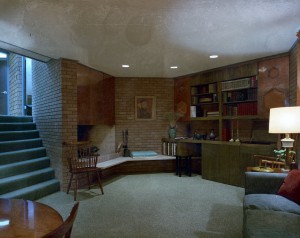 Like many of his designs, James played with texture and pattern for the Gwin House by incorporating similarly-colored brick and shingles in the design and offsetting them with angled, clerestory windows to enhance privacy and to protect the home’s great secret: its striking and beautifully modern interior spaces.  Once inside, the entire house opened up to huge windows and doors running along the back that admitted an abundance of natural light and encouraged casual, indoor/outdoor living.  In addition, the interesting angles continued indoors with nary a square room in James’ plan.

The Gwins were thrilled with James’ design and even upped the budget $10,000 when the architect suggested incorporating multiple built-ins throughout the house.  With plans approved, building began in early 1963 and the Gwins moved in even before construction was completed a few months later.  During this time, James recalled that, “One day, Mrs. Gwin called mad as a wet hen because she had exited the front door to join a friend, who had come by to take her to some social function or other.  We had placed a series of wooden 2X12’s to walk on between the front door and the drive where the friend was waiting in a car for her. She slipped and fell in the mud and she was sure that it was all my fault and let me know about it.” 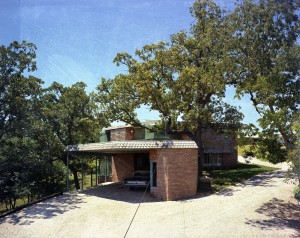 Even with that messy-but-slight snafu, the Gwins loved the home and lived there for many years until finally selling it to the current owners.  And, after more than five decades, the house built into the hillside still looks fresh, current, and classy, as you can kind of tell from this 2013 gray-day photo: 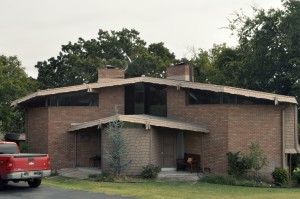