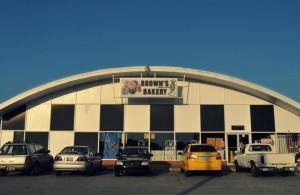 I always thought that the popular OKC institution known as Brown’s Bakery was housed in an old Safeway but then found out that the building was constructed a full decade before that chain’s “marina” style came into being.

It was built for Clyde’s Supermarket and a true, post-war supermarket it must have been! In a day when most markets were teeny tiny corner stores that carried only a small selection of goods, this stand-alone, ultra-modern precursor to today’s superstores must have been quite a revolutionary concept and a dream come true to people who had to ration every grocery item just a couple of years before.

Clyde’s was such a marvel that it was featured in several publications soon after it was built, garnering architect Joseph N. Boaz national attention. Boaz graduated from OU then went on to Columbia to earn a Master’s in Architecture. While there, WWII broke out and Boaz found himself working with the National Bureau of Yards and Docks in NYC for the duration. After VJ Day, he stayed there and worked at a firm in the Big Apple for a bit before deciding that it was time to return home to Oklahoma and establish a career here in 1945. I believe that Clyde’s was one of his first jobs after returning to OKC, and it was only one of many of his buildings that would receive national attention.  For awhile in the early ’50s, he was an assistant professor of architecture at Yale and a visiting critic for architecture at Cornell before moving to North Carolina in 1956.  There, he practiced and worked as an associate professor of architecture at North Carolina State University under our old pal Henry Kamphoefner.  Here’s Boaz during his years at NCSU: 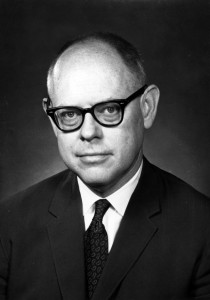 And with Kamphoefner and crew in 1966: 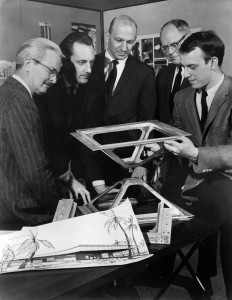 Clyde’s was featured in the May 1949 issue of Progressive Architecture, which includes some pretty great drawings and photos.  Here’s the article:

In our increasingly urban mode of existence, the complex problems of food supply and ready access to assume major importance.  With the difficulties of coping with traffic and the time consumed in traveling from shop to shop, a clear trend has been the development of the centralized food department store or supermarket where the housewife the answer to most of food-buying needs.

Program: A rental unit (supermarket tenant known ahead of time) and the first new building on the property that the owner plans to develop further.

Site: Wedge-shape sloping site at intersection of two streets, converging on busy traffic hub.  Change in grade of about eight feet between intersection (low point) and northeast corner of site; sewer easement runs east-west across property about midway between north and south boundaries.  Traffic at intersection indicated that entrances occur along West Park Place or well back on West 10th Street: 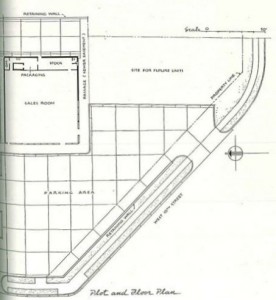 Solution: Supermarket as far in northeast corner as possible, allowing for service drive at rear; building width limited by occurrence of sewer easement; car parking in front (because of up slope, parked cars do not hide the building).  A simple rectangular plan with east end partitioned to set off service areas.  North wall and rear portion of south wall windowless to provide wall-case space: 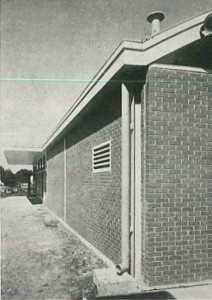 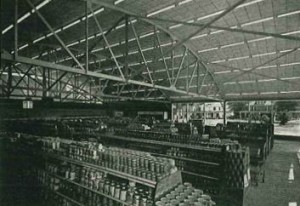 West end, most of south side, and truss area of east wall glazed.  Steel columns and bowstring trusses ingeniously integrated with a cavity-brick curtain-wall construction: 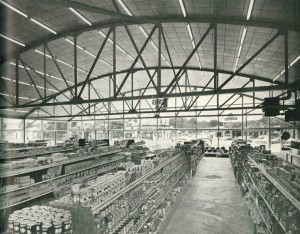 An uninterrupted floor area was achieved by means of steel bowstring trusses spanning the width; supported on steel columns.  Curtain, cavity-brick panels between columns are of modular design using only whole bricks except for bats that close alternate course ends.  Details of corner and column areas: 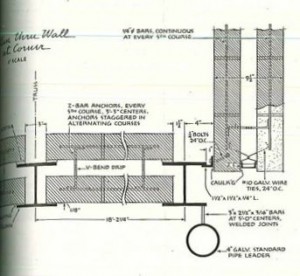 From the last photo, it looks like there were shades for the west-facing windows to block out the harsh afternoon sun.  At some point, the shades were replaced with the wood panels that are there today: 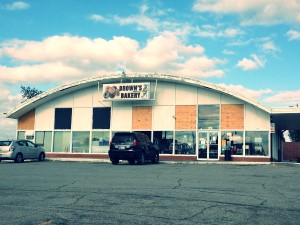 Even with the wood panels, the nearly 70-year-old Clyde’s building still looks zippy and modern, don’t you think?

Through the Viewfinder: A Vintage Look at Ray James’ Gwin House Welcome to the World, Bavinger House
Click here to go back to previous page