by Lynne Rostochil.  Photos from the OPUBCO collection at The History Center.

Oklahoma City was home to quite a few drive-in movie theaters during their mid-century heyday but none was more fantastically modern than the incredible North Penn Twin at NW 122nd and Pennsylvania.  In 1961, the Bartons, who owned over a dozen indoor and drive-in theaters throughout the Metro, bought a 188-acre parcel of land on the southeast corner of NW 122nd and Penn to create an addition to their thriving chain.  With so many families moving to the far northern reaches of town into the fledgling Quail Creek, Camelot, and Penn Park additions, the Bartons felt this would be the perfect location for their latest enterprise.

So construction began and when the gorgeously Googie theater opened in May 1963, ads touted the drive-in as “the world’s largest million dollar theater.”  They also boasted about the theater’s “unique tunnel entrance, unique picnic park, UNIQUE modern design, most modern equipment, and choice of theaters and programs.”  Yes, the word “unique” might be overused in this ad, but it surely describes the truly stunning architecture of the North Penn Twin.  Have a look at this big wow of a building and you’ll see what I mean:

Oh my, how great is that?!  Does it remind you a bit of the Founders Bank building designed by Bob Bowlby?  During my many conversations with Bob, he mentioned that he worked on a drive-in theater for the Bartons, but he couldn’t remember when or which theater it was.  I’ve also heard from others over the years that he designed a drive-in theater here but he has never said which one.  So, as soon as I found these photos the other day, I emailed Bob to ask if the North Penn Twin was his design.  This was his reply: “I might have done some drafting on the … structure that Calvin Garrett would have designed.”  Even though he doesn’t claim the theater as his design, I think he’s being shy and this may very well be his work.  However, it also seems possible that Garrett was the brain behind the modern architecture at the North Penn Twin because he also designed the much beloved and very modern Continental Theater a couple years later near the Founders Tower:

When the North Penn opened for business, customers flocked to the new theater to see Pat Boone deviate from his perennial nice guy image in very vanilla musicals to portray a cad in the thriller,”The Yellow Canary.”  I’ve never even heard of this movie but just read the synopsis for it, and I have to say that it looks pretty good. 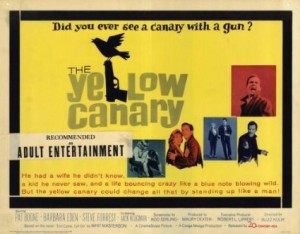 It’s now on my “must see” movie list, especially considering that the screenplay was written by the always stylish and ever creative Rod Serling, who I crushed on big time as a kid during his “Night Gallery” years.  At that magical TV hour, I’d drop whatever I was doing and glue myself to the screen to get creeped out by the art and to hear Rod Serling’s soothing, dark voice expertly string words together in a way I had never heard before.  Oh how I love that guy and his writing! 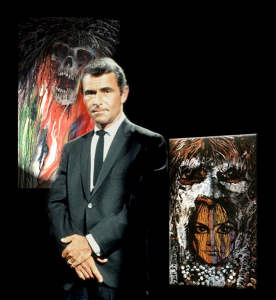 Well, I know you don’t care about my undying love for Rod Serling, but I don’t think even he could have imagined a story stranger than the one associated with the North Penn Twin theater.

Within a few weeks of opening, customers began complaining about the horrible odor enveloping the drive-in.  It was so bad that some customers demanded refunds and others would call ahead to see if the place was stinky before making the trek to catch a movie.  If it was smelly, the place was often quiet as a ghost town in one of Serling’s spooky scenarios.  What was the culprit?  Well, just south of the theater was the sewage plant for the Village.  Yes, on many days when the breeze was right, raw sewage from the 22,500 Village residents wafted through the air to the neighboring outdoor theater.  Here’s a 1969 aerial photo from OKCTalk showing the theater and the sewage plant directly to the south of it: 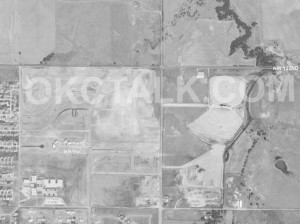 No wonder the theater was empty quite a bit of the time, even though the theater’s managers tried everything to make the smell go away, including using fans and spraying more pleasant fragrances around the perimeter of the theater on busy show days.  Obviously, that didn’t work very well.  So the Bartons took the Village to court asking for $200,000 in damages, claiming that the plant was built to handle the waste of just 7,500 people, not nearly triple the number that lived within city limits in 1964.  The case lingered in the courts for years, with one siding with the Village and a subsequent ruling in favor of the Bartons.  However, the second court didn’t assess damages since the theater had been open only a short time when the case was initially filed and they couldn’t determine if the theater would have been a successful venture or not.  I’m not sure what the final ruling was, but the North Penn Twin remained operating even as the case progressed through the courts.

Yeah, I don’t think Rod Serling would have thought of that crazy little plot twist — a sewage plant vs. a drive-in theater.

When it wasn’t smelly, gaggles of teens still spent warm summer evenings hanging out at the hip drive-in and hopefully flirting with potential mates, chomping on buckets full of popcorn, guzzling plenty of Coke (or sneaking in harder stuff), and maybe even catching a frame or two of the movie.  In the summer of 1965, Dave Clark Five’s “Having a Wild Weekend” was a big hit — it’s by far my favorite of the mid-’60s pop band movies, way better than anything from The Beatles, I think: 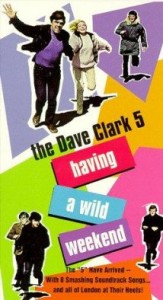 The following summer, the Bartons leased out 18 of their theaters, including the nearby Northwest Hi-Way Drive-In, the Cinema 66, the Sooner Twin, and of course, the North Penn Twin (but not their crown jewel, the Continental — that beauty remained in the family).  Even though it was only a few years old, the new leaseholders, the Greater Oklahoma City Amusement Corp., decided to give the North Penn Twin a facelift.  I couldn’t find any photos of the remodeled theater and have no idea of how much of the original Googie design remained after 1966, but I do know that the drive-in stayed in business until the end of the 1974 season.  The leaseholder filed for bankruptcy that summer and closed several of the drive-ins, including the ill-fated venue near the sewage plant.  In operation for a mere 11 troubled years, the North Penn Twin was history: 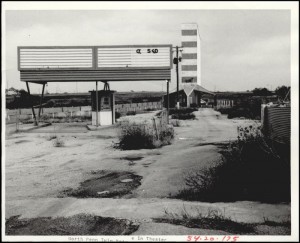 The site of the old drive-in remained vacant for the rest of the ’70s — perhaps because everyone knew about the stink by that time and wanted to stay as far away from the sewage plant as possible.  I’m thinking that the plant might have been relocated in the early ’80s, however, because a large apartment complex called Heritage Park was constructed on the old theater grounds in 1982 and I didn’t find any record of complaints from tenants or owners.  So, it looks like the infamous foul odor has drifted off into the winds of history just like its neighboring nemesis, the modern but doomed North Penn Twin.

By the way, if you haven’t checked out OKCTalk, I highly recommend joining their forum page.  You can access all kinds of aerial maps of OKC from 1969, chat about Oklahoma City history, or learn all about building projects going on around town.  It’s a great site.

On the Market: OKC’s Own “Living Conditioned” Home Through the Viewfinder: A Vintage Look at Ray James’ Gwin House
Click here to go back to previous page