On the Market: OKC’s Own “Living Conditioned” Home 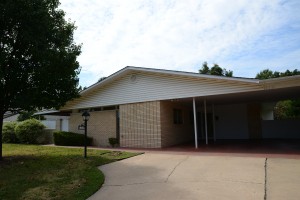 You may have seen photos of this house at 6117 Smith Blvd. over the last few months and the discussions we’ve had about it on the Okie Mod Squad Facebook page.  I had, too, and thought this house was great, but I had no idea just how wonderful it is until I toured it and then researched its history and found that this place has quite a surprising pedigree.

In 1955, Living For Young Homemakers magazine sponsored the “Living Conditioned” homes program, which was sponsored by Hotpoint as part of their Golden Anniversary celebration.  The magazine selected four architects from all over the nation to design modern homes with a “magnificently simple design for gracious living” while also incorporating all-electric appliances (Hotpoint, of course), as well as the latest in air conditioning.  According to the magazine, “Living Conditioned means a house planned to be lived in….  Living conditioned means a house where the climate is governed by wise heat and good cooling; where the lighting is planned to fit the moods of the occupants; where the traffic pattern is planned and people move around easily without tumbling over each other.”

Each of the “model” homes — which were priced in the $20,000-$25,000 range (that’s about $175,000 – $225,000 today) — were built, and Living For Young Homemakers staff decorated each house for a series of openings to the public.  After that, the models were given to lucky winners of the national Hotpoint contest, and the magazine offered house plans for a mere $10 to the less fortunate non-winners who wanted to experience life the “living conditioned” way.  Here are the four designs that were featured in an ad for the Hotpoint contest in the May 2, 1955 issue of Life magazine: 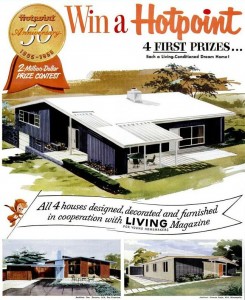 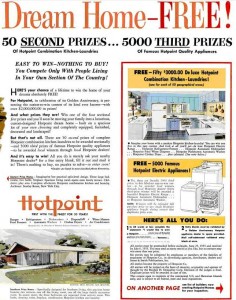 Let’s take a closer look at the home on the bottom of the second page of the ad: 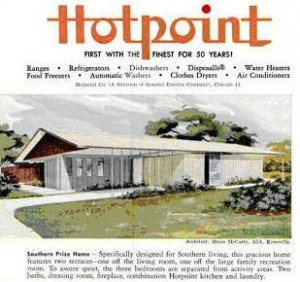 Dubbed the Southern Prize home, this beauty was the brainchild of Knoxville, TN, architect Bruce McCarty and featured a “cantilever design where the single structure supports the entire roof.”  (McCarty would go on to become one of the most prominent architects in Tennessee and help found the University of Tennessee’s College of Architecture in 1965.  Also, he was the master architect for the 1982 World’s Fair.  You can read more about McCarty’s impressive career here and here.)

Oklahoma City builder Joel Coley must have been very impressed with McCarty’s Southern Prize design, quickly shelled out his $10 for the plans, and decided to construct the house in the newly platted Smiths Highland Hills neighborhood just north of NW Expressway and west of Independence.  An expert promoter, Coley titillated prospective Metro buyers all through the spring of 1955 with advertisements filled with effusive language extolling the innovative layout and “all electrical” everything of the home.  All of the ads paid off because by the time the home opened for its first tour the first part of June that year, fascinated gawkers were lined up down the block to see the house that Coley described as “alluring beyond your fondest dreams.”  By the end of the open house period, a whopping 25,000 people had strolled through the Southern Prize home.

There are no vintage photos of this particular home, but Living For Young Homemakers profiled its sister in Knoxville, which is now on the National Register: 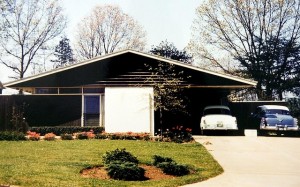 I’ll show an interior shot of the Knoxville house in a bit.  In the meantime, here’s the floorplan of the three bedroom/two bath house that also appeared in the magazine: 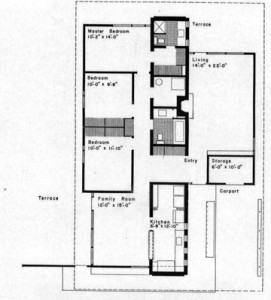 Now let’s take a look at OKC’s version of the home, which is in mostly original condition and is now on the market for a very reasonable $154,900: 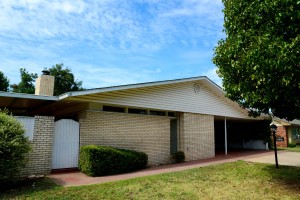 Originally, the siding on the A-frame looked more like the original photo above — in fact, I found a 2003 photo of the home on the tax assessor website that shows the original slatted front: 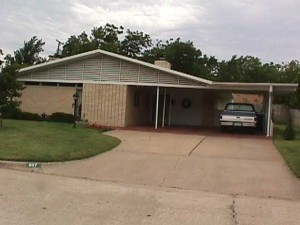 I’ll bet money that the original is behind the siding — maybe the new owner of this beauty will be a bit adventurous and find out.  With or without the siding, the house has great curb appeal, I think.  But inside is even better — there’s 1,860 sf of vintage goodness in there, starting with the entry and an all original front door with the knob in the middle.  How sexy is that?!  The tile floor isn’t too shabby, either: 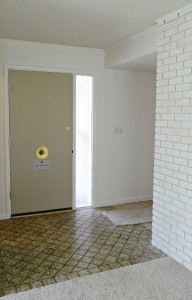 Off of the entry is a huge storage closet, I mean HUGE: 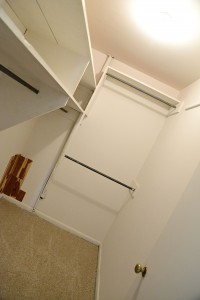 The entry opens to a giant, light-filled living room: 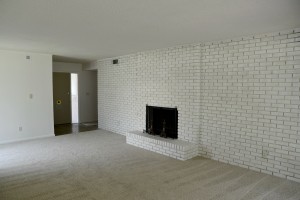 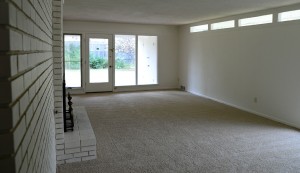 Love, love, love those transom windows!  The Knoxville house has them going all around the room, but it looks like Coley modified the design a bit for this house: 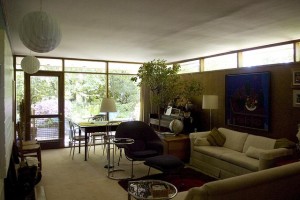 As you can see in the furnished room in the Knoxville house, the living area is a very flexible space and can accommodate quite a bit of furniture and serve a variety of functions.

To the left of the entry is the open plan den/dining area/kitchen, complete with more sassy transom windows.  Love those babies! 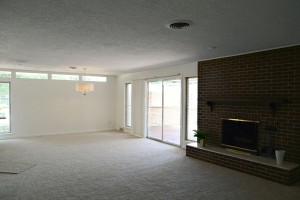 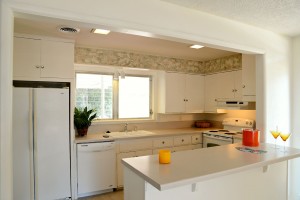 This is only part of the kitchen, really.  To the left are the pantry and washer/dryer hookups: 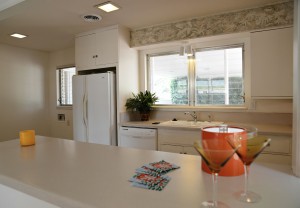 Here’s the view of the room from the kitchen – not too shabby: 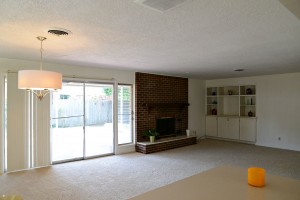 And here’s a closer view of the fireplace and built-ins: 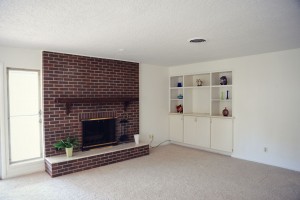 This is where the big mystery of the OKC house lies.  McCarty designed a three bed/two bath house and in articles I found in the Oklahoman, Coley mentions that this house would have the same number of bedrooms.  However, in its current configuration, the home is just two bedrooms.  Normally, I would say that, at some point in its life, the bedroom was removed and replaced with this den but if that’s the case, the transformation occurred long ago and was done so well that there’s no evidence at all today.  So, Coley may have changed his mind and built this as a two bedroom after all or someone did a pretty fantastic job of converting the bedroom into the den.  Whatever happened, the house flows so well now and everything makes perfect sense just the way it is.

Now back to the tour.

Off of the den is a covered and very private patio that would be perfect for place for gatherings or just a romantic dinner for two: 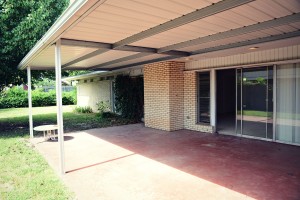 As you can see, the backyard isn’t too shabby, either, and wraps around the house.

Oh, one other thing that I really adore about this house is the use of jalousie windows … or as I’ve always called them, Florida windows: 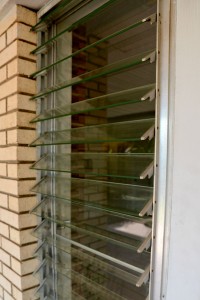 I had never even heard of the word jalousie until my pal and the realtor for the home, Kerry, told me that this is, indeed, the proper term for these louvered windows that were very commonly used in the ’50s in tropical climes to maximize natural ventilation.  Whatever they’re called, they are so cool — literally.

Back inside, there’s a small hallway with storage everywhere you look that leads to the bedroom wing of the house: 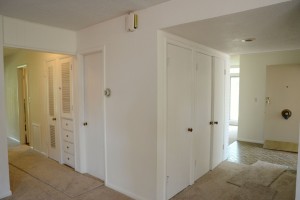 You know how most older homes have little or no storage?  Well, this isn’t one of those places.  There are closets and drawers at nearly every turn, so if you’re a “collector” (i.e., semi-hoarder) like me, you will have plenty of room to put all of your goodies. 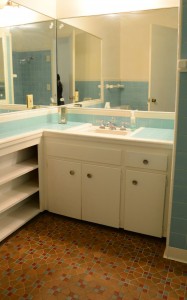 See what I mean about storage in this place?  Love those shelves!  And can you believe that incredible floor?  I have to confess that I did a little happy dance and my voice went up about 12 octaves when I saw it because no bathroom shots were included in the batch of photos I’ve previously seen for the house.  Oh how I love those little Chiclets tiles!  Makes me want to rush out and buy a package of that little gum RIGHT NOW and relive great childhood memories: 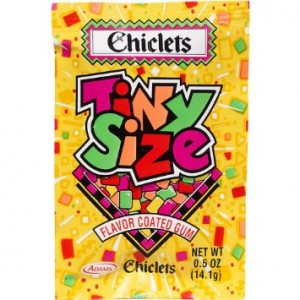 Yum!  Loved that fruity-flavored gum that you’d chew on for about three minutes before it tasted like nothing and then you’d pop another tiny Chiclet in your mouth to bring the flavor back and all of a sudden, you’d have the whole package in your mouth and couldn’t utter a word.  Maybe that’s why my mom never minded me getting those tiny gums when I was a kid — anything to shut me up for awhile!

Across from this fabulous bathroom is the first bedroom with more of those great windows and plenty of storage again: 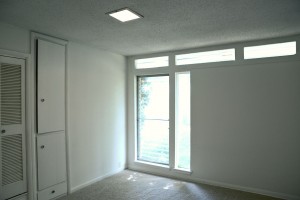 At the end of the hallway is the surprisingly large (especially for the ’50s) master suite that includes more transoms and a walkout to a private patio: 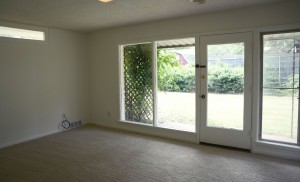 Through two bar room doors (love those!) is the master closet area… 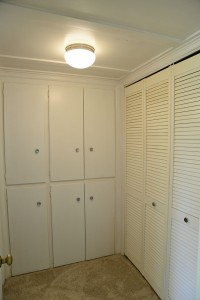 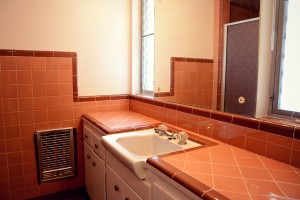 How great is that?!  I love the original taps in the shower, too: 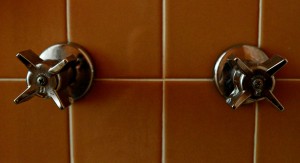 So, how much do you love this house and the fascinating history behind it.  Me?  A lot!  If you think this house might be the one for you, give Kerry a call at 848-4940, and go have a look.  I promise that you’ll be charmed from the minute you walk in the door.

Oh and here’s one last enticement about the house.  Rumor has it that a vampire once lived here.  The owner told Kerry that OKC legend John Ferguson, better known as Count Gregore, called the Southern Prize home at some point — I’m going to do a little research and see it that’s true.  Will let you know. 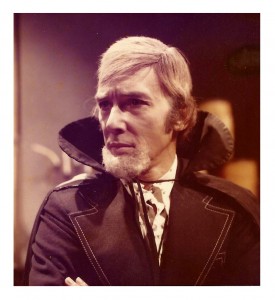 In the meantime, it’s off to score some of those tiny Chiclets and see if they can shut me up like they used to.