FLW Tells OU What Architecture Is

Recently, Tim Brauer posted an article about a 1946 Frank Lloyd Wright visit to OU — perhaps his first visit, from what I can tell.  Tim’s dad, architect Leslie G. Brauer, and Tulsa architect Charles Ward were photographed with Wright for the article, which is likely why this bit of yellowed ephemera has been so well cared for all of these years.  For those of you are somewhat blind like me and have wondered what the article says, I thought I’d earn a huge headache and attempt to transcribe it for all to read.  There are a few words I can’t get — or maybe a lot of them if this article ends up making no sense at all!  If I’ve missed a word, please let me know and I’ll correct the text.

So, see how this sounds: 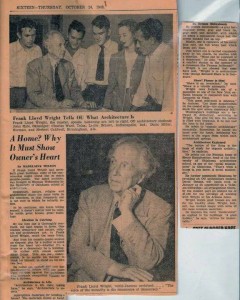 A Home?  Why It Must Show Owner’s Heart

If Frank Lloyd Wright had never built great buildings, some of his conversation might sound like so much mumbo-jumbo.  The noted architect was brought to Norman Wednesday by the University of Oklahoma school of architecture.  Democracy, nature, religion and architecture share the same verbs in his sentences, so that frequently one is not sure to which he actually refers.  As he continues, one keeps telling oneself, it doesn’t matter how he talks, he builds great houses, great buildings.

By the time one is thoroughly confused, the light begins to dawn.  One realizes democracy and nature, religion, and architecture are, to Frank Lloyd Wright, much the same thing.  And from his mumbo-jumbo evolves an eloquent plea for a builder to build from the heart out — whether it’s a house or a democracy he is building.  He strikes with venom against many things.  This, one too understands, is to startle his listener to think for himself, to stand on his own two feet.  He lashes out against XXX pre-fabricated houses with the same vigor he uses against the architect who demands recognition because he has a diploma.

Wright is not pleased that some have said, “Wright is to architecture what George Bernard Shaw is to literature.”

Shaw?  Phooey to Him

“Shaw is an iconoclast,” he says.  “Shaw is a vitriolic antiseptic.”

Wright once forbade the use of a pamphlet at one of his New York exhibits because it compared him with Leonardo da Vinci.

“This great mid-west is America,” he declares.  “Let those monstrosities on the coastal strip — the cinder strip — mark the spot where democracy fell.”

“Washington’s buildings are a betrayal of democracy, according to Wright.  One gets the idea that the nation is filled with betrayals, if he but had the time to list them.  He refers to “organic architecture” repeatedly.  Sometimes he places his hand over his heart, indicating the heart is the organ from which such architecture springs.

“The nature of the thing is the basis of study for organic architecture,” he explains.  He points out the Norman house of Henry Kamphoefner, head of the University of Oklahoma architecture school, as one of the “social missionaries” of Oklahoma.  “That’s what a house is, you know, social missionary.”  He further commends Oklahoma by revealing an OU architecture student, David George, will begin work in January as an apprentice on a Taliesen fellowship — an arrangement whereby the student pays an annual fee of $1,100 for the privilege of working with Wright at his Arizona home.

Wright insists good houses are not for the wealthy alone.  Wright, himself, has worked magic with some of the most common materials.  He despises the word “modernistic” as applied to his buildings.  “A good builder,” he says, “strives for immortality.”

The caption with Wright and the OU students:

The caption of Wright alone:

Frank Lloyd Wright, world-famous architect … “the voice of the minority is the conscience of democracy.”

Wright mentions Henry Kamphoefner.  I’ve been researching him and his very interesting career for awhile and plan to profile his work on a Mod Blog soon.  David George, who is mentioned as receiving a Wright fellowship, worked with the master on projects until Wright’s death in 1959.  George spent his career in Dallas, where he designed a lot of great homes and commercial buildings.  Go here to see some of his homes and here to read his obituary.  As for the other students with Brauer and Ward in the photo, Herbert Caldwell returned to Birmingham to practice, and I haven’t been able to learn more about Doris Miller or John Kyle.

Edgar Tafur and the Art of Mercy The Architecture of Leslie G. Brauer
Click here to go back to previous page