This week, our look at a 1964 spread dedicated to Oklahoma City in ritzy Town & Country magazine continues with a look at the now-demolished and ever-so-stylish Fred Jones house in Nichols Hills.  The magazine actually profiled three Metro homes in this article, titled “Three Atmospheres,” but the Jones house is the only abode that could even remotely be considered mid-century modern.  Just for fun, though, I’m going to include all three houses on the blog. (The magazine’s text is in regular type, while my comments are in italics.)

The residence of Mr. and Mrs. Fred Jones, in Oklahoma City, was designed by Edward Durrell Stone, F.A.I.A.  This is a one-story house built on an open, free-flowing plan.  The ceilings are all high and the rooms spacious.  The very large living area in the center of the house has magnificent antique Georgian-pine paneling and, when divided by an exceptionally tall twelve-paneled chinoiserie screen, it becomes both living and dining areas. 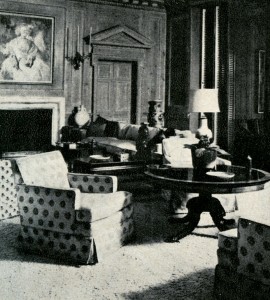 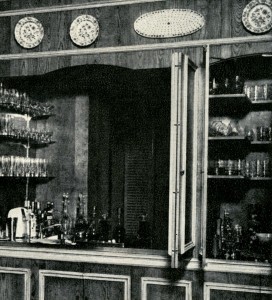 The bar, which opens on two sides to the veranda and to the sitting room. 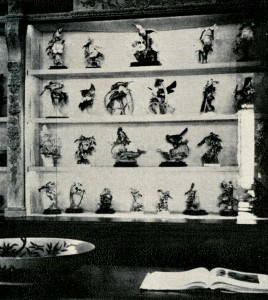 Mrs. Jones’ distinguished collection of Doughty birds is dramatically lighted in an antique bleached-pine cabinet. This cabinet is in an alcove that adjoins the dining room area and gives access to both dining room and kitchen. 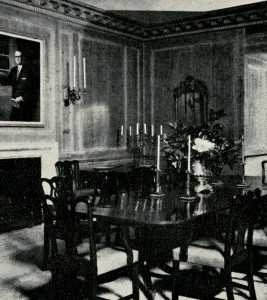 Two specially designed rugs, hand loomed by V’Soske in a scattered design of black flecks on an off-white background, cover the dining room and living room areas, unifying these two rooms and adding further to the air of spaciousness.  Handsome eighteenth century English antiques furnish the room.  Leather in a soft shade of blue covers the chair seats, a perfect foil for the mellow tones of the antique pine paneling.  Mr. Jones’s portrait is by L. Markos. 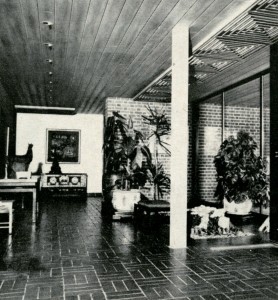 (This) is a view of the entrance hall looking toward the guest wing.  The chest at the far end of the hall is a fine example of Kuwait cabinet work and was purchased in that country by Mrs. Jones.  The wall space of this long gallery is used for displaying some of Mr. and Mrs. Jones’s unusually interesting art collection. 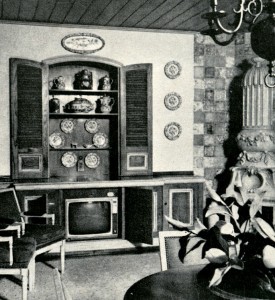 A small sitting room with a charming color scheme of Dresden blue and white is used for viewing television.

Here’s a swatch of Dresden blue: 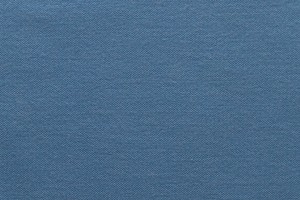 How’s this for a view? 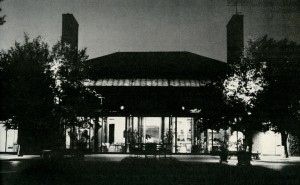 At night, the long skylight as well as the large glass areas on both entrance and garden facades add great drama.  The façade of the house pictured looks across an expanse of lawn to the distant skyline of Oklahoma City. 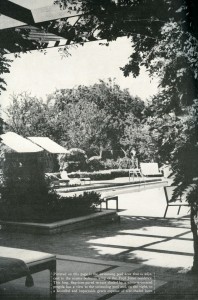 (This) is the swimming pool area that is adjacent to the master-bedroom wing of the Fred Jones residence.  This long, flagstone-paved terrace shaded by a wisteria-covered pergola has a view to the swimming pool and, on the right, to a beautiful and impeccable green expanse of tree-shaded lawn. 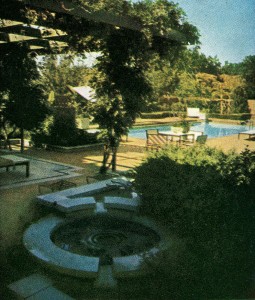 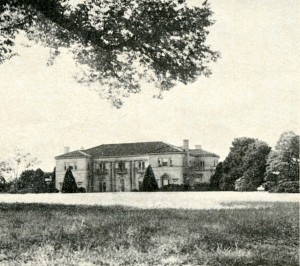 The residence of Mr. and Mrs. Frank Buttram houses one of the outstanding private art collections in America today.  Extensive as it is, however, it was begun as recently as 1918 when they acquired their first work, “La Mere” by Daubigny.  Assembling the collection has required them to travel around the world a number of times.  They were on the first ship to Russia following the revolution in 1918 and early in the ‘twenties began their jade, rose quartz, carnelian, and ivory collections in Peking.  On later trips to the Orient, they added to these as well as to their collections of bronze and porcelain.  Little concerned with the efforts of modern artists, the Buttrams prefer the more beautiful harmonious expressions of a less confused age.  In this diversified collection Spanish, British, Italian, Flemish, Barbizon, and American art are represented, and works of such noted painters as Velazquez, Goya, El Greco, Sir Henry Raeburn, Raphael, Gainsborough, Tintoretto, Titian, Botticelli, Rembrandt, Hals, Van Dyck, and Rubens grace the walls of their house. The Buttrams have shown no reluctance to open their home (which was designed and built to house their varied and exquisite collection) to individuals or groups of art lovers.

Lady Hamilton as a Shepherdess by the British portraitist George Romney, is given a prominent place in the dining salon.  Focal point of the room’s décor, the painting sets the color scheme for the remainder of the furniture and furnishings.  The blue of Lady Hamilton’s gown is used on the walls and again in the satin-damask curtains.  The gold tones in the painting are repeated in the cut-velvet dining room chairs which originally came from a chateau in France. 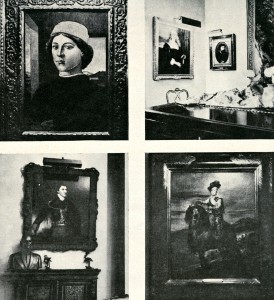 Other important works of art in the Buttram collection, representing various periods and schools, include “Young Man With a Glove” by Botticelli, “Portrait of a Lady” by Van Dyck and “Portrait of a Man” by Hans Holbein, “Portrait of an English Gentleman” by Sir Thomas Lawrence, “Prince Carlos IV” by Velazquez. 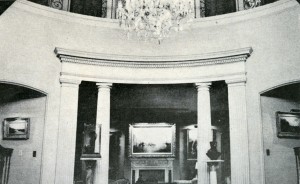 Works displayed in the entrance salon include sculptures and bronzes in addition to several canvases.  Left to right: “La Mere” by Daubigny, “Bronze Sculpture” by Alfred Lenz, “Venetian Scene” by the American painter Thomas Maron, a fourteenth-century bronze vase from the Ming Dynasty, and “Le Batelier sous les Grands Pins” by Corot.

Classic in the Empire Spirit

(This) is the pillared and porticoed entrance façade of the residence of Mr. and Mrs. Frank J. Hightower.  Built by Mr. Hightower’s grandfather at the turn of the century, it is a house of dominant character and enormous style.  The house stands on the oldest residential street of Oklahoma City, where all the residents have maintained their houses in their original state.  The decorative theme of this house is classic and much of the furniture is Empire and period. 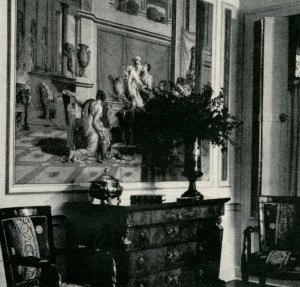 The small Empire entrance hall has grisaille murals depicting the “Loves of Psyche.” 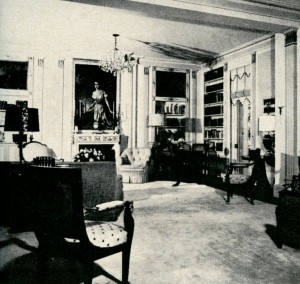 The library, a room of beautiful proportions.  From it one has access by means of a curving double stairway to a secluded walled-in garden.  The walls are white with the pilasters painted a pale beige.  Capitals and other architectural details are in gilt leaf.  The room is carpeted in a very pale beige and the painted panels over the bookcases are in the Empire style.  There are several fine examples of Empire furniture in this room, including two pairs of period fauteuils. 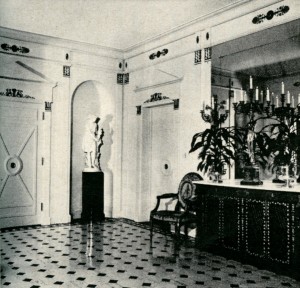 The black-and-white marble-floored entrance hall contains a pair of Louis XVI armchairs with the original needlepoint.

That’s it for the luxurious, art-filled homes.  Here are a couple of images of some of the movers and shakers of the era, including this super cool photo of the interior model of the now-threatened Mummers Theater/Stage Center: 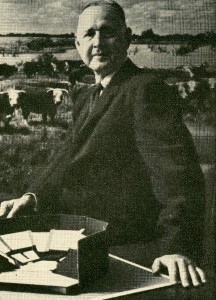 Jack R. Durland, President of the Mummers Theatre, displays a model of the new theatre.  A Ford Foundation grant, along with a campaign among the local citizens, has netted the Mummers the total of $2,000,000, which is to be used to build the new theatre and to defray production costs over the first ten-year period of operation.

I like, this one, too — OKC’s big Kahunas all giddy and salivating over a small model of the Pei plan and probably thinking of the bucket loads of money they will pocket during the Urban Renewal process: 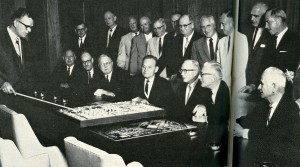 Here’s another great shot of the Board of Trustees of the Oklahoma Art Center and the caption that explains the photo: 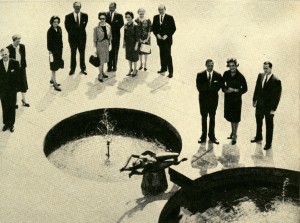 Some of the past presidents of the Junior League, with such recognizable surnames as Hightower, Frates, Connolly, and Rumsey: 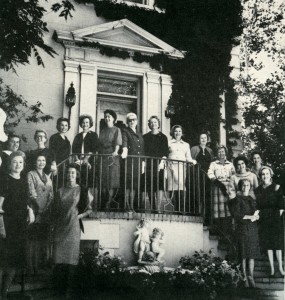 And here’s a great photo of Mayor Shirk in downtown Oklahoma City: 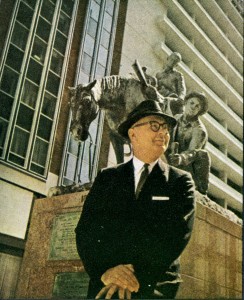 Oklahoma City mayor George H. Shirk poses in front of the Leonard McMurray statue of an ’89er staking his claim.  Located in the downtown Civic Center (site of a former railroad-switch yard), the statue honors the 10,000 pioneers who founded Oklahoma City on the day of “The Run” in 1889.

Finally, hostess extraordinaire and Oklahoma City native, Perle Mesta, wrote an essay entitled, “My Oklahoma,” in which she praises her hometown as being “a modern city … created within a single life span.” 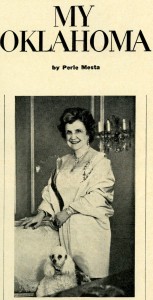 The essay is a long one, so I’m not going to retype the entire thing verbatim, but here are a few interesting (and sometimes pretty hilarious) observations and predictions for the future:

“The saga of Oklahoma City features a company of heroic men cast in dramatic roles in real-life adventures of epic proportions…. Some of those same men who helped lay its foundation and who became legends in their own time are at the helm of its industry and government today.  Edward Gaylord, at 92, publishes the Daily Oklahoman and Oklahoma City Times; and Harvey Everest, President of the Liberty National Bank and Trust Company, still recalls crossing the country twice by stagecoach.  In Oklahoma City it is quite easy for a historian to back up scholarly research with first-hand observations of many of the major happenings in the city’s history.  The pioneers who helped write the city’s early history are either present today or their presence is felt in their descendants.  Oklahoma City’s torch of progress has been passed on from generation to generation, and the pioneering spirit that was characteristic of the early days is as manifest today as it was in 1889.”

“With the supersonic jets on the way, Oklahoma City can become, and furthermore plans to become, an international port of entry.  By the end of the decade it will be within three hours of London, Paris, or Berlin, and Oklahoma City citizens will be able to get to Waikiki Beach in an hour and a half.”

“… the future that Oklahoma City faces knows no bounds…. Oklahoma is again knocking at the door of the future and is impatient for its great tomorrow.  It will go, go, go — and only the sky’s the limit.”

I really love the one about getting to London in three hours — if only that were so.

Finally, a word from our sponsors: 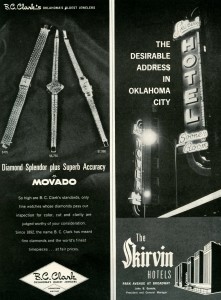 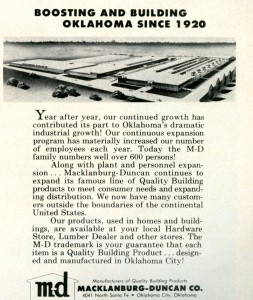 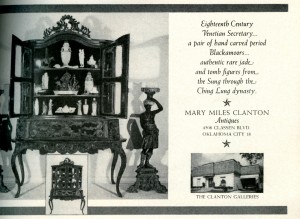 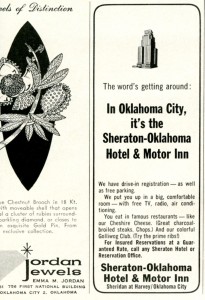 And, that’s it!  What a great trip to the ’60s, aye?!  Thanks again to Robyn for sharing this great issue of Town & Country with us.  Until next week…