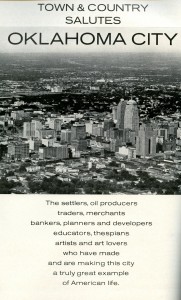 One of the best treasures in Robyn’s collection of mid-century finds is an October 1964 issue of Town & Country magazine, which is dedicated to all things Oklahoma City.  There’s so much goodness in this magazine that I’m devoting two weeks of the Mod Blog to all of the fun stuff inside.

Today, you’ll meet a few of the most beautiful, fashionable, and oh-so socially prominent ladies of the mid-’60s Junior League and country club set who, along with most women of the day, didn’t mind being called Mrs. (insert husband’s name here).  Oh, the hair styles, the make-up, the clothes — it doesn’t get any better than this!  So, without further ado ….

Eastern city slickers still suppose Oklahoma to be a wild, rural, and sparsely populated pioneer state — a la Richard Rodgers’ version.  It is only recently that the Sooner State repealed its Prohibition law, but in every other department it’s more than up to date.  Just scan its vast oil fields, its rising skyscrapers, and, above all, its women.  A sampling of Oklahoma City’s women on these and the following pages prove them to be chic, sophisticated, and good old-fashioned community minded. 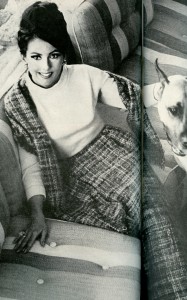 Mrs. Joe Bob Harrison, who is in charge of the Junior League Thrift Shop, with her Great Dane Champion Midas Zee Zup of Mary Dane.  In her own house, Mrs. Harrison likes Roman contemporary décor and black and white with splashes of color.  The Harrisons and their baby daughter, Tiffany, spend summers vacationing at Grand Lake, Colorado.  (She’s) at the Quail Creek Country Club — this colorful outfit of pink-and-turquoise nubby tweed.  Matching stole wraps around a pink worsted-jersey top.

Oklahoma City-born Mrs. Robert A. Hefner III, a sparkling and vivacious woman with three stepchildren and one son, Drew, finds time to work for the Junior League.  There she devotes her efforts toward a speech-and-hearing clinic for deaf children.  An evening gala at the Oklahoma City Country Club requires something bright, something white — white brocade ensemble by Pat Sandler for Highlight.  The maillot-top dress is covered by a shaped jacket fastened with a bow. 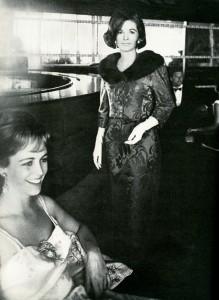 Mrs. Robert T. Stuart, Jr.  Mother of four, including twins, Mrs. Stuart shares her husband’s enthusiasm for bird shooting and skiing as well as raising cattle and horses and showing saddle horses on their ranch in Caddo.  After sundown, a stem of red brocade topped by a jacket collared in Russian sable, by Branell. 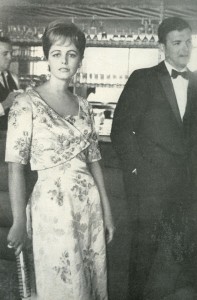 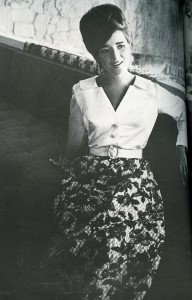 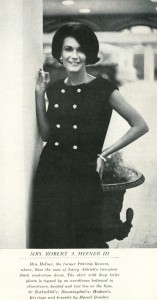 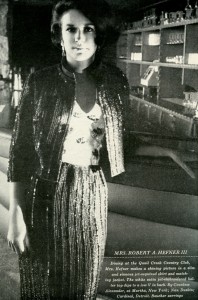 Mrs. Hefner must have been quite charming, indeed, to merit three photos in this spread! 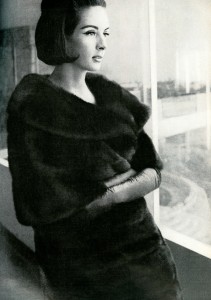 Are you as gaga over those Jackie Kennedy hair styles and all of that brocade as I am?!

I did a little looking around in the Oklahoman archives about these Mrs. (insert husband’s name here) and found that, with the blooming of women’s rights in the late ’60s and early ’70s, most of them ended up in divorce court within a few years of appearing in Town & Country (the only exception may be Anne Connolly — I couldn’t find any information about her after she and her husband moved to Tulsa in the late ’60s.).  Some remarried, some left Oklahoma City to start new lives (Janet Price), some stayed and remained in the public eye (Patricia Hefner), some started their own businesses (Pattye Harrison owned a modeling agency here in town), and one (Barbara McCown) even headed to New York City to pursue a modeling career.  No more Mrs. (insert husband’s name here) for these strong, smart, and beautiful women — I like that!

In addition to photos of these lovely ladies, there are quite a few Oklahoma City business ads in this issue that are pretty entertaining, especially these for Hightower Gifts: 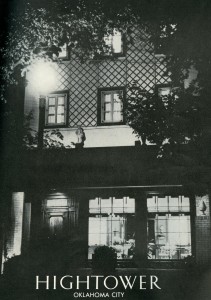 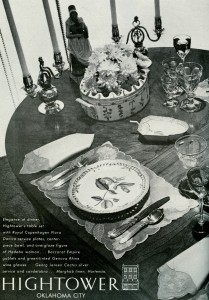 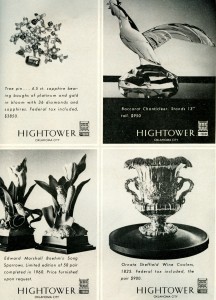 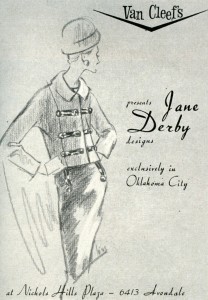 Well, that’s it for now.  Next week, the Town & Country coverage of Oklahoma City continues with a look at the lovely (and now demolished) Fred Jones house, the I.M. Pei plan for downtown, and some of the city’s high-powered movers and shakers.