Highlights from the 2013 AIA Tour 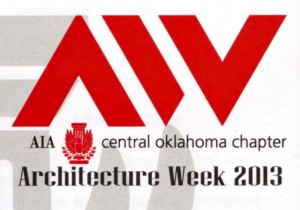 One of the highlights of spring in Central Oklahoma is the annual AIA tour, where architecture geeks and voyeurs like me get a chance to explore some of the region’s best works by our most innovative local architects.  On this, the 10th anniversary of the tour that celebrates Architecture Week, Rex Brown from Oklahoma Modern and Shane Hood from Modern Tulsa made the trek to town to join fellow Squadder, Robyn Arn, and me for the tour, where we hit four of the seven stops.

We began with the Elliott + Associates’ redesigned office space at Lingo Construction in Automobile Alley.  The 12,000sf building is a 30’s-era warehouse that was originally home to the Sharp Auto Supply Company (as the faded ghost signs on each side of the structure attest). 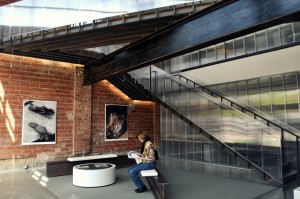 The lobby at Lingo.

The interior was completely gutted and opened up, and clear polycarbonate was used to divide the space into offices without sacrificing the abundant natural lighting provided by large windows on three sides of the building.  Intersecting steel beams in the two-story, open lobby add weight and substance to the design and also provide the structure for the bridge to the second-level offices.  The Lingo offices are an impressive and surprisingly harmonious blend of old and new, light and dark, formality and ease. 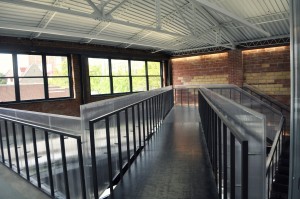 The bridge from the first story lobby to second floor offices.

Our next stop was around the corner at the in-progress “430” project on NW 12th designed by Fitzsimmons Architects.  The two-story, 50’s office building was one of those structures you drive by a million times and never notice, which may be one reason why it was vacant for several years before the current owners, Midtown Renaissance, bought it.  The once-nondescript building is being converted to apartments and is quickly transforming into the gem of the neighborhood. 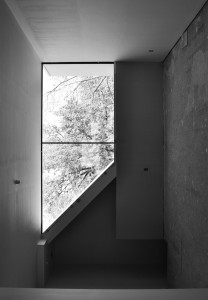 New windows are being added throughout the building to capitalize on natural light.

A third story has been added to create two-story lofts with stunning views of downtown OKC, and, according to the AIA tour brochure, “the north facade is a staccato of sharp edges that responds to the trees lining the front of the building.”  When the 26-unit building is completed, it will surely be one of the premiere living spaces in Midtown. 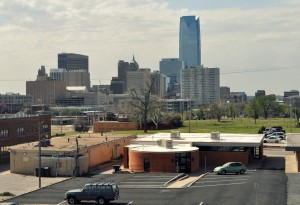 The great downtown view from a third-story balcony at “430.”

While we all wanted to see the rest of the OKC buildings on tour, we agreed that the two Norman homes we read about in the brochure looked promising, so we piled in the car and headed south to OU land.  Our first stop was a house in the lush, mid-century Woodlands neighborhood in the heart of town.  The ranch-style, L-shaped home was originally designed by Glenn Dickinson (of local firm Bailey, Bozalis, Dickinson & Roloff) in 1950 for Guy Steele, Jr. 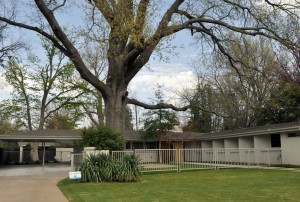 Over the years, the house saw many remodels and a couple of small additions, which chopped up the space and made the nearly 3,000 sf space seem smaller than it actually was.  When the current owner, Brent Swift, bought the home a few years ago, it looked tired and dated and was in desperate need of an overhaul.

Enter Butzer Gardner Architects, who opened up the living/dining/kitchen areas to create one massive space that overlooks the backyard lounge area and original, rectangular-shaped pool.  Along the other side of the L, the three bedrooms were updated and the master bath was beautifully modernized to include floor-to-ceiling windows looking onto a small, private courtyard. 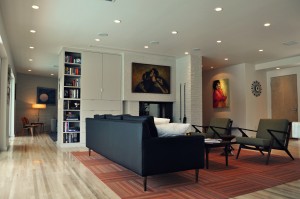 The kitchen and dining room share space with the formal living room (in foreground) and a cozy den (beyond the original brick fireplace.) 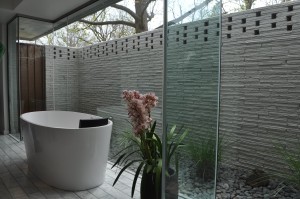 One of the highlights of the home is the wall of windows in the master bathroom.

One of the most impressive architectural details of the house is a wall of cleverly louvered windows that face inward from the street to provide an abundance of light along the bedroom wing while also protecting the owner’s privacy.  An original design element, the louvered windows are the most striking aspect of the home from the front. 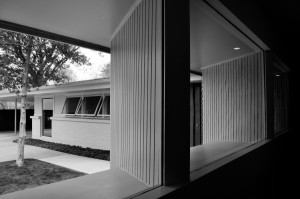 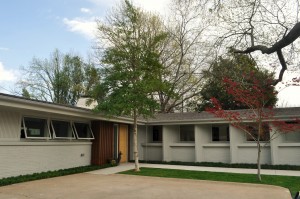 Interior and exterior views of the original louvered windows.  The three push-out windows on the other side of the L-shaped home are a harmonious addition.

This show-stopping home is now for sale so if you’re in the market for updated mid-century goodness, this might be the place for you.

The last stop of the day was perhaps the most interesting.

At one time in the late 70’s and early 80’s, subterranean architecture was all the rage in Oklahoma, with over 300 partially underground commercial buildings, schools, and homes spread throughout the state. One town alone, tiny Newcastle, is home to 15 such houses. In fact, Oklahoma and Minnesota led the way in constructing subterranean buildings and for opposite reasons — Oklahoma because of the extreme summer heat and weather and Minnesota because of the brutal winter cold. These “earth” buildings were famed for being extremely energy efficient and, especially in Tornado Alley, for providing excellent protection against the all-too-common storms we see in this neck of the woods. 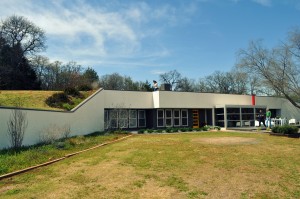 One of the leaders of the subterranean movement here in Oklahoma was Joe Hylton, an eco-architect based in Norman who designed this gorgeous example on the outskirts of town in 1985. The current owners bought the home in 2007 and just completed a 15-month renovation, creating an open floor plan that makes the two bedroom house seem much larger than it actually is. The owner boasts that the home was built to last and has never had a leak or any structural problems, and that’s saying a lot in a state where nearly every house has a crack or two (or more) in the walls. 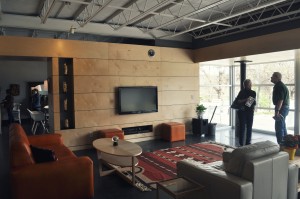 It seems hard to believe that this is a subterranean house with the floor-to-ceiling windows that bring in so much natural light in the living and dining areas.  The newly renovated space was designed by Price Group Architects.

Unfortunately, the day went by so quickly that we weren’t able to visit the other stops on the tour: