This is an article and photo essay from the September 19, 1955 issue of Life magazine. 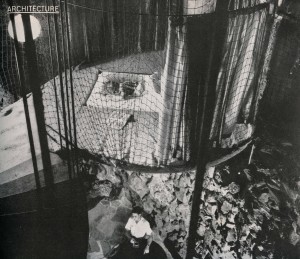 Young Bill sleeps in his net-walled bedroom in a huge hanging saucer which floats above the breakfast area where his father is sitting.

Oklahoma family lives in suspension in a unique structure

Gene and Nancy Bavinger, who live five miles outside Norman, Okla., have the most gaped-at new house in the U.S.  It has no interior walls.  A good deal of its ground floor is water.  Its rooms are suspended saucers.  Its tower sticks out of the trees like the sail of a Chinese junk.  It has drawn so many sightseers that the Bavingers now charge $1 a person for the privilege of looking at the house.  So far they have collected $4,000. 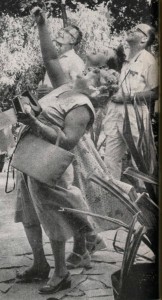 Hilarious sightseers cannot believe their eyes.  Architect Bruce Goff cherishes one woman’s comment: “I couldn’t live in it but I wish I could.”

Designed by Bruce Goff … (who) has no reverence for tradition, the house permits the Bavingers to “live in space three dimensionally.”  They work, play and sleep in a series of five saucers hung on cables from a 55-foot-high oil well pipe inside a round tower.  They hang their clothes on rotating rods in hanging copper closets.  Gene Bavinger, who is chairman of the department of design at the University of Oklahoma, has a studio suspended outside of the tower.  In the entire house there is no window that opens, since the whole house is air cooled. 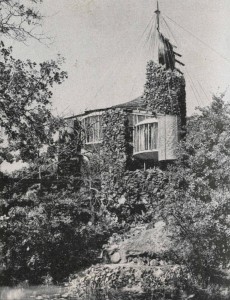 The Bavingers built the house themselves out of big glass chunks and 200 tons of rock, 15 hauled from their own quarry. They started six years ago and moved in last February.  Now, they say, the baby they have just had will grow up a true 20th Century space child. 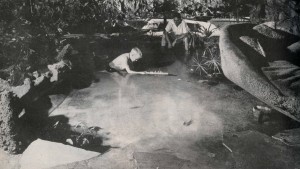 Entrance level of home has pool in which Gene Bavinger and son play with a boat.  The dining area is reached by using stones across pool. 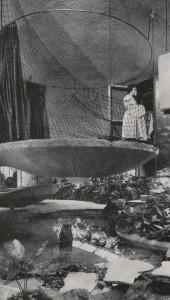 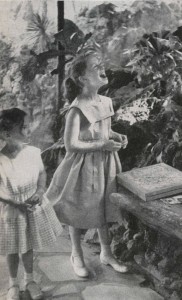 Hooting girl and her baffled companion stare at the Bavingers’ house.  Repeated question: “Aren’t the afraid they will fall out of their saucers?”