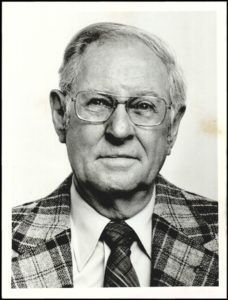 Reynolds & Morrison was formed by two OSU grads, Ivan Moody Reynolds (class of 1924) and Ross W. Morrison (class of 1928).  Before their formation in 1947, Reynolds worked for the State Department of Education in the school planning division (1935-1941) and Hudgins Thompson Ball.  The very prolific firm completed hundreds of projects throughout Oklahoma.  Morrison died in 1984 and Reynolds (pictured above) followed four years later.