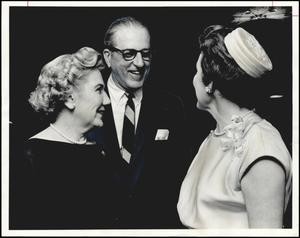 Warren Ramsey was born in Illinois then soon left with his family for New York City.  Life in the Big Apple was difficult, however, so the family once again moved, this time to St. Joseph, Missouri so that Warren’s father could pursue better job opportunities.  Sadly, the good times in St. Joe ended when his dad died soon after Warren turned 15.  Suddenly, young Warren had to help support the family and went to work as a stock boy in the fabric department for a local retailer.  One day, he told his manager that he would like to waive his salary and work on a commission only basis selling fabric.  The thought of paying his young employee nothing, or next to it, seemed like a win-win situation for the manager, and he readily agreed to the deal.  Unfortunately for him, Warren was quickly earning more money than ever because he instinctively knew how to pair a customer with just the right type of fabric.  Quite by accident, Warren had found his passion in life and followed it to Oklahoma City in the early ’30s to become a designer at Harbour Longmire home furnishings.  Soon after that, Warren, who had never taken a design class or even graduated from high school, started up his own interior design business after another short-sighted manager threatened to reduce his salary as a depression-era cost saver.

The business grew quickly, with more and more clients recognizing Warren’s talents as a designer.  Ultimately, Warren’s company grew into a one-stop store, with several shops in such related fields as furniture making, upholstery, and sewing working at his giant Raymond Carter-designed building at 7400 N. Western.  This set up allowed him complete control of every facet of the design process and also enabled him to hire the best workers in each field, including the husband of Civil Rights activist Clara Luper, C.P. Wilson.  At one time, Warren employed over 25 people in his thriving shop.

Here’s another interesting tidbit.  Although he designed hundreds of pieces of furniture, Warren couldn’t draw a straight line.  However, he found it easy to explain to artists all of the original design ideas he had swimming around in his head so that his imaginings could be drawn out and ultimately executed.

Like his friend and one-time partner, Raymond Carter, Warren didn’t like to draw attention to himself.  According to an Oklahoman article written upon his death, Warren “avoided publicity and advertising. He never put the name of his business, Warren Ramsey Inc., on his building … or on the pickups that carried his custom-built furniture. He never granted an interview, except one for his granddaughter, who was doing a high school class project. Few stories in newspapers or trade journals included his name….  He would say, “My reputation is all I need.”

And it was quite a reputation.  Warren’s career in Oklahoma spanned 50 years and included interior designs for countless residences and even many commercial spaces throughout Oklahoma and in Texas, Alabama, Washington D.C., Ohio, and elsewhere.

He died at the age of 86 in 1985, but part of his company, the custom furniture branch, continues to live on.  Warren’s grandson, John Chapline, took over the business in 1987 and it is known as First Circle Furniture today.

On the Market: A Raymond Carter Dream in El Reno