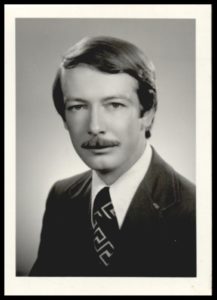 Harold Allen Hite, born November 9, 1937, died at home May 5, 2006. He is survived by his wife of 45 years, Mary Helen; his son Kenneth and daughter-in-law Sheila Ralston, his daughter Aileen Climer and son-in-law Jason, and his grandchildren Cailin and Cameron Climer. A graduate of the University of Southern California’s School of Architecture, Mr. Hite began practice in Tulsa in 1964 and moved to Oklahoma City three years later. Most of his work reflected the strong influences of Frank Lloyd Wright and Bruce Goff, but the buildings he designed – including Covenant Presbyterian Church, Connors State College in Muskogee, and numerous area fire stations – demonstrated a confident touch and a playful artistic voice. He was an avid historical preservationist, restoring much of the Oklahoma County Courthouse to its original beauty. Appointed in 1999 to the Oklahoma Board of Governors of Licensed Architects, he served two years as Chair. He also headed the Professional Conduct Committee and was Chair of the Central States Region for the National Council of Architectural Boards.