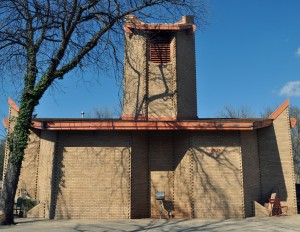 Originally, a 1920s-era, bungalow-style fire station, much like the one at NW 36th and Classen, sat on this busy corner, but the building became obsolete as fire equipment demands changed.  By the ’70s, it was time to build another station on the small corner lot, and Harold Hite was hired to design the new building.  According to an Oklahoman article from 1974, Hite came up with this modern design due to the lot size.  “When the old station was built 50 years ago, streets were narrower,” Hite said.  “Since then, the streets have widened, making the lot smaller.  Also, the city requires a 25-foot set-back, which made the lot too small for a conventional fire station.”  Since Hite had to tailor fit the new station on the lot, he decided to go mod with a little Frank Lloyd Wright mixed in for good measure.  The result is a modest but very intriguing piece of architecture that is a favorite among OKC’s architecture lovers.

9/12/2017: Rumor has it that this station is to be demolished and replaced with a new one.  We will keep an eye on the situation. 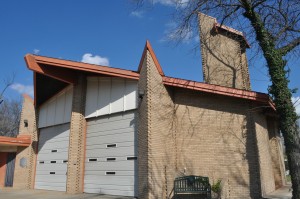