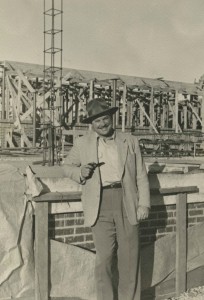 Dow Gumerson was born in 1914 in Pond Creek, OK and graduated from OSU in 1935.  In 1941, he married Jean Gilderhus and they soon had three sons, Bill, Ted, and Jon.  Once he received his license, Dow set up practice in Enid, where he designed buildings for the George Failing Company and Champlin Refining.  When he got the commission to design the Federal Building and U.S. Courthouse in OKC, he and his family moved to the Metro, where Dow remained until his death in 1978.