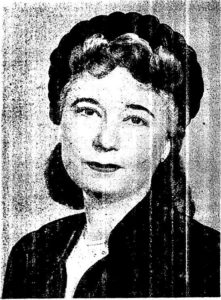 Irene Constance was one of the few women designing and building in Oklahoma during the mid century period.  She was born in 1904 in Missouri and grew up in Oklahoma City.  She married Chris Constance around 1932 and soon began her career as a home designer and builder.  She wasn’t a licensed architect but did design and construct over 200 homes from the late 1930s through the early 1950s.

During the war years, her new homes were’t selling, so being the go-getter that she was, Constance became a realtor with E.C. Stanfield Company and was very successful selling her homes, as well as others throughout the city.  This was one of her hooks during these lean years: “A home of your own is one of the few things left for the mind and heart to cling to.”  Pretty dramatic stuff!

After the war, she and Chris divorced, but that didn’t stop her from designing and building mostly traditional homes in the Cleveland, Putnam Heights, and Nichols Hills.  She also constructed several homes in Capitol Hill and other parts of SW Oklahoma City.  One Oklahoman article touting one of Constance’s designs stated, “Planned and built by a woman, it has all the things the average housewife wants in a home.”  She was so accomplished that she even toured the country talking to other builders and presenting her lecture, “Does Your Home Have Woman Appeal?”

During this time, Constance met Mike Swatek, who owned M.A. Swatek & Company, a general contracting business he ran with other family members.  Swatek was immediately smitten with his female counterpart and later said, “The first time I saw Irene, I thought she looked just like a porcelain figure.”  They were married in 1947, and she immediately went to work on her next project: their new home.

The couple purchased a corner lot in Crown Heights, and she spent the next three years designing and building what is now one of the neighborhood’s most admired homes.  They moved into their new home in 1947 and lived there until Swatek became ill in 1975.  Interestingly, even after her marriage, Constance continued to go by her first married name, at least professionally.

After completing her own home, Constance continued building other houses around town until she and Swatek where hit with a lawsuit by 33 veterans who accused the couple of over charging them for their homes.  Constance countered that she merely built these homes and didn’t act as the realtor in these cases, so she had no control over how the veterans were charged for them.  I’m not sure how the suit ended, but Constance decided that she had enough and was ready to try her hand at something new.  She opened Keepsakes Antiques on Classen and ran the shop until she and Swatek moved to California.  She died there in 1990 at the age of 86.