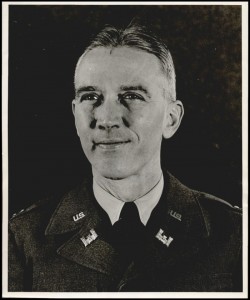 Norman Byrd was born in Missouri in 1911 and moved to OKC with his family, which included brothers Jack and Jerome, when he was 10.  His father, John H. Byrd, Sr., was president of the Midwest Steel Company in OKC and all three boys worked for the company during their youth and became interested in engineering and architecture.  Norman graduated from Classen High School and then Oklahoma A&M (now OSU) and practiced on his own for awhile before he and both of his brothers enlisted at the outbreak of World War II.  During the war, Norman served as a Captain in the U.S. Army Engineers in Germany.

After the war, he returned to OKC and again practiced on his own and with his brother Jack, who was also a licensed architect in OKC upon his return from battle.  In 1947, Norman married Mary Ellen Pyle, and the couple had three children, Nick, Marilyn, and Bill.

Sadly, Norman’s brother Jack died in 1951 and shortly thereafter, Norman joined the teaching staff at OU and quickly became a very popular professor of architecture and engineering for the next 30 years. During his time at OU, Norman also worked with his surviving brother Jerome in planning and developing pre-fab housing, according to Jerome’s obituary.  We would love to know where in Norman this development is located!  Interestingly, Jack’s widow, Helen, married architect Joseph Boaz in 1955 and Jerome later served as Secretary of State under David Boren.

As for Norman, he designed some of the Metro’s best buildings before his death in 1990 at the age of 78.  According to his obituary, Byrd was an avid tennis player and loved classical and chamber music.  He played the flute and “was a student of history, foreign languages, philosophy, and Buddhism.  He was also a good watercolor artist who organized classes and willingly taught anyone anything he knew.  He was never bored with his life.”  Sounds like he was a pretty amazing guy.