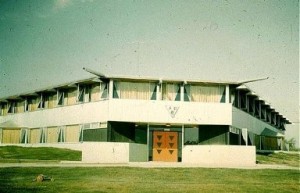 According to the Friends of Kebyar Bruce Goff Oklahoma Guide, the Pi Lambda Phi fraternity house was “in a triangular plan and had a central two-story-high lounge area.  The dormitory rooms were arranged on a second level on the three perimeter sides.  A balcony corridor opened to the central lounge below, with the three stairs symmetrically arranged at each apex.  In addition to the central lounge area on the first floor, there was a dining room, kitchen, additional dormitory rooms on one of the three sides, and a suite for the housemother.  The exterior walls were surfaced with corrugated aluminum, painted red and turquoise.” 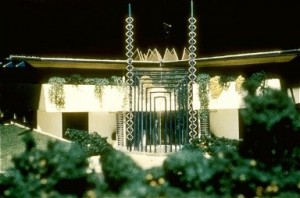 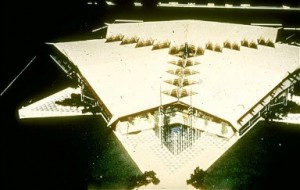 On January 14, 1963 as many of the frat boys were studying for finals on a quiet Sunday afternoon, a fire broke out that sent the building’s residents scrambling to safety.  Smoke filled the building so quickly that many boys had to jump out of second story windows to escape the conflagration.  One very thoughtful roommate tried to save his friend’s architectural project as he exited the building, but the smoke became so dense that he had to scramble out a window and leave the model behind.  While no one was injured, only one of the 58 residents made it out with anything other than the clothes on his back, according to the Oklahoman.

Sadly, Goff’s stunning design wasn’t rebuilt and these few images from the North Carolina State University library archives are about all that’s left of his beautiful fraternity house. 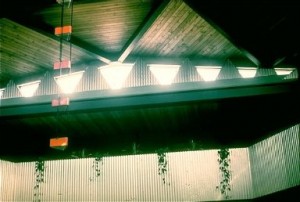 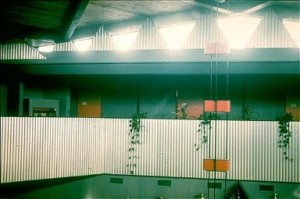 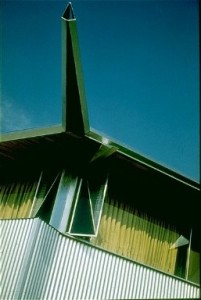 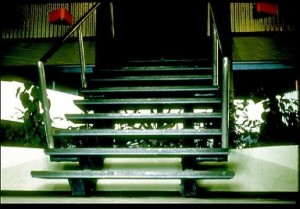 Here are a few images from the OPUBCO collection at the History Center: 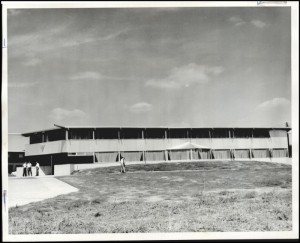 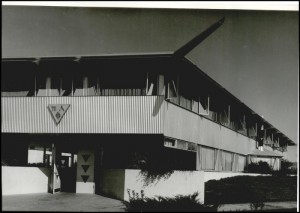 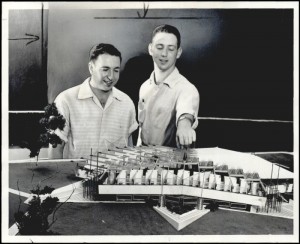 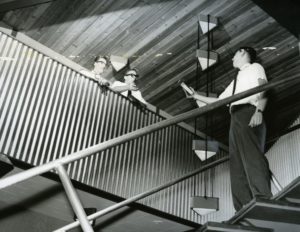 Sadly, the fraternity, which had been on the OU campus since 1922, disbanded in the wake of the fire at the end of the semester, so a new Pi Lambda Phi house was never constructed.  Instead, the Pi Kappa Alpha constructed a house there several years later.

Go here to view the Skyline Ink animation of this stunning building that was part of the 2010 exhibition, Bruce Goff: A Creative Mind.