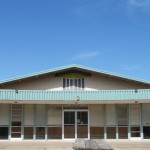 Designed by architect Fred Pojezny of Pojezny Associates, the Youth Center at First Christian Church in OKC is named after Bill Alexander, the congregation’s magnetic and dynamic minister for almost 15 years. At the time of his death in a plane crash in 1960, Alexander’s church had over 3,800 members. Today, the congregation is down to about 300, many of them old-timers, thus the demise of this youth center. A sad end to such a promising beginning.

The following is from an article in the Daily Oklahoman from April 4, 1960, the day after Bill and his wife died:

“Rev. and Mrs. William Alexander were killed Sunday night in a plane crash, along with pilot M.S. Jimmy Shuman.

Alexander was 45 years old and his wife, Mary Louise, was about 36.

The crash ended the extraordinary ministerial life of the pastor of Oklahoma City’s First Christian Church.

Their twin-engined plane skimmed over a heavily traveled highway and group of homes into a parking lot in suburban Camp Hill, killing all three.

They had left Downtown Airpark in Oklahoma City about 1 p.m., for Hershey, PA, where Rev. Alexander was due to be the main speaker at the opening of a three-day conference of the Pennsylvania Association of Chief School Administrators.

A spokesman for the FAA said contact was made with the plane from the Harrisburg airport shortly before the crash. The spokesman said Shuman, the pilot gave no indication he was in trouble.

The FAA spokesman identified Alexander and his wife.

Rev. Alexander left his “Church of Tomorrow” Sunday to fly with his wife, Mary Louise, to Hershey, PA, for the speaking engagement. He had been invited many times to that city to make speeches.

Although he flew commercial planes much of the time, he often made charter flights and Jim Shuman had been his pilot in recent months.

Rev. Alexander was more than a minister. He had also played in orchestras, been a vaudevillian, was a Republican candidate for senator in 1950 and a World War II correspondent for The Daily Oklahoman and Oklahoma City Times.

He has been pastor of the First Christian Church since November 1942. His first pastorate was in Stroud, a post he held from 1935 until 1940, when he took two years leave of absence for graduate work.

Rev. Alexander was born in Shelbyville, MO and received his elementary and high school education in St. Louis. His father was pastor of the Memorial Boulevard Church in St. Louis. In an interview for a national magazine several years ago, he said that after high school he entered Missouri University to “study anything but theology.” He stayed in college a year and quit to take a $250 a week job as country club floor show master of ceremonies.

Finally he decided to enter the clergy and enrolled at Phillips University, Enid. A year later, he transferred to the University of Tulsa, where he received his degree in 1939.

While attending both Phillips University and the University of Tulsa, Rev. Alexander offered his services as student-pastor to the 34-member congregation at Stroud for $7.50 a week.

The 45-year-old pastor took a leave of absence from the Stroud church to attend the University of Chicago for graduate work. While in Chicago he was, for a short time, pastor of the North Shore Christian Church. In 1941, he became pastor of the McCarty Memorial Christian Church in Los Angeles. He held the post for one year before coming to Oklahoma City.

Rev. Alexander had written sermons for church publications, a movie script, poems and radio scripts. Many of the radio scripts wree for his own shows: “Oklahoma’s Little Church Around the Corner” and “It Tolls for Thee.”

He had been the recipient of two honorary doctors degrees.

Rev. Alexander had a great interest in youth, their problems and progress. He organized what has been called one of the greatest protestant youth programs in the nation.

The husky, red-haired minister ran unsuccessfully for the US Senate in 1950 on the Republican ticket against Mike Monroney.

This legal name was William Hamilton Bill Alexander. The “Bill” became a part of his name in 1950 through court action.

Alexander served as National chaplain for the Republican party when President Eisenhower was elected for the first time in 1952. He and the president became close friends during the campaign.

The minister, of 4220 Harvey Parkway, once talked an Oklahoma City gunman out of robbing him late one night. The thief returned the overcoat and wallet he had taken.

* In 1951, during his time as chaplain for the Republican party, Bill and his first wife, Charlise, went through a divorce, in which she charged that she had been “unrelentingly dominated” by him throughout their marriage. She also stated that, “during her marriage her personality was entirely subjugated, and the normal considerations a husband has for the expressions and opinions of a wife was absent. His temperment was such that her “status more nearly approaches that of a servant than of a wife and companion. It was also charged Alexander had told his wife and others that he had no love for her.”

In January 1953, Mrs. Alexander married recently divorced F. Marshall Hulett, a local attorney and Bill’s campaign manager when he ran for the U.S. Senate. In an interesting twist of fate, Bill wed Mr. Hulett’s ex-wife, Mary Louise in December 1954, and it was she who was with him on that fateful flight in 1960.

Alexander’s philosophy that church should be centered on the younger members of the congregation is how the Youth Center came to be,  He reasoned that, if kids were at church playing games, dancing, or bowling, they wouldn’t be out getting into trouble.  While a common philosophy in churches now, from newspaper articles of the day, this thinking got a lot of other ministers, priests, and church leaders throughout the nation pretty riled up; church was supposed to be a serious place of reflection and honoring God, after all.

Apparently, a lot of people liked Alexander’s brand of feel-good, fun religion, because his congregation continued to grow and flourish through the 1950’s, which is when The Church of Tomorrow (designed by R. Duane Conner of Conner & Pojezny) was built.  This Youth Center was to be built soon after the church, but there were few funds left after the church was completed in 1956, and the call went out for drives to raise money to get the Youth Center built.

In April 1960, the Youth Center was still just a dream when Alexander, his wife, and their pilot were killed in that tragic crash.  The congregation was devastated.  But, in one last gesture of his love for the youth of the church, Bill Alexander’s life insurance payout went straight to the fund for the Youth Center, and it was built and dedicated in November 1961. 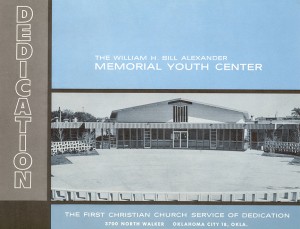 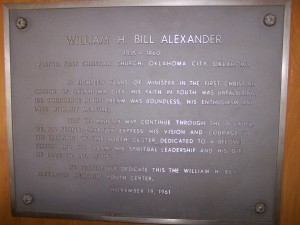 Unfortunately, with an elderly and dwindling congregation, the church has had little need for a Youth Center for several years. 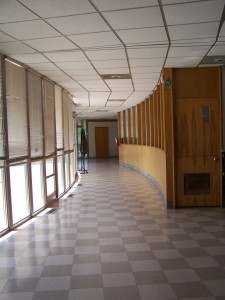 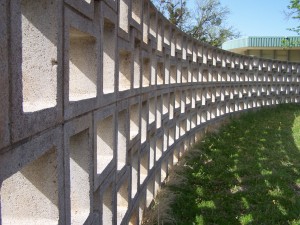 In early 2008, a development group announced plans to tear down the Youth Center and neighboring Disciples building and construct housing, a grocery store, and shops on the 16-acre plot of land, but community protest and the economic slowdown of 2008 quashed those plans.  As a result, the Trinity Episcopal School leased the old Youth Center for a few years, and the building is safe … for now.

The entire First Christian Church campus was added to the National Register in 2011 but is up for sale now, so who knows what’s in store for this building.