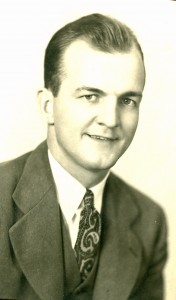 Fred Pojezny was born in OKC in 1920 and attended OSU.  World War II broke out during Pojezny’s last year at OSU and he left college shortly before graduation to enlist in the Navy, spending the war years aboard the U.S.S Prometheus and as part of a camera party in Norfolk (he received his diploma in 1943 while in the Navy).  After the war, he reconnected with former OSU classmate R. Duane Conner, and they formed Conner & Pojezny in 1946.  Upon the dissolution of the firm nine years later, he started his own firm and designed and developed various shopping centers around town until his retirement in 1982.  He died in 1999.