The Mid-Continent News Building in Midtown was quite a change of pace in an area comprised of ’20s-era apartment buildings, a smattering of turn-of-the-century homes, and the Plaza Court shopping center.  It was the first “modern” building in the still-mostly-residential area but signaled that Midtown was on its way to morphing into a business district, mainly due to the increasing expansion of the large St. Anthony’s complex a few blocks away.

The new structure was designed to take the greatest advantage of a small, rectangular lot surrounded by homes (all of which are now long gone).  Here’s the plan, along with photos of the architects, R. Duane Conner and Fred Pojezny, that appeared in the September 1951 issue of Progressive Architecture: 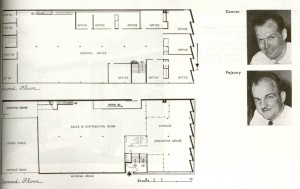 According to the article, “the entrance is placed on the north and a cut-in curb strip on this side provides for temporary parking.  For operational reasons, placement of offices worked out best at the west end of the building, but since the western summer sun and heat can be excessive in this locality, a saw-tooth plan scheme was developed for the west wall, so that light, but no direct sunlight, enters this area.” 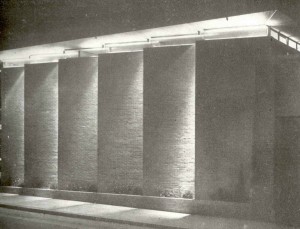 “To provide a pleasant atmosphere for work, the building is equipped with a music-playing system (can you say Muzak?) with individually controlled, ceiling-mounted speakers.”  Here’s an interior shot of a common office area: 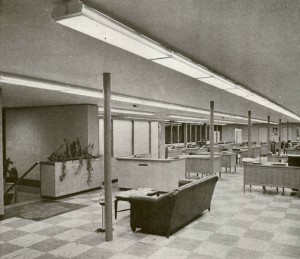 And, here’s a photo from the magazine spread that shows the adjacent and very interesting covered parking structure that looks very Wrightian:

In addition to Progressive Architecture, the Mid-Continent News Building was featured in the April 1952 issue of L’Architecture d’Aujourd’hui and also in a Japanese publication that highlighted the twenty best examples of modern architecture in the USA in 1950.  Finally, the innovative building was honored in the Outstanding Building/Commercial category by the Oklahoma chapter of the AIA in 1953.

When Mid-Continent News moved out of the space into a larger building in the early ’80s, this building was heavily altered and most of its most dramatic and interesting features, like the louvered windows, were covered with red brick.  Here’s how the building looks today: 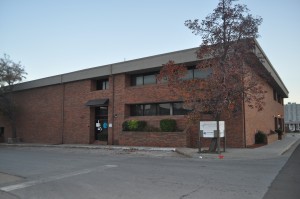 UPDATE: 2/15/17: Rumor has it that the new owners of this building will demolish it to make way for new development.