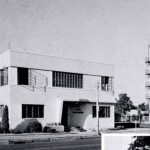 Harmon Construction was the general contractor on this sweet building designed by Hudgins Thompson & Ball.  The building has been heavily altered, but the tower has been a popular meeting place (probably because it’s the epicenter of the food court) during OKC’s annual Festival of the Arts for years.  Even with that, the building and tower are slated to be demolished and replaced with the Robert A.M. Stern-designed OG&E tower and complex: 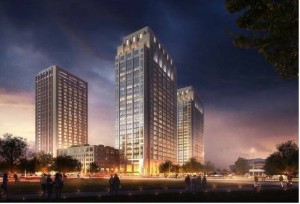 According to The Oklahoman’s Steve Lackmeyer, “Chicago-based Clayco, meanwhile, is looking to start construction on a 25-story OGE Energy Corp. headquarters on the former site of Stage Center, just south of the Hines development. The Clayco project also envisions building a second, 25-story office building and two 26-story apartment towers. Clayco’s timetable calls for all this work to take place over the next couple of years, though the company’s request for tax increment financing remains a big uncertainty that must be resolved first.”

So, we’ll see what happens….