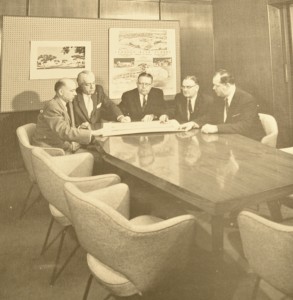 Hudgins Thompson & Ball was formed by architects Ed Hudgins and Ralph Ball, along with engineer Verlin G. Thompson.  Hudgins and Ball were Oklahoma A&M (now OSU) alums and had worked together since they both graduated in 1931.  The duo formed their own firm, Hicks & Moore, in the late ’30s and worked on many WPA projects throughout the Depression years.  At the outbreak of World War II, they were eager to take on military assignments, but the U.S. Government wanted architecture firms to include engineering departments, so the pair teamed up with engineer, Thompson, to create Hudgins, Thompson & Ball in 1942.  Soon, the firm became the most successful in the state and was responsible for designing schools, government buildings, offices, and restaurants throughout Oklahoma; in fact, it’s difficult to drive through any town in the Sooner State and not find a building designed by the prolific firm.  In 1958, HTB was named #30 of the nation’s top 100 architect/engineering firms.  By the ’80s, however, the firm had been accused of shoddy design and construction on a few projects, including at Seminole Junior College when outside engineers declare that several structures were so poorly designed that they recommended the buildings be demolished just a few years after they were built.  Scandal continued during David Hall’s administration, and the company was sold then folded in the early ’90s.