On the Road: Unitarian Meeting House and a Special Surprise

After the Taliesin experience, I was on to Madison to see the Unitarian Meeting House Wright was commissioned to design in 1946 (though the original structure wasn’t finished until 1951). Most FLW fans know of his history with the church – his parents were founders and he was a member as well – and his previous design for the brilliant Unity Temple in Chicago in 1905.

Unlike the square, sheltered Temple, the Meeting House was to move in a different geometrical direction: the single or double equilateral triangle. All aspects of the structure reflect this pattern from the floor grid to the soaring prow of the auditorium window wall. 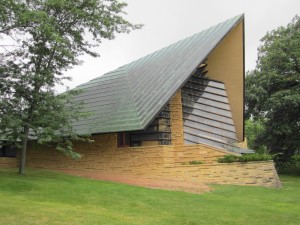 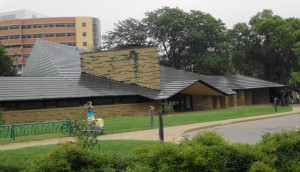 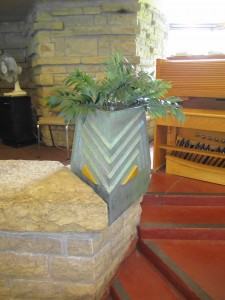 The altar now and a vintage image of it: 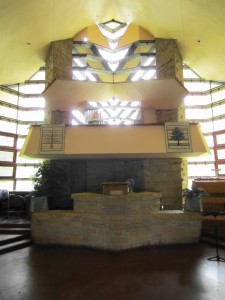 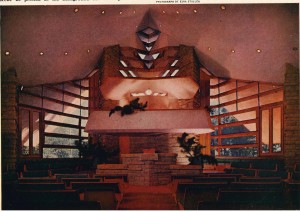 Because the congregation was modest with corresponding funds, volunteer work was used wherever possible. They hauled limestone to the site (originally overlooking farmland), built furnishings and even wove the drapery that hung between the auditorium and the hearth room. A drapery sample is on display as well as the original andirons (decommissioned early on as too hazardous for children). 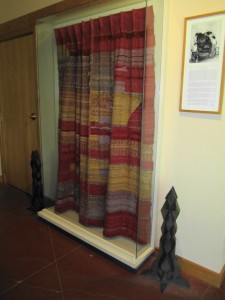 The moveable “pews” fold down to create table tops and are still in use today. 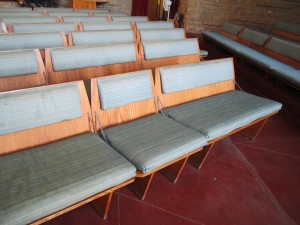 A long loggia now has administration offices on one side where the original classes were once held. 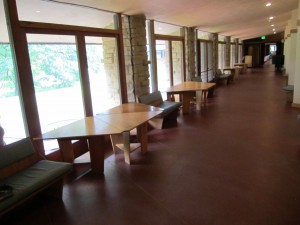 At the end of the loggia is a living room that was to be part of the minister’s living quarters, but was never fully realized. 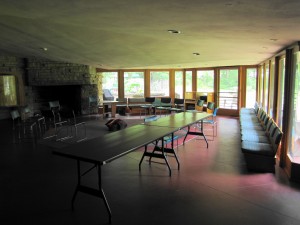 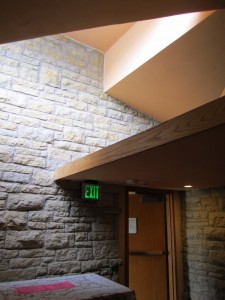 The tour was led by a member of the congregation and you can definitely feel the love and pride they have for this special place. 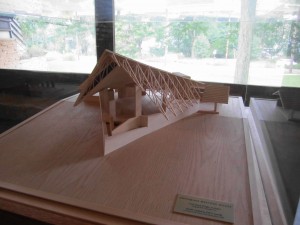 Next, I dropped by the Monona Terrace Convention Center on a downtown walk to see the finished work of an early model on display at Taliesin. Wright had proposed such a space for Madison as early as 1938 and had finally been asked to design it in the late 50s. After decades of delays it was finally realized in 1997. It’s pretty close to the early model I saw and definitely reflects his Guggenheim phase. 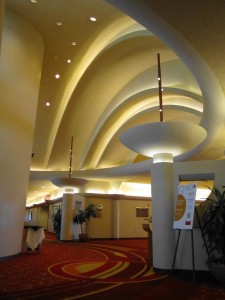 My next FLW stops will take up a whole blog, but I came across a time capsule on the Wisconsin shoreline on my way to Kenosha that I really wanted to share with the group so am adding it here. 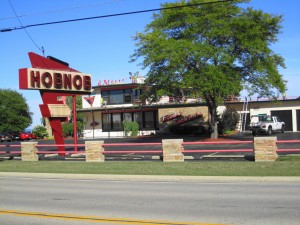 The Hobnob supper club is a lovingly preserved building (they were redoing the roof the day I drove by) with a menu that is just as preserved: steaks, seafood and generous old school cocktails. 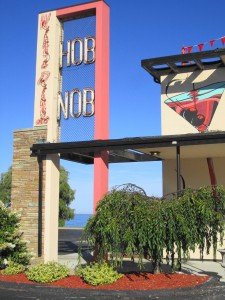 It wasn’t open at the time I stopped in, but the staff was very welcoming and let me take pictures of the amazing interior. It looks like the coat room is still used on a regular basis. (Yes, those are metallic gold tiles on the counter front.)

The curvy, custom seating areas are quite amazing. How could anyone sit there for dinner and not feel special? 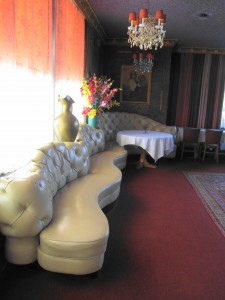 The bar area also oozes glamour from the cozy round booths to the metallic room divider. 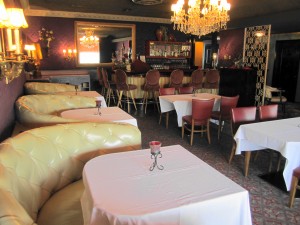 So, if you ever find yourself driving down Highway 32, stop in for dinner or a drink. Let’s keep gems like these in business!

On the Market: A Contemporary Oasis That’s Full of Surprises On the Road: The Johnson Wax Building and Wingspread
Click here to go back to previous page