The Funky Goodness of Tamac Pottery

While the creations from Frankoma get most of the acclaim and glory in these parts, several other pottery companies called Oklahoma home in the post-war years and produced some pretty impressive lines.  My favorite of all is Tamac, a small company located in Perry that was founded by two couples, Leonard and Marjorie Tate and Allen and Betty Macauley.  Tamac was established in 1946, and the unique name was derived from the first letters of the couples’ last names, “Ta”te and “Mac”auley.  Cute, huh?

This is how the story goes:  A native of Perry, Leonard Tate wanted to go in business there after graduating from the School of Business at OSU in 1942, but WWII forced him to change his plans.  He enlisted in the Navy instead and bravely served in the China-Burma-India theater.  As the war wound to a close, Leonard was sent to a hospital in New York to recuperate and it was there that he met the lovely Marjorie Hemke through mutual friends.

An artist with a degree from Brown University, Marjorie was working as a floor covering designer at Congoleum-Nairn and befriended a fellow designer there, Betty Macauley, and Betty’s husband Allen.  The two couples became fast friends and began making pottery together in their spare time.  The men couldn’t find jobs in New York in the days after the war and decided to turn their hobby into their profession.  They realized that their combined talents — Leonard as a business and sales guru, Marjorie as a sculptor and designer, Betty as a ceramicist, and Allen as a mechanical whiz — would serve them well in their new venture, so the foursome left New York in 1946 to fulfill Leonard’s dream of starting a business in his hometown of Perry.

The men added a workshop on the back of Leonard’s dad, Henry’s garage at 920 Cedar Street (which still remains), and the ladies got to work designing and producing Tamac’s first beautifully biomorphic pieces in a creamy Butterscotch glaze.  Soon, new glazes were added: sassy Avocado, lush Frosty Pine, chocolately Frosty Fudge, and cheerful Raspberry.  (The butterscotch glaze was discontinued early on because it didn’t fire well.)  As for dish design, the crazy amoeba-shaped plates and bowls with white “lace” trim easily stack to make wonderfully layered works of art, while cups and salt/pepper shakers are ergonomically contoured to easily fit into hungry hands — well, hungry right-handed hands, that is.  No lefty cups in this line!

According to the Cherokee Strip Museum website, “work schedules at the new pottery plant typically involved 12 to 14 hours per day for the two young couples. Zoma Tate (Leonard’s mom) helped regularly in the retail store and Henry worked part time where needed. Soon they began producing a set of dishes, known as “One-Handers,” for use in backyard barbecues, a fad which they correctly predicted would become popular throughout the U.S. Each set consisted of a 9-inch free-form dinner plate and saucer cast in one piece, with a corner built up in three grooves to hold silverware; a large cup and a tumbler. The sets got their name because all of the pieces could be easily balanced with only one hand. The cup had a tunnel to fit the index finger and thus insure a tight grip.”  The one-hander was so popular and became a best seller that was featured in national magazines of the day.

Apparently, people loved Tamac’s innovative and uber modern freeform designs because sales were so brisk that the fledgling garage-based company needed to expand in a big way just two years after its inception.  As authors Phyllis an Tom Bess explain in their book, Frankoma and Other Oklahoma Potteries, “at that time Oklahoma was promoting industrial growth and diversification by donating free land to qualifying businesses.  Tamac took advantage of this promotion and received a good site along Highway 64-77, just south of downtown Perry.”  The Tates and Macauleys raised the $30,000 they needed for the new plant building and machinery (including a kiln that could be used 24 hours a day) and constructed a quonset hut for their free parcel of land.

The quonset hut is still in use today and now houses an industrial paint shop.

As for Tamac, the pottery along the busy highway was open seven days a week and offered tours to all passersby.  Here are other pieces in the Tamac line that tourists could stop in and purchase:

In addition to selling through their shop, Tamac’s wares were also sold in various departments stores around the region and as far away as Garfinkle’s in Washington D.C.  With all of the success came problems, however.  Although the company employed about 10 people and around 300 handmade pieces could be built a day, the demand for higher production volumes, better distribution, and qualified sales representatives kept the company from realizing great financial success.  All of the hard work and stress soon took its toll on the Macauleys, who became weary of spending so much time at the company that they could be devoting to their young family.  In 1950, they sold their interested to the Tates and got out of the pottery business altogether.

Even though business was brisk, Tamac never became a hugely profitable venture and the Tates filed for bankruptcy two years later, whereupon Leonard’s uncle, Earl Bechtold bought the company and ran it until the ’60s.  During that time, he expanded the plant and even landed a distribution deal with a company in far-off Canada.  The pottery sold again to the Hladik family and did okay until the highway was rerouted and tourists stopped popping by altogether.  Tamac closed forever in 1972.

The Macauleys settled back in their home state of New Jersey, while Leonard Tate ended up working for the Federal government.  His various assignments landed the Tate family in Saipan, Iran before finally settling in Winchester, VA.  Leonard died in 1987, but Marjorie led a full and artistic life until she passed away at the age of 95 this past June.

“Tamac’s forward-looking design, conceived nearly 50 dears ago, is still considered significant by today’s artisans. The Dallas Museum of Art … featured an exhibit on Hot Cars, High Fashion, Cool Stuff. Designs of the 20th Century. The objective was to tell the history of design in the 20th century through decorative and fine arts using pieces on loan as well as from the museum’s own collection. Among the latter were several examples of Tamac pottery. Other pieces shown included a Ferrari, a vintage Rolls Royce, Dior and Coco Chanel fashions, art deco work by Erte, and pieces by Mies van der Rohe and Frank Lloyd Wright. Pretty heady company for the Perry-made pottery.” (from the Cherokee Strip Museum website)

Today, you can still find Tamac pieces around town in various antique malls and on eBay for reasonable prices, so if you won’t have to spend a ton to amass an impressive collection of these wonderfully fun, amoeba-shaped dishes.

Finally, a little of Tamac lives on right here in OKC.  The original owners of the iconic House of Clay, Norman and Levern Meriwether got their start at Tamac before moving to OKC and setting up shop here.  The House of Clay is still in the family and continues to do a brisk business today.

To view more pieces in the Tamac line, go here and here.

To learn more about Tamac, Frankoma, and the Sooner State’s other potteries, I highly recommend Frankoma and Other Oklahoma Potteries.

Finally, here’s an interesting article with photos from the August 3, 1947 edition of The Oklahoman (click to enlarge): 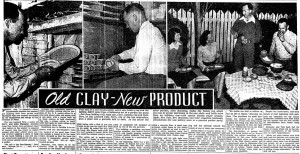 On the Market: A Raymond Carter Dream in El Reno Your Home, Circa 1953
Click here to go back to previous page