You Are Cordially Invited to Stay at the deVille Motel

When Penn Square Mall opened in 1960, developers Jay Hickox, Jim Milligan, and Sidney Davidoff saw a golden opportunity to capitalize on all of the traffic streaming in from around the state and opened a motel within walking distance to encourage weary shoppers to rest a spell before returning home.  The $750,000, 93-room inn was given the luxurious and very French moniker, deVille Motor Hotel, and welcomed 2,000 curious locals and guests on its opening day.  They were obviously impressed with what they found because the motel, which sat along Route 66 and was just blocks from hopping Classen Circle, quickly filled with guests.

Unlike many motels that abutted busy thoroughfares, the deVille sat back on its lot a bit, bordered by a protective lava rock wall that afforded much-desired privacy away from the hustle and bustle of traffic just feet away.  Designed and landscaped by Thomas Roberts, the U-shaped motel surrounded a large pool and a kids’ recreation area where families could rest and play before heading on to their next destination: 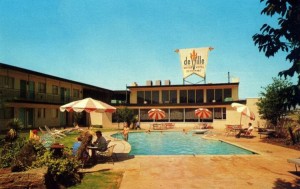 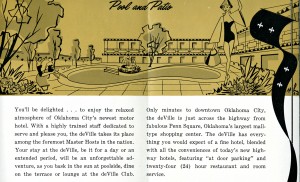 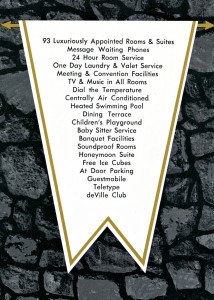 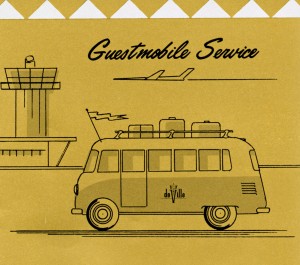 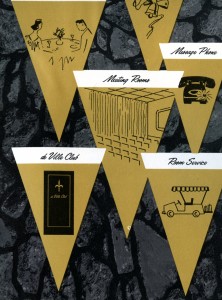 Lucky deVille patrons also had a chance to hang out at the hopping Diamond Jim’s lounge in the motel: 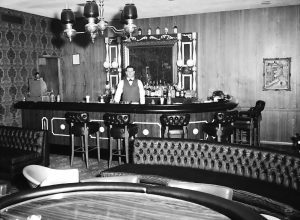 As for the guest rooms and public facilities, they were decorated in a french contemporary design, according to an Oklahoman article — I’m not sure what that means, but it sounds divine, especially if the rooms looked anything like this illustration from the motel’s marketing pamphlet:

The motel’s owners definitely knew how to market their new venture.  Hickox and Milligan owned the very successful Storybook Homes, while Davidoff had been the manager of the biannual Parade of Homes tour for many years, so all three men thought up interesting ways to get people to go to the deVille.  One thing they did was sponsor the winner of the 1960 Miss Oklahoma City pageant, Northwest Classen High School’s Sandy Ellis, as she moved to the state competition to seek the title of Miss Universe:

The lovely Miss Ellis — measurements 37-24.5-37 in case you were wondering — was feted with numerous receptions and parties at the swanky motel before the state competition.  She didn’t win at the state level, but I’m sure all of the parties and acknowledgment of her “beauty, charm, and personality” made Sandy one happy high schooler!

One frequent visitor to the deVille was a representative from Mr. Harold’s from Kansas City.  In the mid-’60s, the company placed several ads in the Oklahoman enticing men and women with thinning hair to go to the deVille to find the “answer to baldness.”  What was the answer?  Wigs, apparently: 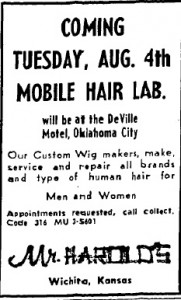 Members of the Oklahoma City Now and Then group on Facebook remember fun times at the motel.  Keesa recalls:

I lived across the street from the DeVille in 1965. The Lovin’ Spoonful stayed there one night, probably for a concert here. I remember they were interviewed on the radio the next day. My sister and I saw them come out of their room, likely going to the bar.

Grew up close to the DeVille. We would go swim there. One time we met Johnny Rivers, who was staying there while he was in town for a concert. Nice guy! And great place. 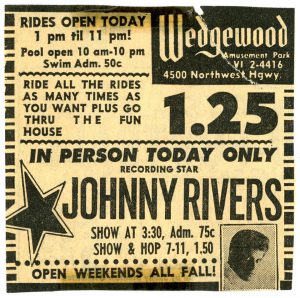 Over the years, the motel saw many a convention, dance, reunion, and probably an illicit tryst or two, all of which kept the manager on his toes, but by 1967 the owners decided to move on to other ventures and tried to sell their little bit of French heaven.  They found a buyer, but he reneged on the agreement, which landed all of them in court two years later trying to sort out how much one party owed the other.  I guess that sad experience soured Milligan, Hickox, and Davidoff because they decided to hold on to the motel after all.

A tornado in 1970 caused some damage to the deVille, but it kept operating until the owners decided to incorporate the 20-year-old building into their Richmond Square office complex surrounding the motel in 1982.  The deVille was all but demolished, with only a few walls and the concrete slab remaining once demo was complete — only the pool remained untouched.  The new, $3.7 million Travelodge Motel opened in 1983 and boasted 51 650 sf suites and a new restaurant called the Fairfax.  The motel and office complex comprised 35,000 sf of office and room space catering to small business clients.  Here’s the complex under construction:

A few years later, the oil bust finally ended the original owners’ tenure, and the motel saw several owners and more renovations in quick succession over the following years.  Today, the Travelodge looks tired, depressing, and really pretty creepy, and the only reminder that suggests the inn’s glory years as the deVille is the large and still-well-maintained pool: 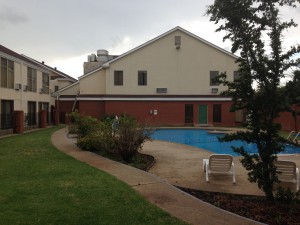 UPDATE 8/22/16: The former deVille is now closed and fenced off, and we aren’t sure what will happen next with the property.

UPDATE 3/1/17:  The old motel has been demolished and will be replaced with an OnCue.