While many of us were focused on trying to save the Union Bus Station and pals in downtown the last few months, one of my favorite buildings, the old Fox & Horn restaurant, was unceremoniously demolished and no one, it seems, noticed.  It’s too bad because the former restaurant, located at 6501 S. Western, still maintained much of its charm and beauty in spite of a bland makeover sometime after the eatery went under in the late ’80s: 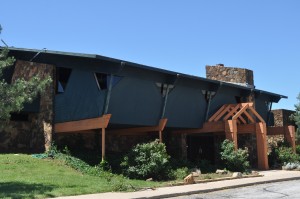 If you think the building looks great here, check out what it looked like when it was shiny and new back in 1974: 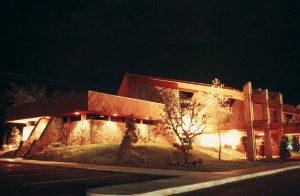 I get goosebumps every time I see this image and realize that this gorgeous creation was right here in Oklahoma.  Here’s how it happened.

This was Gary McCowan’s first professional project.  When developers J.W. Mashburn, Stan Harrison, and Bill Cleck decided that the south part of town needed an upscale restaurant, they were originally thinking of an early-English design for their steakhouse, to be called Fox & Horn.  They contacted architect Robert F. Reed about designing the building and Reed brought in his young employee, McCowan, to work on the project.  Unwilling to do work that he didn’t feel passionate about, McCowan told his boss that he’d rather quit than design something he wasn’t proud of.  According to McCowan, “he (Reed) turned the project over to me, suggesting I plead my case to them (the developers).”

And that’s just what McCowan did.  After meeting with the developers, they quickly abandoned their ideas of a Tudor design and were enthusiastically on board with Gary’s plan to create something bold and wholly original.  Here are drawings of this spectacular organic space…: 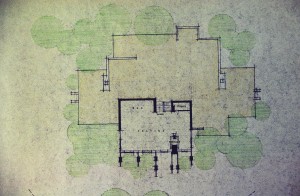 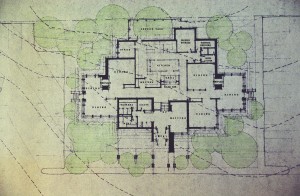 … and the original model for the building: 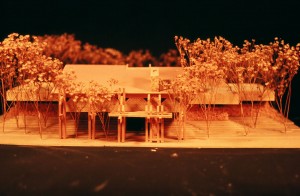 Now for the good stuff — a few interior shots.  Here’s one of the simple but stunning staircase and rock wall: 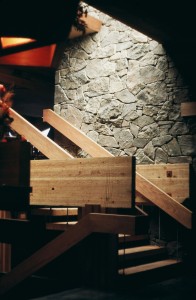 And look at this fabulous and very elegant lighting that Gary made: 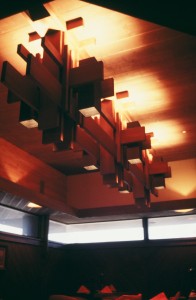 All you can say to that is wow, but that’s not even the best part!  Gary also sent a photo of the very sculptural sign for the restaurant: 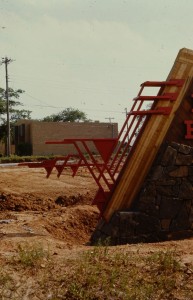 I cringe whenever I think that this beauty and the light boxes probably ended up in a landfill somewhere.  Ugh!

Soon after its opening in 1974, The Oklahoman called the new eatery “one of the most beautiful restaurants in the city,” and customers must have agreed because the Fox & Horn became one of the places to dine in the Metro: 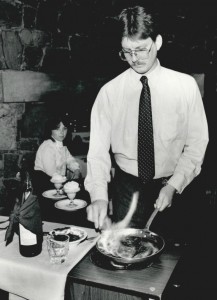 The building design was so integral to the success of the establishment, in fact, that the building was included in early advertisements: 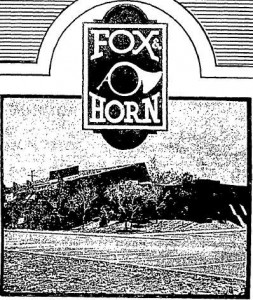 Just two years after opening, the owners were looking to expand their very successful restaurant and called McCowan directly this time to get his ideas for the new space.  Here’s what he came up with: 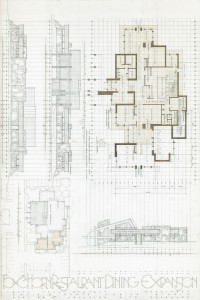 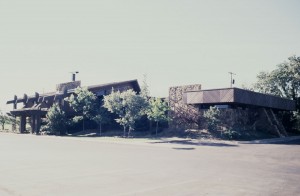 Want to see an interior shot of the expanded dining room — it is SO fantastic: 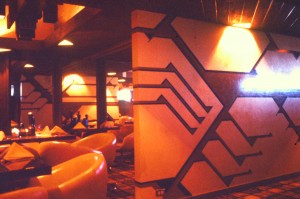 The light boxes!  The wall covering!  The perfect mood lighting!  I’d camp out in one of those super cozy chairs and NEVER leave, I love this space so much.

The Fox & Horn did well over the next few years, even hosting presidential candidate, Edward Kennedy, for a fund raising dinner in 1980.  But the owners sold the eatery the following year and it became a succession of restaurants — Monaghan’s, PJ’s 4 Fresh Fish, and Alexander’s Steakhouse — before finally closing as a restaurant for good in the late ’80s.  Soon after, the building was auctioned and became medical offices, which is what it remained until the May 2013 tornado hit the south side of town.  The building sustained some damage: 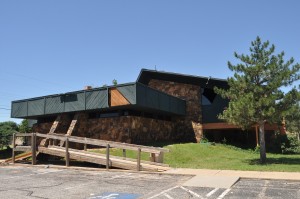 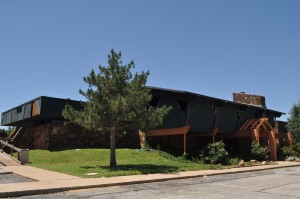 I don’t know if the medical office reopened after the tornado, but I do know that this lovely piece of organic modernism was demolished this summer… 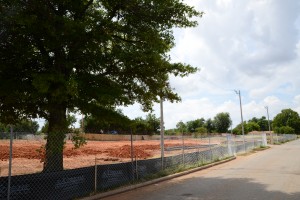 … and this utilitarian and totally lackluster replacement is what you’ll be seeing in the near future: 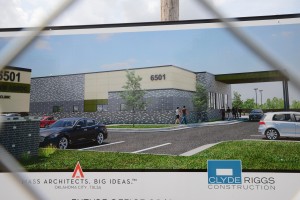 Unfortunately, I had the sad duty of informing Gary that his first professional creation was no more, and he sent these heartfelt words in response:

I supervise everyday and work construction on everything I design. The Fox and Horn was no exception.  Giving birth to an idea, [one much different than the clients envisioned],  developing that idea into reality, with all of the road blocks that pop up along that journey…to finally breaking ground and have to deal with all the negative comments from the workers who have NO IDEA what they are doing…”my grandpa didn’t do it that way”….fighting to keep the integrity of that vision, physically working to assure that reality….only to have it destroyed…OVERWHELMING.  It is as much of a death to me as if it were my child…which it is.

RIP, Fox & Horn.
You Are Cordially Invited to Stay at the deVille Motel In Case You Missed the 2015 AIA Chit Chat
Click here to go back to previous page