From Bauhaus to Jewish Mod to Women in Design: This Summer’s Best MCM Exhibits in NYC

I coordinated my most recent New York City visit to coincide with several mid-century modern design exhibits. None of them disappointed and I thought I’d pass on info (and some photos) in case you happen to be in the area or get a chance to see them at other venues in the future.

My friend and I hit the MoMA exhibit Latin America in Construction: Architecture 1955-1980 on an appropriately steamy Sunday afternoon. This exhibit is massive and will take you several hours to saunter through with videos, sketches, photographs and more models than you can shake a stick at. This cool piece, that looks right at home in the museum, is Gomez Gavazzo’s “development calculator” designed to assist in figuring population density and territorial planning. 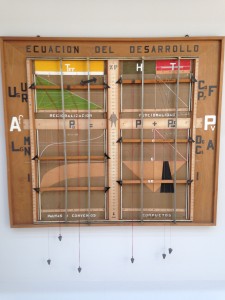 There are plenty of academic reviews of the exhibit online (so I definitely don’t need to give my layman’s two-cents) and I’ve linked to one I found especially interesting from the LA Times.

And, while you’re there, do pop in to see From Bauhaus to Buenos Aires: Grete Stern and Horacio Coppola. Stern’s photo collages are spectacular. 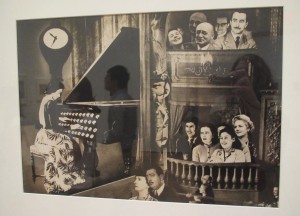 On my third day it was raining cats and dogs so another museum visit made perfect sense. I headed to Battery Park and the Museum of Jewish Heritage. Designing Home: Jews & Midcentury Modernism was modest in size, but had plenty of eye candy. One of my favorite parts was the nearly half hour video of Saul Bass title sequences – brilliant! 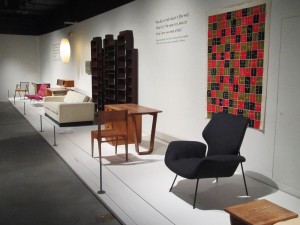 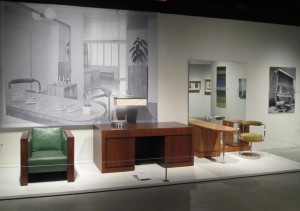 Day four and still raining – oh well, off to the Museum of Arts and Design (MAD) to see Pathmakers: Women in Art, Craft and Design, Midcentury and Today. “In the 1950s and 60s, when the worlds of art and design were dominated by men, women such as Sheila Hicks, Eva Zeisel and Ruth Asawa challenged the status quo with innovative works in textiles, ceramics and metal. The exhibition demonstrates the important contributions of women to modernism in postwar visual culture. Their legacy today is reflected in the work of contemporary artists and designers such as Hella Jongerius, Michelle Grabner and Polly Apfelbaum” (from the visitor guide). Also modest in size, this too had considerable eye candy. 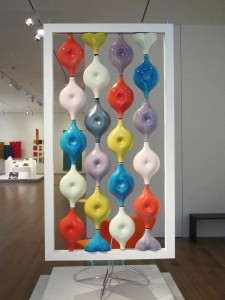 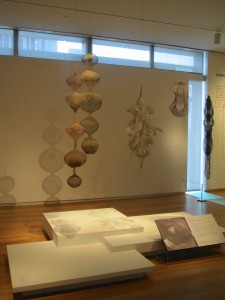 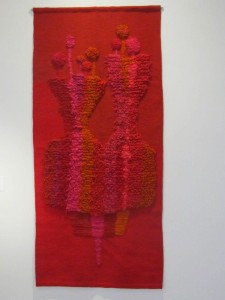 If you weren’t already aware, this museum is now located in the mid-century modern building at 2 Columbus Circle by Edward Durrell Stone. A controversial structure early on, it was placed on the 2004 National Trust for Historic Preservation most endangered list because MAD was going to thoroughly renovate before occupying. Eleven years later, the famous “lollipop” shaped columns at the base are now mere ghosts seen from behind the new façade. Though not a fan of the new exterior (surprise), I had no problem with the rethought interiors. Best of all was the retro styled restaurant, Robert, that had bird’s eye views of both Broadway and Central Park.

I already knew the Bauhaus was important for this design period, but the biggest take away from these exhibits was just how many of these artists and architects that I revere had studied there. Thank you Bauhaus. Oh, you’ll need to hurry to catch the Latin America exhibit as it closes July 19th, otherwise most of these run into September and beyond.

PS Though I didn’t make it out, I heard that the Matthew Wiener’s Mad Men exhibit at the Museum of the Moving Image in Queens was a lot of fun, too.

Oklahoma State Lodges: The Bizarre Story of Arrowhead Henry L. Kamphoefner: His Years at OU and Beyond, Part 1
Click here to go back to previous page