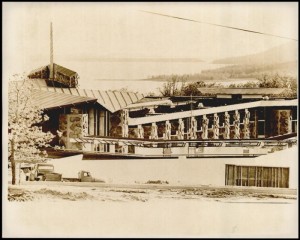 Like Fountainhead, its sister lodge to the north on Lake Eufaula, Arrowhead Lodge was born amid controversy when the State of Oklahoma took out a $9 million federal loan to construct the two resort areas, both of which opened for business in 1965.  While the flashy and ultra swank Fountainhead was geared toward a more affluent clientele, Arrowhead was designed by the same firm (Bailey, Bozalis, Dickinson & Roloff) as a more natural, earthy alternative to all the glitz and glamour upstream. 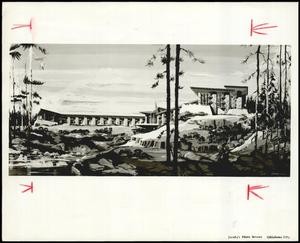 Incorporating native stone and dark wood in its modern, Wrightian design, the Arrowhead Lodge contained 104 double rooms in a ranch-style layout overlooking the lake.  Here’s the main lobby and pool under construction in 1965… 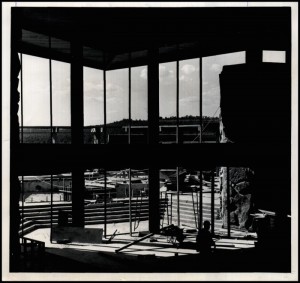 … and the lobby after completion: 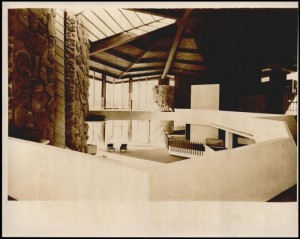 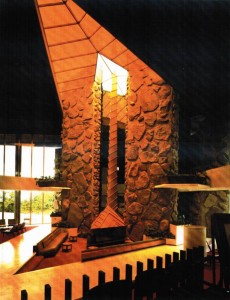 Also, there were 54 cabins scattered around the 1,500 acre site — some looked like this mod beauty: 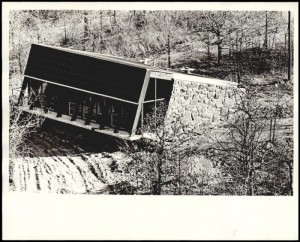 There were also a few two-bedroom, hexagonal treehouses on stilts near the shoreline: 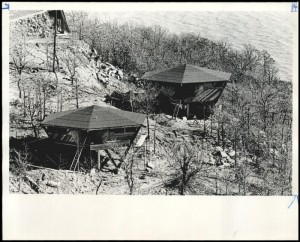 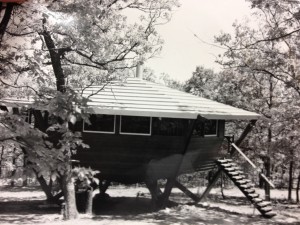 Here’s an interior shot of one of the cabins from the 1970s — love that fireplace! 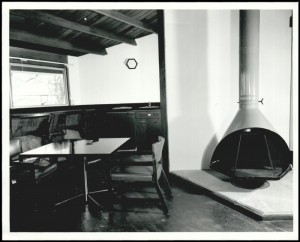 Other lodge amenities included a nine-hole golf course, horse stables, a boat ramp, and a pool.

The new lodge was an immediate success and hosted many a fishing tournament, religious retreat, and family get together through the Vietnam War, Watergate, the Iran hostage crisis, and the first Space Shuttle flights.  Here are photos of the lobby and bar during these years: 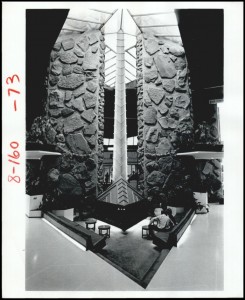 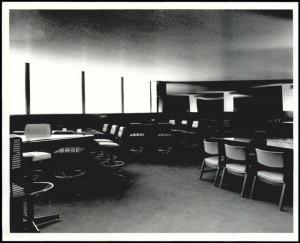 But, even with all of Arrowhead’s success, uncertainty loomed as the state’s unpaid loan continued to accrue interest and penalties.  By 1983, the $9 million loan from nearly 20 years before had swollen to over $15 million, and there was little to do but deed Arrowhead and Fountainhead to the Federal government to forgive the debt. 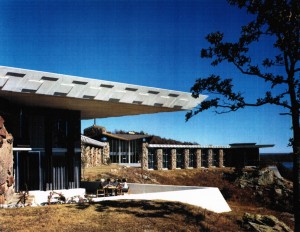 Both lodges were put up for sale, and the Choctaw Nation became the new owners of Arrowhead in 1985 with their bid of $2 million.  The tribe owned and successfully operated the lodge for the next 15 years, even adding gambling to Arrowhead’s vast array of amenities.

The lodge switched hands again in 2000, when a non-profit group with ties to the Church of Scientology bought Arrowhead and converted it into a drug and alcohol treatment facility.  Now called Narconon Arrowhead, the old lodge itself is being very well cared for, as you can see from these images from the Narconon Arrowhead website: 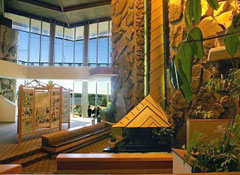 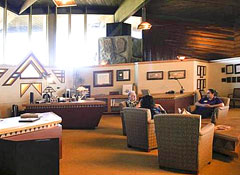 Although the former lodge is fairing well, the rehab’s unusual treatment methods, established by founder L. Ron Hubbard, have made Narconon the center of controversy and concern from the beginning.  According to a 2012 article in the Tampa Bay Times, some of these treatments “include high doses of niacin and lengthy sauna sessions that are said to release stored drug residues from fat tissue — a Hubbard theory contested by many health professionals.”

Three deaths within a couple of years have only added to the growing controversy surrounding Narconon Arrowhead and its methods, with the families’ wrongful death attorney, Gary Richardson, stating, “I couldn’t begin to tell you the stories I’ve heard of what goes on down there.”  In response to the center’s questionable practices, legislation has been passed to require that Narconon Arrowhead and other privately-run rehab centers be regulated by the Oklahoma Department of Mental Health and Abuse Services.   In the meantime, the organically modern Arrowhead Lodge remains in operation as a drug treatment facility, but its days of being remembered as a restful haven to weary travelers may be over forever.

Burlesque: The Art of the Tease From Bauhaus to Jewish Mod to Women in Design: This Summer’s Best MCM Exhibits in NYC
Click here to go back to previous page