Art in Architecture: The Rendering — Part 2

Last February, we profiled some of the great renderings of Oklahoma architecture that we’ve stumbled across over the years.  Well, in the last year, we’ve found another batch of great drawings that you might be interested in, so take a look.

Let’s begin with this stunning rendering that Mike Brown over at RetrOKC found at an estate sale not too long ago —  if you love it as much as I do, Mike has the original for sale in his shop…..

Speaking of airplane hangars, here’s a masterfully composed rendering of a very similarly designed one.  Not sure where this was or if it’s the same one pictured above but with a name change.  What do you think?

Although it’s discolored and faded, I also love this rendering for the shiny, new, and really monstrous Western Electric Plant at Reno and Council: 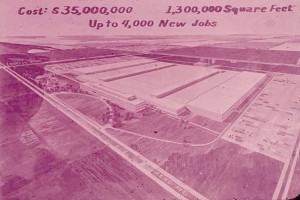 My grandfather was one of the 4,000 or more new jobs at this plant, and I always remember driving by this behemoth as a kid and marveling at the sheer size of the place.  Even under a new company’s ownership, it’s still quite an impressive building. 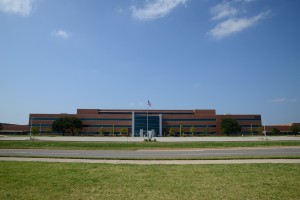 Here’s another faded and discolored shot of a proposed Southwestern Bell branch office somewhere in the state: 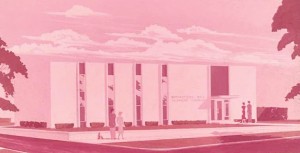 This beauty is from Mike Brown’s collection and shows a rendering of the proposed Shepherd Memorial Baptist Hospital that was to be built at NW 30th and Villa on land donated by the Shepherd family: 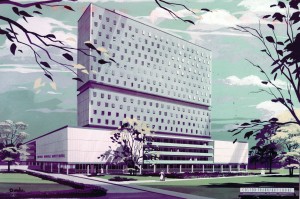 After much study, planners decided that the 10-acre, residentially-locked parcel of land was much too small for their needs and the hospital, designed by Coston, Frankfurt & Short, was eventually built at NW 63rd and Hefner Parkway. 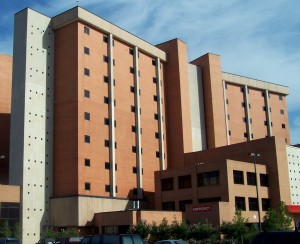 Another hospital rendering that I like, just because it’s so simply done, is the one for Bethany General Hospital: 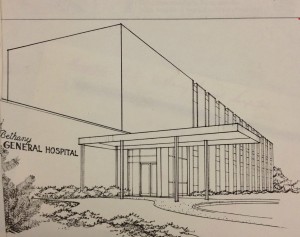 Built in 1968, the hospital was added on to over the years and closed its doors early this year: 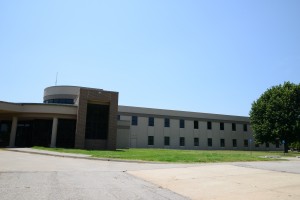 Since we’re on a hospital roll, here’s a pre-cross rendering for the new Mercy Hospital on Memorial Rd., which was completed in 1974: 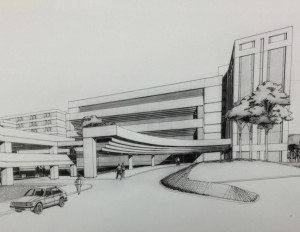 Okay, that’s it for the hospitals.

If you go to the OU School of Architecture library, you’ll be greeted by several mind-blowing student drawings from the Goff years and beyond, including these two stunners that make me wish like hell they had been realized: 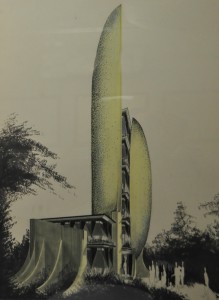 Speaking of what could have been in Norman, I’ve read a lot about Goff’s unrealized Crystal Chapel, but I’ve never seen this rendering from 1958 for the proposed Trinity Chapel designed by Frank Lloyd Wright.  I might go to church more if it were in a place like this: 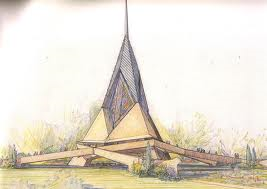 Very similar in style to this is the Norman Byrd-designed religion building for the State Fairgrounds: 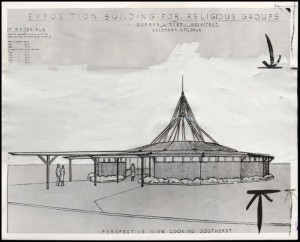 This one doesn’t look at all familiar to me.  Does anyone know if it was ever built?

I’m saving my best find for last, a totally Space Age crazy rendering for the UFO-styled State Capitol Bank designed by Robert Roloff of Bailey, Bozalis, Dickinson & Roloff.  I found this incredible rendering in the Oklahoma Historical Society archives — you’ll definitely want to click on it to see it in all of its marvelous detail:

How scrumptious is that?!

I’ve found several more renderings and models and will be showcasing them soon.  If you’d like to see our first post about architectural renderings go here: