Truett Coston, His House, and a Calf Named Julius

Frank Lloyd Wright once said, “Every great architect is — necessarily — a great poet.”  If any Oklahoma-based architect embodies this description, it would surely be Truett Coston, a true Renaissance man who was also one of our state’s most forward thinking mid-century architects.

Born and raised in Lufkin, Texas, Coston grew up appreciating both the practical and creative aspects of the arts, so much so that when he attended the University of Texas, he received dual degrees in English and Architecture.  During World War II, he worked for the Austin Company designing war plants, which brought him to the Sooner State in 1942.  The still-untamed, wind-swept prairies of Central Oklahoma must have appealed to the young and spirited architect because it didn’t take long for him to decide that this would be the perfect place to set up shop after the war, and that’s just what he did.  In 1945, Coston formed the Oklahoma City-based firm Coston & Frankfurt (later Coston, Frankfurt & Short) and began designing some of the state’s most impressive and award-winning examples of modern architecture, including the remarkable St. Luke’s United Methodist Church: 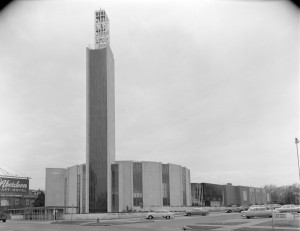 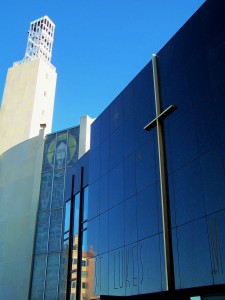 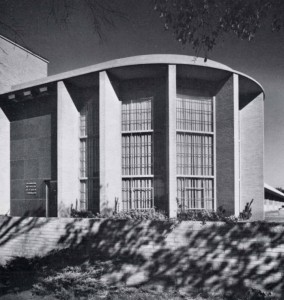 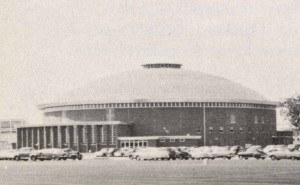 And his own personal residence on 80 acres of rolling, green hills in the farthest reaches of northwest Oklahoma City: 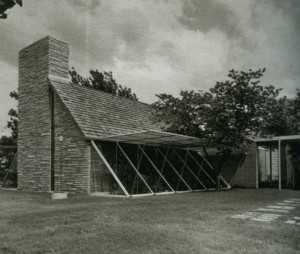 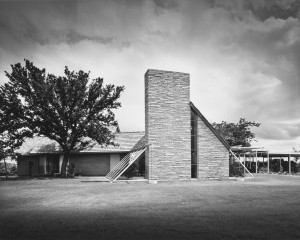 This parcel of terra firma out in the middle of nowhere contained a Land-Run-era, one-room farmhouse on the highest hill, and the rural setting both enchanted and challenged the artistic Coston. Undoubtedly, he saw the vast landscape as a place where he could indulge his creative endeavors, painting and gardening among them, and enjoy the peaceful life of a country gentleman, as seen in this photo of Coston on his beloved tractor in front of the home. 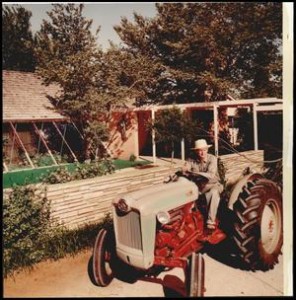 The challenge was what to do with the old farmhouse.  He didn’t want to demolish the small cottage that had called this land home for so long, but being an architect, he also wanted to create a space that reflected his very modern sensibilities.  So what did he do?  Ingeniously, he incorporated the farmhouse, intact, into his design for the new home and harmoniously blended both spaces by replicating the farmhouse’s a-line roof into the design for the modern addition.  The result was a five-bedroom stunner with 8,000 square feet of indoor-outdoor living space overlooking Coston’s expansive acreage.

The tent-shaped living room addition boasted exposed steel beams, a cork ceiling, and a flagstone wall offset by a huge fireplace, while the lower one-third of the pitched roof sported windows on two sides, letting in warm sunlight to make the room feel bright and airy: 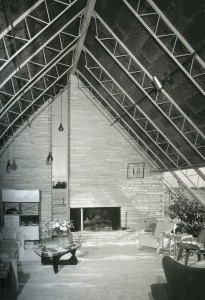 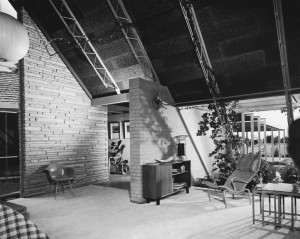 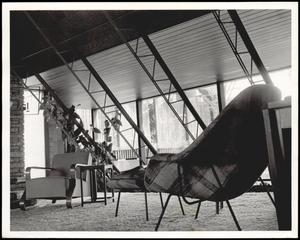 In the eaves of the A-frame living room, Coston, who was an avid gardener, included a space for his beloved tropical plants to bring a little of the outdoors inside.  Here’s the view of his triangular-shaped indoor garden area, complete with a protective awning to protect his garden from strong summer rays: 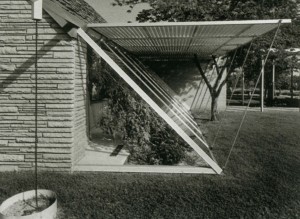 He also designed a large, eat-in kitchen off of the original farmhouse: 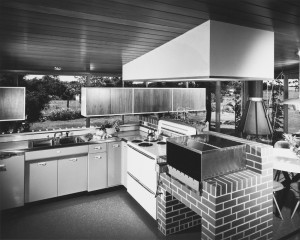 The old home itself was converted into the architect’s personal office and artist’s studio and, even later on, into a formal dining room.  Also, Coston created an outdoor oasis in a central courtyard and even built this gorgeous canopy over a seating area: 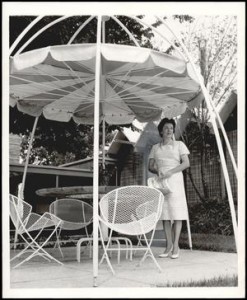 I want every single thing in that gorgeous patio set, don’t you?

This beautiful blend of old and new quickly gained the attention of and admiration from the architectural community, with the home receiving the Best Remodel/Extension award by the Oklahoma AIA in 1954.  Also, that year architectural photographer, Julius Shulman, came a’calling and Coston gladly let his old friend photograph the modern farmhouse on the hill, which was later featured in Architectural Record Houses of 1956…: 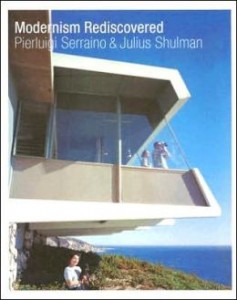 In their many years of working together, Shulman and Coston, who shared a passion for nature and art, became great friends, so much so that whenever Shulman visited Oklahoma on his semi-annual trips, he stayed with the Coston family.  A licensed pilot (yes, Coston also flew — is there anything the man couldn’t do?), the architect even carted his camera-toting buddy around the state in his Beechcraft Bonanza V-Tail on Shulman’s exhaustive photographic safaris.

With his love of animals and nature, it’s no big surprise that Coston wanted to stay close to the land and keep his 80 acres working as a farm, so he had prized cows, horses, chickens, and gardens spread out over his acreage, all of which generated an abundance of healthy food for the family.  Once, when Shulman was staying on the farm, Coston’s young daughter ran, out of breath, into the kitchen where the two men were having breakfast.  She excitedly told Shulman and Coston that one of the cows had just given birth to a healthy calf.  Then, she sat down next to Shulman, who was always her favorite house guest, and told him that she intended to name the little guy Julius in his honor.  This pleased Shulman very much, so much so that he vividly remembered the event over 50 years later on his last visit to Oklahoma in 2008.

Coston and his family lived in their beloved modern farmhouse until 1964, when the architect left Oklahoma and moved to Pennsylvania to work on projects for Bethlehem Steel.  Although he frequently returned to the Sooner State, Coston never lived here again and died at the age of 89 in 1997.  He left behind a great legacy of beautiful architecture, as well as the firm he created (now known as Frankfurt, Short & Bruza), which is still going strong today.

As for the farmhouse Coston created with so much love, a subsequent owner sold off most of the acreage in the ’70s and a bland subdivision has taken the place of the rolling pastures and farmland, but Coston’s home still sits proudly on the hilltop north of town.   I was very lucky to get to tour the Coston house several years ago, soon after the current owners moved into it and long before I had a decent camera to shoot interiors with.  The home’s previous owner made some pretty bad renovations and then let the home fall into a sad state of disrepair, but the new owners were taking great care to restore the original mid-century elements of the home.  Like I said, this was long before I thought of buying a nice camera so these images are pretty crappy, but they give you an idea of how much greatness is still in the Coston house.  For example, the six-decade-old cork ceiling in the living room is still looking great (yes, you’ll have to look past the traditional decor to see it): 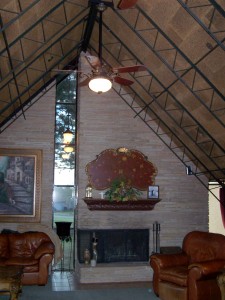 One of the indoor planters in the living room at dusk: 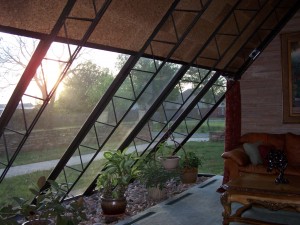 The hallway off of the living room leading to the bedroom wing: 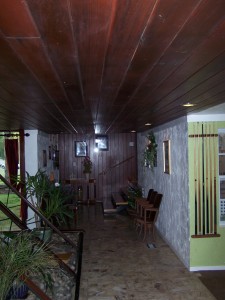 The original farmhouse doors lead to the dining room: 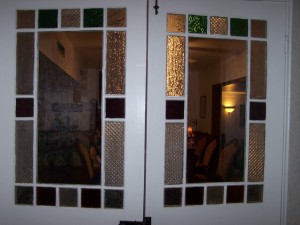 The elegant flagstone chimney and the setting sun: 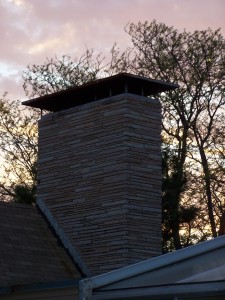 Sunset from the front yard — no wonder Truett Coston loved his house so much: 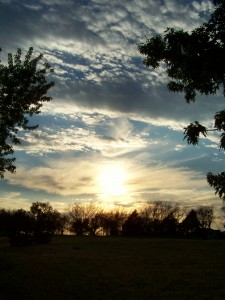 On the Market: A Hilltop Beauty in Wildewood Art in Architecture: The Rendering — Part 2
Click here to go back to previous page