Mid Century in The Chronicles of Oklahoma

It’s always a treat when a copy of The Chronicles of Oklahoma arrives.  The quarterly journal put out by the Oklahoma Historical Society is always packed full of in-depth articles about every aspect of the Sooner State’s history, but this issue was a special treat since it profiled one of the true innovators in post-WWII modern architecture, William Caudill.  Historians Susan Allen Kline and Cynthia Savage’s article, entitled “A Romantic Modernist: William Wayne Caudill and the Work of Caudill Rowlett Scott in Oklahoma,” details the career of Caudill and his firm, Caudill Rowlett Scott (CRS), from lowly beginnings over a grocery store in Austin, Texas, to an internationally acclaimed company with offices all over the world.

Caudill and his partners were instrumental in revolutionizing school design after the war, replacing imposing and unfriendly multi-story school houses with light-filled, low slung counterparts.  The firm put Caudill’s well-thought-out theories into practice with their initial schools in Blackwell — Huston, Washington, Northside, and Parkside.  Here’s the design for the Huston School: 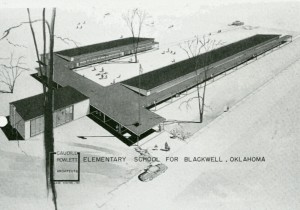 To advertise the schools, CRS hired the one and only Julius Shulman to make the trek to Oklahoma to photograph the schools for national publications.  Shulman was so impressed with what he saw that he returned to Oklahoma many times over the next 30 years to photograph and help publicize all of the innovative architecture he found here.  His images of the Blackwell schools were highlighted in September 9, 1950 issue of Collier’s: 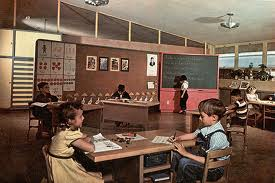 In Oklahoma City, the firm’s best-known creation is the former Bettes Building at NW 15th and Classen: 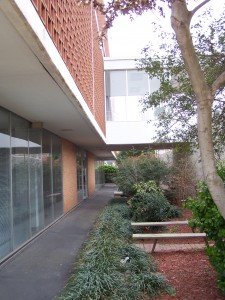 In addition to the article about CRS, Cindy Savage has profiled another brilliant architect, Paul Harris, for The Chronicles of Oklahoma.  The article, “A Modern Response to the Cold War: Paul Harris and the Lawton National Guard Amory,” appears in the Winter 2008-2009 issue.  Here’s the ultra-modern armory and adjacent garage in Lawton if you’ve never seen them: 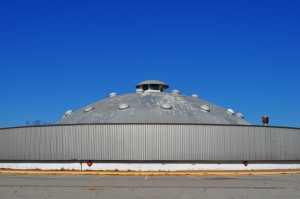 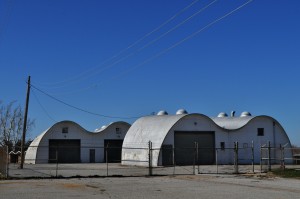 Contrary to the article title, Savage details Harris’s incredible career, from his beginnings in Chickasha to his delightfully modern designs in Lawton that also include the McMahon Auditorium and the Lawtonian Hotel (which is now an elderly living center): 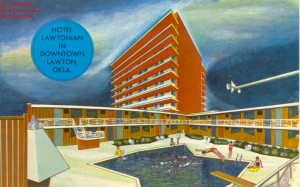 Sadly, Harris’s soaring career was cut way too short by his untimely death in 1958 and not enough people remember the amazing work produced by this great architect.

Another article about mid-century architecture appears in the Winter 1993-1994 issue of Chronicles and profiles the local firm, Sorey Hill Sorey.  Written by Tom Sorey, Jr., the article, “Sorey Hill Sorey: Architects with a Civic Conscience,” highlights two generations of men who designed some of our state’s most distinctive buildings, including the International-style downtown YMCA that was demolished after being damaged in the Oklahoma City bombing in 1995: 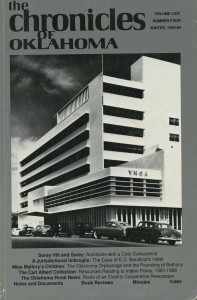 You can read more about the building’s history here on the Mod Blog:

If you’re interested in reading these fascinating articles, you can pick up back issue of Chronicles here:

From Civil Rights to The Who: A Look at Wedgewood Village Amusement Park On the Market: A Time Capsule in Bethany
Click here to go back to previous page