In case you missed our Mod Squad-sponsored tour of the beautiful Troup-Barnes House last weekend, now is your chance to see this mid-century gem!

Here’s what the exterior of the house looked like before the remodel (photos from the County Tax Assessor) — lots o’ pink and pillars: 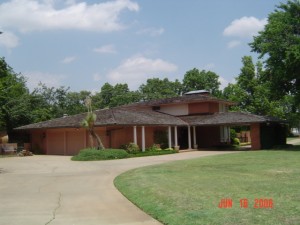 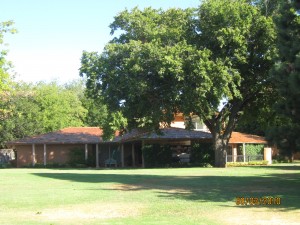 It’s hard to believe that is the same house as this beauty: 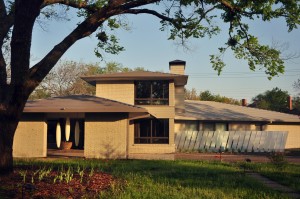 No more pink, no more pillars, and a lot of style that brings out the home’s subtle, modern lines.

This house in the heart of Nichols Hills was designed by Marie Troup, who was one of the first female real estate brokers and contractors in Oklahoma.  While her husband, Woody, ran Woody Troup’s L&M Auto Body Works, Marie’s passion for real estate resulted in her designing and building several commercial and residential buildings beginning in the early ’50s, including the Dream House Motel at SE 45th and Shields in 1953.  Here’s an ad announcing the grand opening: 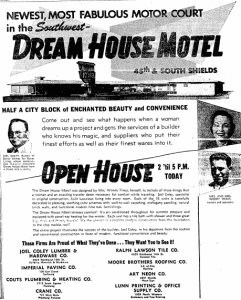 Unlike most of the Metro’s mom and pop motels of the era, the Dream House is still around and, except for this bit of graffiti that was soon removed, looks like it’s in very good shape: 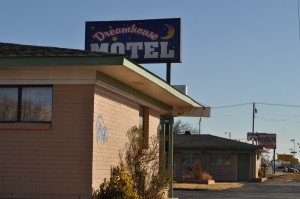 Marie also designed and developed the North Penn Plaza Shopping Center across from Penn Square Mall and sat on the Nichols Hills Planning Commission in the ’80s.  She even ran for Nichols Hills city counsel around the same time to enact laws keeping large lots from being sub-divided but came in second in a race of four.  If you hate driving at a snail’s pace through Nichols Hills, you can blame Marie; she’s the one who came up with the idea of posting those pesky 20 mph signs throughout the entire neighborhood.  Thanks, Marie!

Yes, I know this is supposed to be a post about the tour, but I have to digress just a bit more.  Marie’s brother, Paul Puckett owned and operated Puckett’s Auto Service, which boasts one of my very favorite vintage signs in all of Oklahoma City: 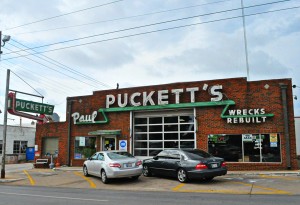 How’s that for a big wow?!  Paul died in 2007, but members of his family continue to run the thriving business on SW 29th.

Okay, my digression is over.  Back to the house.

Ms. Go-Getter Marie designed and built our 4,000 sf tour home in 1950 as her family’s personal residence, and she and Woody lived in the pink house that sits diagonally on the corner for over 50 years until their respective deaths.  You may remember the faux deer that called the front yard home for decades; it seems that every former teenager for the last 50 years has a story to tell about pulling pranks with the beloved deer.   I’m happy to report that Marie and Woody’s daughter took the aged and somewhat bunged up deer with her when she sold the house, so perhaps new generations of teens are pranking them in their new home….

As for the house itself, Cara and Robert Barnes have transformed Marie’s creation from aging and tired to sleek and modern during sometimes frustrating but ultimately very rewarding, two-year-long renovation.  Most of the home’s original, mid-century elements remain, but they’ve been enhanced by very thoughtful updates, as you’ll soon see.  In addition, the owners and their interior designer, Vicki VanStavern, have incorporated bold color to enhance the dramatic furnishings and highlight the Barnes’ impressive collection of modern art.  The result is a fun-filled, homey space that exudes joy and optimism and all things good.

Let’s begin with the first thing that greets you as you walk in the door, a gorgeously entwined tree root sculpture that takes up the entire entry wall: 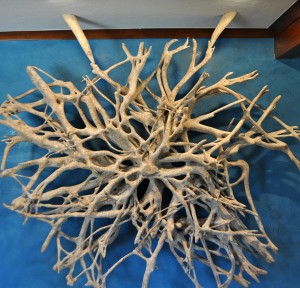 Local sculptor and wood artist, Don Narcomy, dug the intricate root system out of the ground at the Bruce Goff-designed Pollock House in Belle Isle — no easy feat, I’m sure.  Narcomy then treated and worked with the wood to create a one-of-a-kind natural sculpture that is spellbinding to say the least.

Next up is the very blue and happy dining room.  How crazy-fun is that chandelier?  And I love the oval dining table that comfortably seats 10: 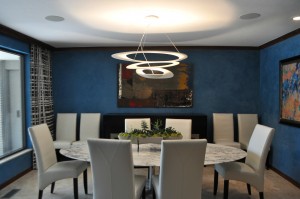 On the table is an amorphic Architectural Pottery planter filled with succulents from one of my favorite shops, Garden Gnome: 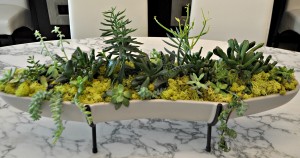 Adjoining the dining room is the formal, art-filled living room, complete with original paneling and fireplace.  Here are two views of this delightful room: 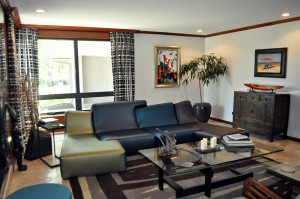 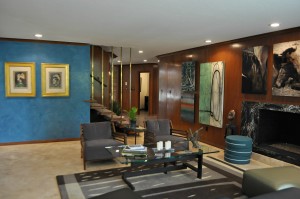 I know you’re eyeing that staircase, which is all original and definitely one of the highlights of the house: 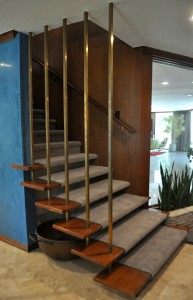 But wait, there’s more.  Check out the built-in planter next to the staircase.  Why-oh-why don’t you see such great details as this beauty in new homes? 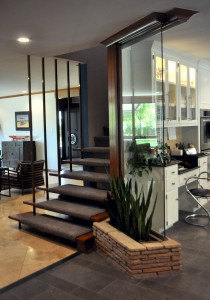 The planter leads into the kitchen and den area.  The kitchen was remodeled during the Marie and Woody’s years in the home, so this space hasn’t been touched much by the new owners: 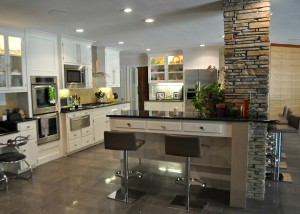 The den, however, is another story entirely: 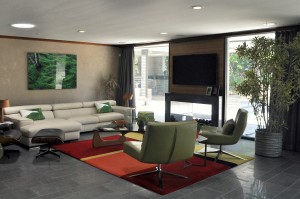 Originally, the entire wall where the fireplace is was nothing but paneling, which made the room quite dark and cave-like.  As you can see, the paneling was removed and replaced with floor-to-ceiling windows and the fireplace is also windowed to bring the outdoors in.  This enhancement really brightens the room, but not enough for Cara and Robert, who also opened up the wall leading to the backyard by replacing the original sliding door with a much larger one.  The result is a space that provides true indoor/outdoor living: 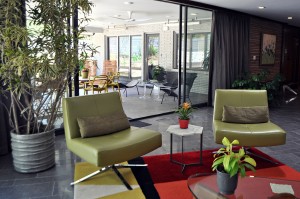 As for the backyard, an ancient pool once dominated the space, but after living with a pool that needed constant attention in their former house, the Barnes decided to fill it in and create a spacious outdoor deck and barbeque area.  Designed by landscape architect Randy Marks, the front and back yards are comfortable, modern, and easily maintained.  Salvaging most of the brickwork and concrete that once existed along the front drive, Marks used it to create a backyard fountain and seating area: 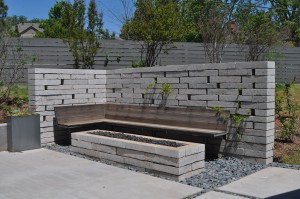 Owner Robert Barnes enjoys a quiet respite on the expansive back patio before the tour begins: 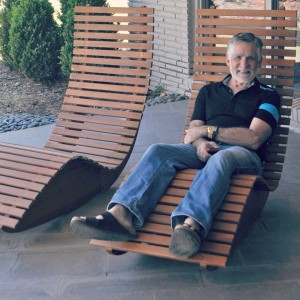 Back inside, there are two bedrooms downstairs.  The master bedroom includes a charming sitting area and original copper-enhanced fireplace overlooking a small courtyard: 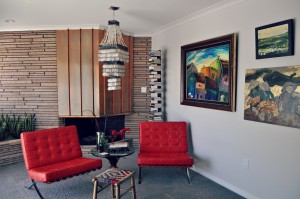 Upstairs is a third bedroom and bathroom: 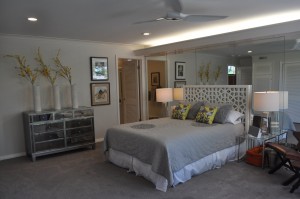 After the tour wrapped, Robyn and Cara chose a few lucky Squadders to receive such raffle items as an Eames Primer signed by Eames Demetrios (thank you, Eames!), a funky-mod hanging candle holder, and a hand-thrown vase: 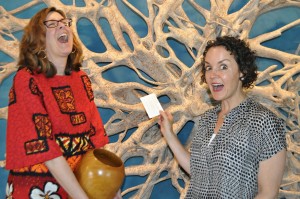 Robyn should be getting in touch with the winners soon.

A huge thanks goes to Cara and Robert for letting the Mod Squad tour your amazing home and to Bo Taylor for providing yummy treats for everyone.

Also, I want to thank local artist, Brent Alexander (Okie Ori on Facebook) for creating this beautiful thank you gift for Robert and Cara.  It’s a hand-cut paper pop-up of the Barnes House — wow! 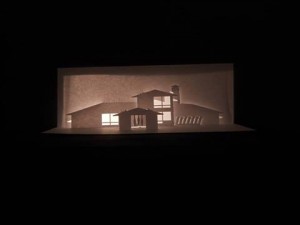 Finally, don’t forget to sign up for our upcoming tour of mid-century architecture in Enid on Saturday, May 24th.  Go to our Facebook evite to join:

On the Market: The Wilson House NW Classen High School Dedication Program
Click here to go back to previous page