text, vintage postcards, and present-day photos by Lynne Rostochil.  Other vintage photos credited within the text.

Let’s pick up where we left off last week by taking a look at more of Oklahoma City’s lost signs. 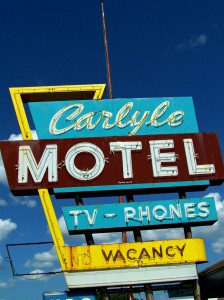 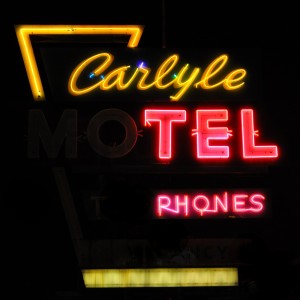 What a sad day it was when the iconic Carlyle Motel sign along old Route 66 came down earlier this year and was replaced with a pathetic piece of blandness that reduces the old motel’s charm considerably.  Such a loss! 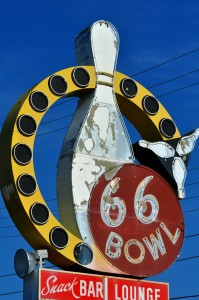 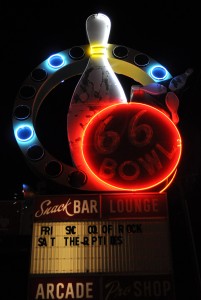 The same can be said for the wondrous 66 Bowl sign a block away that was sold at auction for $3,000 and dismantled in 2010.  Rumors persist that the sign will go into a museum or be installed somewhere along Route 66, but nothing has happened yet. 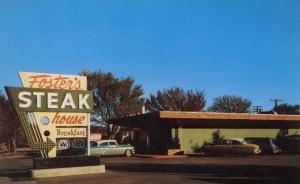 The old Foster’s Steakhouse was located in the same area on Route 66, just next door to the Arcadia Motel.  The building is now home to a medical supply company. 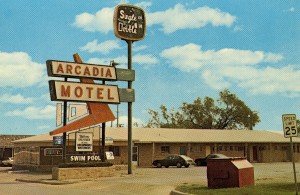 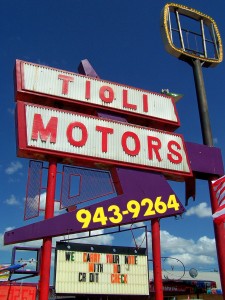 Speaking of the Arcadia Motel, the little Route 66 mom and pop remained in business until the early 2000s when it was sold to a used car dealership and repair shop.  The new owner demolished one side of the motel for the lot but recognized the cool factor of the Googie sign and decided to repurpose it (above).  However, a few years later, the sign had deteriorated so much that the owner dismantled more of it and it’s almost entirely gone now. 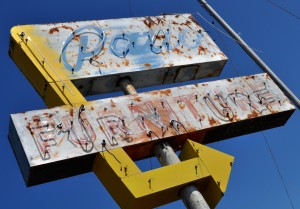 I’ve always loved this one at NW 23rd and Penn and fantasized about stealing it in the middle of the night and taking it home.  Alas, when the cottage-style gas station on the corner came down a few months ago (to be replaced with a Cain’s Fried Chicken), the sign went with it and probably ended up in a dump somewhere.  Bummer. 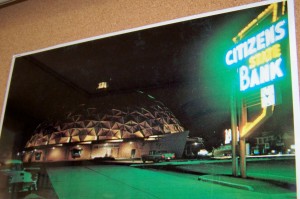 I never knew there was a neon sign at the old Citizens Bank (Gold Dome) until I saw this great photo posted in the lobby back during the Prohibition Room days.  How fun would it be if the new owners, Teemco, decided to replicate this sign as part of the building’s renovation? 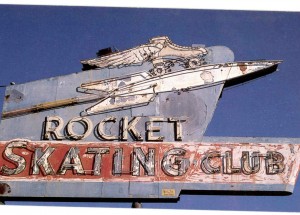 Surely, there was no cooler sign in OKC than this treasure advertising the venerable Rocket Skating Club, a rink near NW 10th ad Penn that served several generations of Metro residents.  Although the sign came down during a storm in the early ’80s, the rink remained for another decade before finally closing and then serving as a storage warehouse.  The entire building burned to the ground a few years ago. 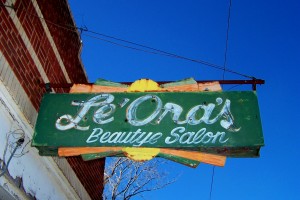 Sadie Leora Hodge opened the salon in this location in 1944, and it soon became a crucial fixture in Deep Deuce.  In fact, Le’Ora’s was such an active community hub that the salon was the area’s polling place in the ’60s, and Ms. Hodge was so important in the area that she was appointed to the Oklahoma Small Business Advisory Council in 1964.  The council was comprised of successful small business owners throughout the city to help other small business owners get started and thrive. Being a woman and African-American, this appointment must have been quite an achievement at the time.

Here’s a rare one of the original (and best) Shepherd Mall sign on NW 23rd and Villa that Mike Brown at RetrOKC let me scan — love, love, love!  If you look closely enough (click the photo to enlarge), you can even glimpse an original Pizza Inn sign on the left: 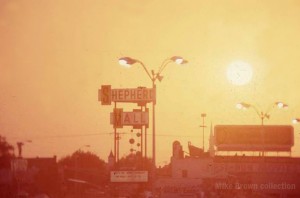 That was the Pizza Inn that was demolished about 10 years ago soon after many patrons got sick after eating there, remember?  Salmonella poisoning, I think.

And here we go with the asides again this week:

One of my very favorite extracurricular activities is getting to volunteer at the Oklahoma History Center whenever my busy schedule permits (which isn’t nearly as often as I’d like, unfortunately).  Since I’m so obsessed with vintage photography, it’s a huge treat to work with other people who share my passion and to delve into so many great photographic collections in the museum’s possession, including the recently-acquired OPUBCO archive.  In fact, it’s like Christmas day every single time I go to the museum and get to dig through old photos looking for images for whatever official reason, and sometimes I actually remember to take my iPhone to snap some of the treasures I find.  The photos-of-photos below are some of the signs I’ve located in the OPUBCO collection — they aren’t the best quality, but they’re good enough to give you an idea of just how many fantastic signs we had here in OKC at one time: 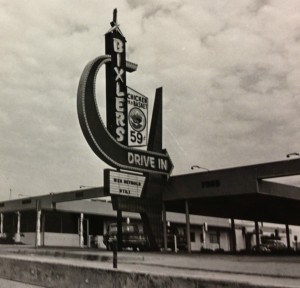 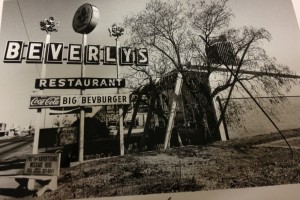 This great Beverly’s sign called the location at NW 23rd and Classen home until the ’90s when it closed.  According to the back of the image, the round part of the sign was removed and relocated to the Beverly’s sign at NW Expressway and Penn (and was subsequently relocated to the current Beverly’s location at NW Expressway and Villa when that restaurant was demolished).  This building, which was designed by Coston, Frankfurt & Short and built in 1956, eventually became Jeff’s Country Kitchen and continued life as a popular neighborhood breakfast spot.   All of that changed in 2001 when Bank One threatened to demolish the Gold Dome across the street and replace it with a Walgreen’s.  After months of protests, media coverage, and searches for a new buyer, the Gold Dome was saved but at the expense of Jeff’s.  The eatery was demolished so that Walgreen’s could get its coveted corner site.  (Jeff’s Country Kitchen moved less than a mile north on Classen into another mid-century building and continues to do a brisk business today, I’m happy to say.) 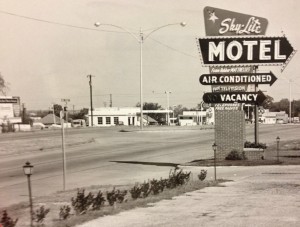 Located on Lincoln Boulevard, the Sky-Lite Motel was one of dozens of mom and pops that lined the street from the ’50s through the ’70s. 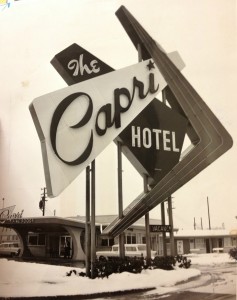 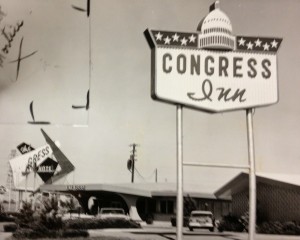 There were a few of these Capri Motels scattered throughout the U.S., all of which advertised with uber-Googie, boomerang signage, but the chain didn’t last long, as you can see in the second photo that was taken as the motel changed to the Congress Inn few years after it was built.  Located at the intersection of what is now I-44 and Broadway Extension, the motel was demolished when the highway was expanded in the ’80s, but one last Capri Motel sign remained in Joplin, MO, until earlier this year when the motel was sold and the sign dismantled.  I believe it was saved, though, so maybe we’ll see its boomeranged goodness again someday.

The following motels were located along a two-block stretch on N. Lincoln: 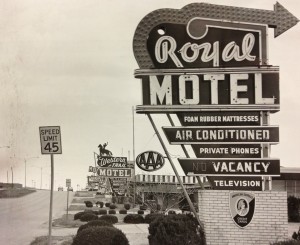 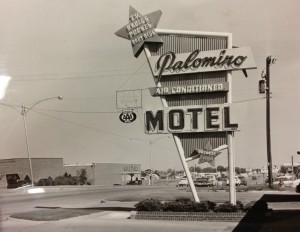 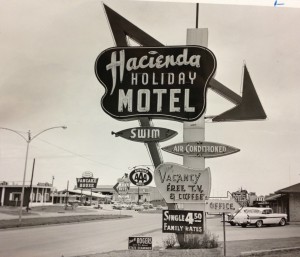 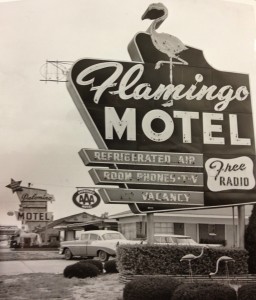 The Oklahoman reported in 1962 of a dispute between the city and owners over the some of OKC’s best signs and their size and proximity to the street.  Recently passed city ordinances meant that dozens of existing signs were in violation of encroachment and would have to be demolished.  However, the signs must have eventually been grandfathered because I don’t think they came down until the motels themselves began being demolished a decade later in panicked response to the growing blight and crime in the area.

Sadly, there isn’t one single motel left along Lincoln now, and as far as I know, the old Western Trail Motel sign is the only one that remains, thanks to John Dunning.  Here’s what the sign looked like in its heyday: 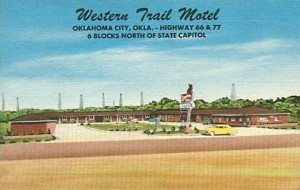 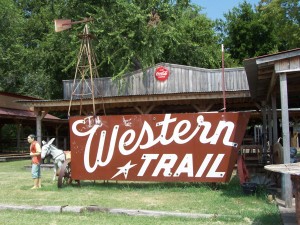 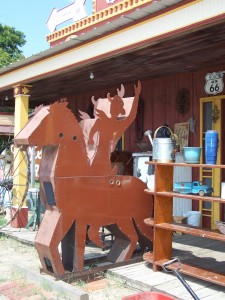 This glorious creation continues to greet tourists and visitors, only now at Dunning’s Western Trail Trading Post at 9100 N. Western. 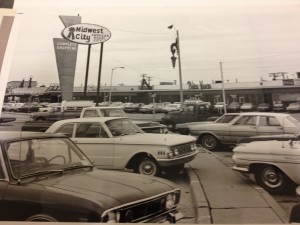 The snazzy Midwest City Shopping Center was in pristine mid-century condition when it was demolished about 10 years ago and replaced with a same-as-it-ever-was Walmart and other box stores. 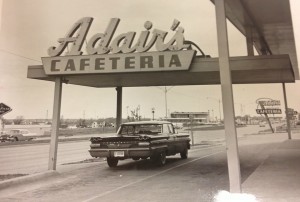 Today’s parting shot is of the old Adair’s Cafeteria Northeast sign on Lincoln.  While the sign and restaurant are long gone, the building is still there, reminding us that life was once quite a bit livelier on this now-quiet stretch of roadway leading from the outskirts to the State Capitol building.

(A big thanks goes to Stacy Frakes at the Oklahoma History Center for letting me use photos from the OPUBCO collection.)

Signs and Asides, Part 1 OU School of Architecture: Style is the Ultimate Morality of the Mind, part 1
Click here to go back to previous page