The following is an article that appeared in the June 1953 issue of Living For Young Homemakers magazine.  This magazine must have really liked coming to Oklahoma!

Midwest City, Oklahoma, is still another young community built from the ground up

For those pessimistic armchair philosophers who moan that the dynamism of America is a thing of the past, the many complete communities which have sprung up in recent years are a resounding rebuttal.  Springfield, Virginia (Community in the Making, August, 1952), Park Forest, Illinois (A City Built and Run by Private Enterprise, November, 1952), and West Hill, New York (West Hill – A Trend, July, 1951) are just a few which have been described in these pages.  Here is still another, Midwest City, Oklahoma, a thriving metropolis of 20,000 which stands where ten years ago there were only wheat fields. 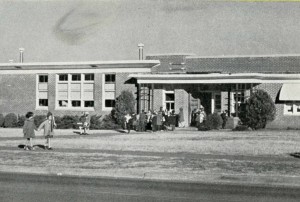 Behind this dramatic metamorphosis are the energy and vision of W.P. “Bill” Atkinson, who heard in 1942 that an army air base was to be located somewhere near Oklahoma City, the exact location, a dark secret.  Shrewdly guessing that the farmer who refused to sell land to him would be the owner of the earmarked army tract, by the process of elimination he located the property and bought 160 acres across the highway.

When Tinker Field was built exactly where he had predicted, he invited fourteen other builders to join him in planning a community to house defense workers attached to the base.  They wisely foresaw that unless the project was started on the basis of a lasting community, it had definite “ghost town” possibilities after the war.  A complete city plan was devised with street layouts which provided a variety of lot shapes and a maximum of safety since curving streets slowed car traffic.

After V-J Day, efforts were redoubled to make Midwest City permanent: the shopping district was expanded; clubs were developed; the enthusiasm of existing home owners was rekindled; a promotional program was launched to attract a new, suburban population who worked in Oklahoma City.  Since 1946 the city has been expanding at the rate of about 500 homes a year, until now there are two square miles fully developed and 1,000 acres adjacent available for future development. 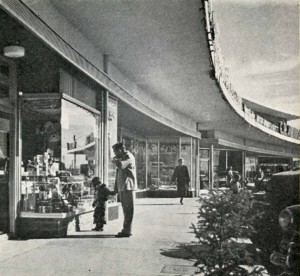 Today, Midwest City is a complete community in every respect but one — it has no slum area, a deficiency much to its credit.  It is operated on the city management system with its own police and fire departments.  The latter includes one station and two trucks; a new station for another truck is being built.  The police department has one patrol car and one motorcycle; the Chief uses his own car to chase speeders.  The jail’s one cell has to this date never been used, the city is happy to report.

For the 6,300 school children, there is one high school, two junior high schools, nine grade schools.  Sixteen busses transport school children to and from, although a town slogan boasts that, “Wherever you live in Midwest City, a child can walk to school and to a grocery store.” 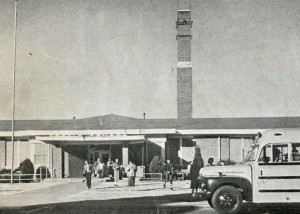 There are thirteen denominations of churches in the city and ground is regularly being broken for new buildings.  In fact, the whole areas continues to be one of bustling activity and builder Atkinson predicts a population of 50,000 by 1960. 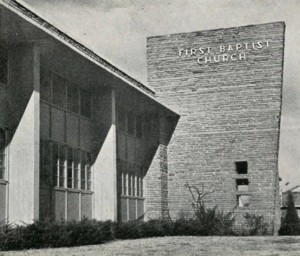 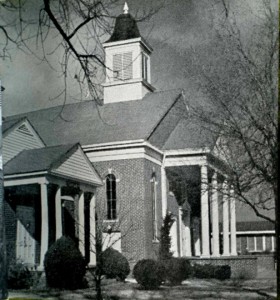 Houses keep pace with growing families’ needs.  Early defense homes had 700-800 square feet; most of the tract’s 3,600 houses have two bedrooms and a garage on a 60-foot lot.  In the early planning stages a strip of high-elevation ground looking down on Oklahoma City was earmarked fora subdivision of larger homes.  Proof that families enjoy life in Midwest City is the fact that a large percentage of homeowners in this new subdivision are families who settled originally in small quarters, moved to larger homes as their needs for space increased. 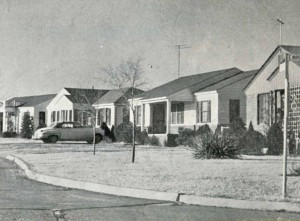 Foresight of city planners was responsible for the survival of Midwest City when its need as a home for defense workers came largely to an end after the war.  It was planned as a self-sufficient community from the outset, now includes twelve schools, thirteen denominations of churches, ample shopping facilities.  Row-upon-row look of homes was avoided by curved streets which allowed variety of lot shapes.  Curves slow car traffic, have made the city safe for children to walk or play anywhere.  Trees were planted so that homes would one day look built among them, rather than vice versa 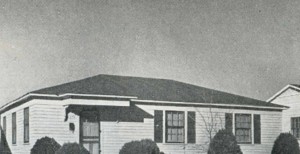 Houses have kept pace with needs of growing families.  Those planned for transient defense workers have been supplemented with larger, permanent quarters which are expansible

For the city’s newest home…:

Eighty thousand miles of travel and studies of houses in 100 cities contributed ideas for the homes in the newest section of Midwest City.  All will be one-story, ranch style, as will all commercial and other buildings in the subdivision.  In contrast to the belief that homeowners haven’t time to take care of large plots, houses are on half-acre lots, the minimum frontage being 76 feet and depth about 200 feet.  Buildings are at least ten feet from the lot line, making a minimum of twenty feet between homes.  This makes room for a driveway to a garage which can be built in the rear should the owners want to turn their present large car storage space into additional living quarters.

Rear view highlights large plots on which homes are built.  Exterior is cedar siding and brick veneer.  It has a hip roof of wood shingles, with ventilating louvers at each end.  Large window walls are part of living and dining areas

Actually, the two-car garage is one of the home’s high points; with over 600 square feet of space, it more than pays for itself in the many activities which it is planned to accommodate.  The model house shown here has the garage set up for games, gardening headquarters, workshop, additional dining quarters, and a barbecue.

Low, ranch homes are the order of the day in Midwest City’s newest subdivision.  Houses range from $12,000 to $60,000, implementing the builder’s belief that if homes are well designed they can be put side by side regardless of cost.  This home is priced at $15,250 for 1,428 square feet of space under one roof, 612 of it in the two-car garage which was designed to accommodate favorite family hobbies.  House is set on a half-acre plot

Builder Atkinson has been a Shetland pony enthusiast since boyhood, has a farm near-by with more than 200, including a champion mare and stud.  Realizing that children can be powerful salesmen, he included a pony, bridle and saddle with the first 100 homes sold. 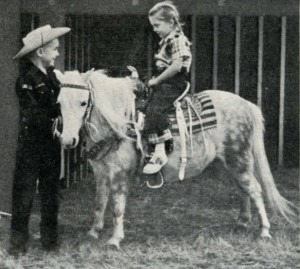 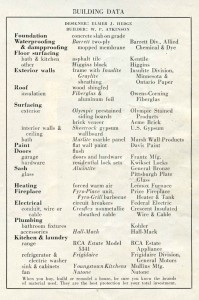 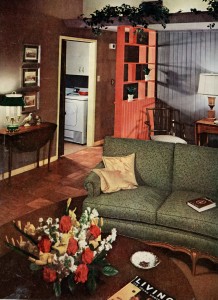 Variety of architectural detail adds interest to the living room.  Cathedral ceiling increases height; painted redwood boards provide a pleasant pattern overhead.  Wall adjacent to the main entry is similarly surfaced.  This portion of the room has been somewhat set apart by creating a lowered ceiling which affords a trough for indirect lighting and a planter box for greenery above.  It is partially supported by a divider which separates living room from bedroom hall and shields view of kitchen.  Room has been decorated in the casual, comfortable way which is popular with most young Oklahomans.  House decorated by Cullimore’s, Oklahoma City 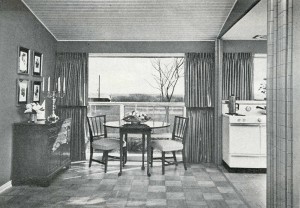 The evening meal is usually a family’s most important get-together and should have an attractive setting.  The large scenic window in the 10’x10′ dining area yields a pleasant view of the spacious back yard.  Kitchen can be closed off by a flexible door; change from hardwood block floor in the living-dining room to asphalt tile in the kitchen is also a token barrier.  Flooring is installed over a concrete slab 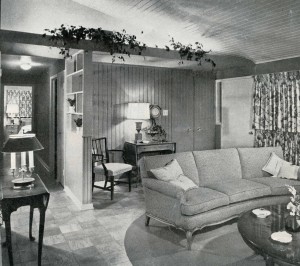 Generously scaled, this 19’x13′ room is ample for the multifold activities of a young family.  To implement an informal living plan, upholstered pieces are commodious and covered in hard-wearing, textured fabrics.  King-size coffee table is the center of the conversation group at the open fireplace (unseen).  Window wall was brightly draped in double tiers which allow whatever degree of privacy is desired.  Hall leads to child’s room off right, master bedroom at far end, study next to it.  Opening onto hall from the left are the bath and kitchen 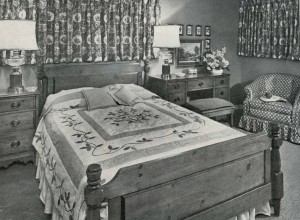 Decoration of bedrooms harks back to the preferences of early forebears.  Big, comfortable pine bed in master bedroom is flanked by commode and dressing table-desk, each with a reproduction oil lamp.  Provincial theme is continued in curtain chintz, a brown background with orange flowers and green leaves.  Walls are dry-wall construction, here painted blue; closet wall (unseen) is redwood boards, painted white.  Floor is brown asphalt tile; rug is beige 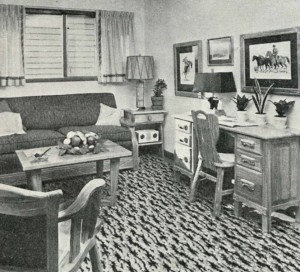 Tucked away in a far corner of the house, the second bedroom has been planned as a retreat for a family member or sleeping quarters for a guest.  Pale yellow walls set off the natural oak finish of furniture and the browns of sofa-bed upholstery and mottled rug 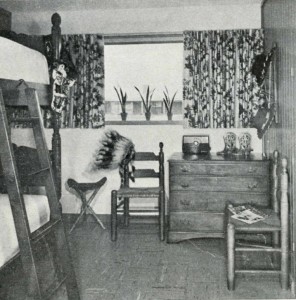 Bunkhouse for boys is colorful and almost scuffleproof.  The beds save space and the bare floors and simple, naturally finished furniture will take hard knocks.  One wall is white, for light effect, the others are sage green.  Tom Sawyer illustrations are used for pattern in the draw curtains 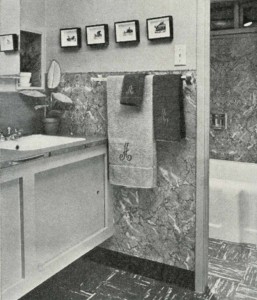 Convenience is the keynote of the bathroom.  Tub and toilet are in the section apart, with its own door; outer area has twin counter lavatories, with capacious storage cabinets below.  Mirror wall above holds extra-long medicine chest 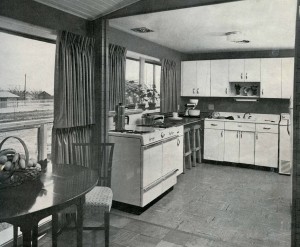 Cheerful open kitchen is an inducement to lighthearted cookery.  The 10’x10′ space accommodates (left to right) a 40-inch range, base cabinet with a drawer and two cupboards, a laminated vinyl-topped work counter which can be a snack bar, double-drainboard sink, washer, nine-cubic-foot refrigerator, and base cabinet (unseen).  Generous wall cabinets speak for themselves 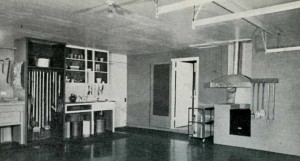 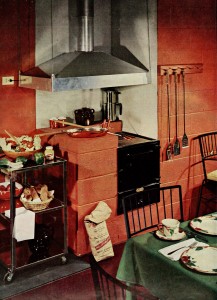 Garages can offer more covered space at lower cost than any other part of a house.  This new model home in Midwest City, Oklahoma, was arranged to show how many family activities can be packed into a garage and still house the family car or cars there.  For informal dining, indoors or semi-outdoors with garage open, the barbecue is conveniently placed, using flue of living-room fireplace 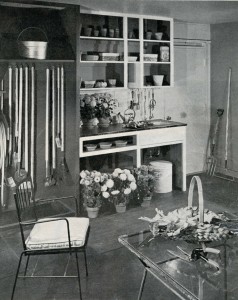 Recreational proclivity of every member of a family gets its share of space in the 612 square-foot garage.  Left to right are tennis equipment, dart game, fishing gear, pony saddle and bridle (first 100 homes included a free Shetland pony), large storage locker, workbench complete with hand tools, garden tool locker and sink with convenient shelves above.  Shuffleboard players can cut a wide swath when car is outside.  Builder Atkinson included this large, ready-built area as living space which a growing family can convert to any number of future uses, according to their own needs

On the Market: A Raymond Carter in Need of Some Love On the Hunt for Mod in Kingfisher and Enid
Click here to go back to previous page