The Discoveries You Make in Old Design Books

One of my many passions is collecting vintage architecture and design books, and one I picked up a few years ago for 10 cents at a garage sale has always been one of my favorites.  The book, New Dimensions in Shopping Centers and Stores by Louis G. Redstone, FAIA, is an early 70’s collection of the best and most innovative store design going on at the time, and it features two Oklahoma City retail spaces, the soon-to-be-built Crossroads Mall in SW OKC and The Discoveries in the northwest part of town. 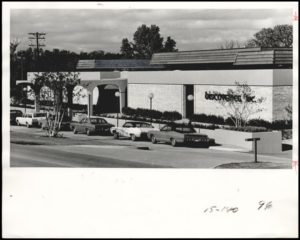 I thought I knew a lot about OKC history, but this one stumped me, so I read what the book had to say about this long-forgotten mall:

This center is located in northwest Oklahoma City, approximately fifteen minutes from downtown, in a middle upper -class residential district.

According to the architects, the owner desired a collection of small specialty shops combined under one roof, where the shopper might come and have lunch or dinner.  The building also offers child care services to encourage longer stays by the mother.  A prime concern was to create a casual, noncommercial atmosphere.  No advertising by any of the tenants is allowed, either within the building or on the exterior.  All shops use identical lettering next to or above their doorways.  For the handicapped and elderly, all areas of the building are accessible by ramps at the front entrance and by an elevator between floors.

The Tea Room on the first floor and the private dining room on the lower level are available for use during evening hours, for wedding receptions, private dinners, etc., without the necessity of any shops being open.  A small card room is available downstairs for bridge parties and luncheons.

All corridors and public areas are used to display paintings and art works.  These are handled by an art dealer and instructor who has her studio within the building.  The dress shop provides modeling during the noon lunch period withing the Tea Room.

Fluorescent lay-in light fixtures were used in some shops which required a high level of illumination.  However, approximately 90 percent of the building, including all corridors and public areas, is lighted with incandescent down lights and spots.  All lighting was laid out to achieve the best possible illumination of the merchandise and no attempt was made to have a consistent overall footcandle level.

The developer-owners are Mr. and Mrs. Robert S. Kerr and C.E. Duffner.

The split-level mini-mall, which opened in 1969, contained over 20 spaces for retail (Her Secrets and the Lemon Drop were just two), offices (Junior League of OKC), and dining (the Kangaroo Restaurant next door to the Kangaroo Toy Shop).  All of these were anchored on the Garden Terrace level by the aforementioned tea shop, Alberta’s: 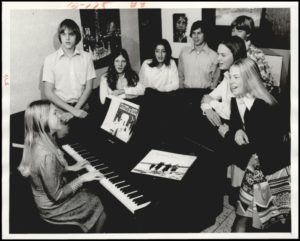 The decor at fashionable Alberta’s, featured “gracefully curved rattan furnishings in an appropriately named ‘Vanilla’ finish for the dining room.  This shade will blend in with the carpeting which combines a soft Cocoa Brown and Cafe a Lait, flecked with black (or should I say Pepper?),” according to Madge Kennedy, the shopper about town and contributor to the Oklahoman back in the 60’s and early 70’s.

As for the rest of the mall, the lower level Promenade contained the card room, a toy store, and other small shops.  It was also the hang out of many a junior league wife: 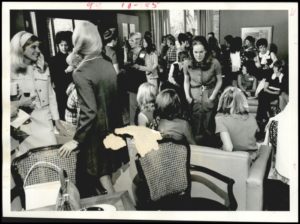 The brain child of LaMoyne Kerr (wife of Robert S. Kerr, Jr.), The Discoveries was a perfect place for upscale (and bored?) Nichols Hills-area ladies to meet up, do a little specialty shopping, and enjoy a cup of tea and modeling show before their children and husbands returned home at the end of the day.  The idea was a good one … and may have worked if The Discoveries had opened a decade earlier.  But, this was the dawn of the 70’s and more women were going to work and no longer had time for long, leisurely lunches and endless cups of tea.

While that was certainly a main factor, I have to think that the lack of advertising on the building must have contributed in more than a small way to the mall’s demise.  I mean, it’s a noble idea to have a “noncommercial atmosphere,” but I imagine that a lot of people drove by The Discoveries at 6100 N.W. Grand every day and never even realized that the place was a mall.  A little advertising might have been a good idea.

So, by the time New Dimensions in Shopping Centers and Stores came out in 1973, the 32,000 sf mall had closed … a beautiful but dismal failure.  The Discoveries’ fixtures and antiques were sold at auction the following year: 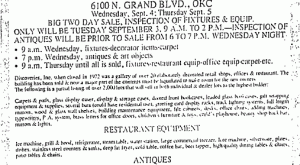 Here’s the barely four-year-old building at the time the mall closed:

The building was sold in 1974 to the Reserve National Insurance Company and converted into their headquarters, but, miraculously, Alberta’s remained an anchor tenant until the insurance company refused to renew her lease and gobbled up the former tea room space in 1980.  Ten months later, Alberta’s reopened in a large space at the French Market Mall, where it remained for the next decade. 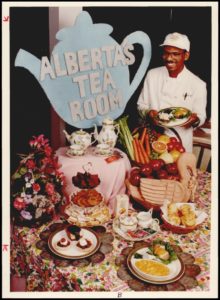 As for the old Discoveries building, Chesapeake bought it from Reserve National in 2006, and the insurance company moved out three years later.  The building came down during Chesapeake’s mega expansion, and it has since been replaced with another kind of mall, the second phase of Classen Curve and Whole Foods: 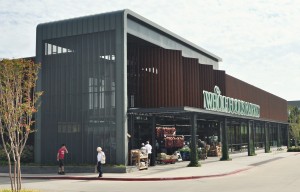 Where The Discoveries failed over four decades ago, the new, two-phased retail space (with another food-related anchor tenant) is a great success and has, like its predecessor, received national attention for its innovative design (by Elliott + Associates).  Phase 1 was featured in the October 2012 Architectural Record: 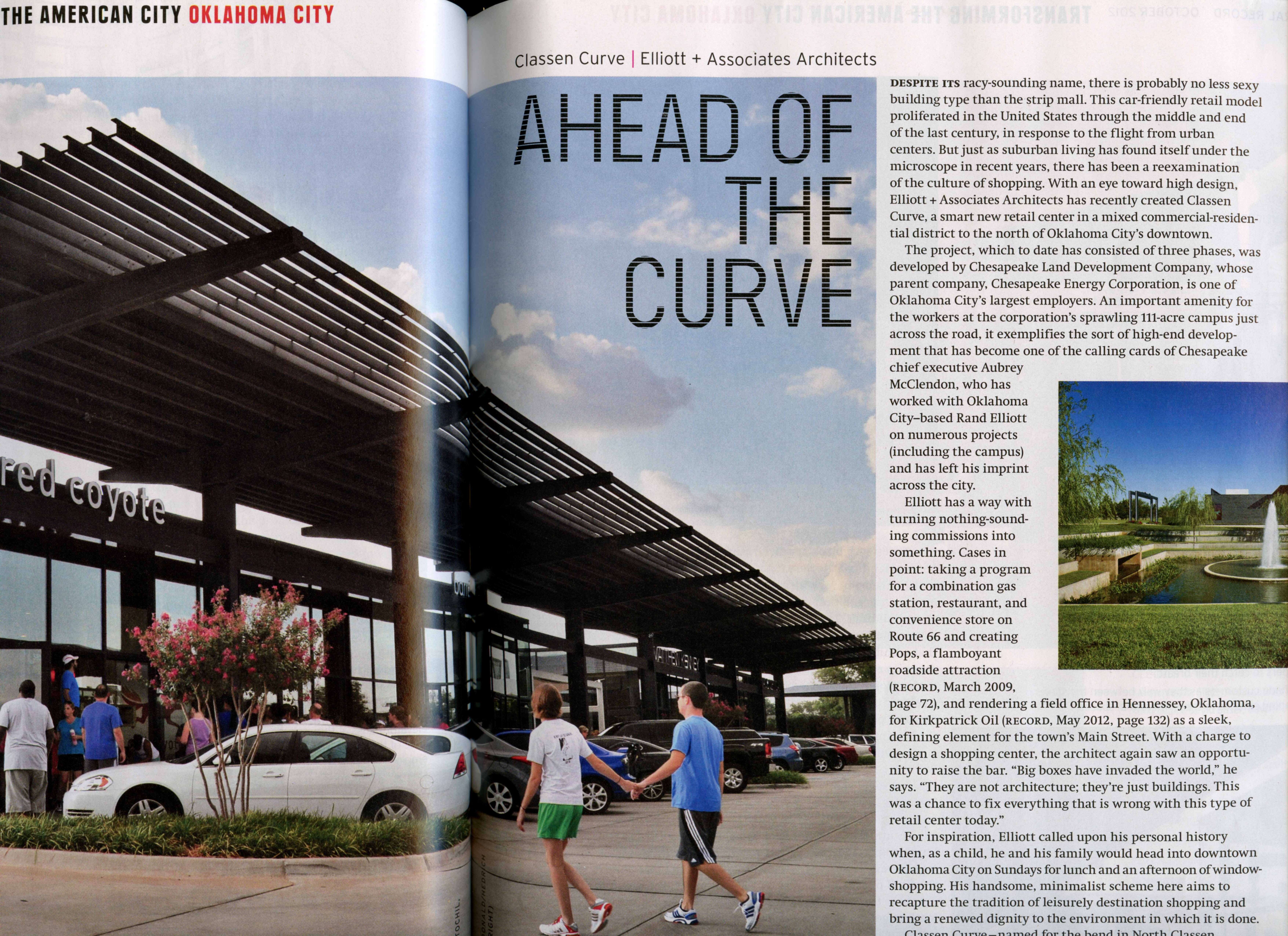 Windsor Hills Time Capsule On the Market: A Raymond Carter in Need of Some Love
Click here to go back to previous page