With such regal names as Tudor Road and Astoria Boulevard, you would think that the Windsor Hills addition in NW OKC would be overflowing with ivy-covered, English-style cottages, but this 60’s-era neighborhood that is bordered by NW 36th to the north, Meridian to the east, NW 23rd to the south, and Ann Arbor to the west, is packed full of delightful ranch houses, a few of which look like something that you’d see in Southern California and not suburban Oklahoma City.

One such gem, built in 1963, rests on a tree-covered, corner lot that looks very well maintained and rather modest from the outside: 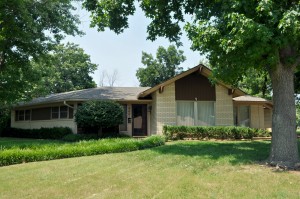 For those of you who visited the 1,800 sf home on NW 32nd during an estate sale there a few weeks ago, however, you know that inside is a mid-century time capsule containing some pretty mind-blowing interior design.  Let’s start in the fabulous, Asian-influenced front entry: 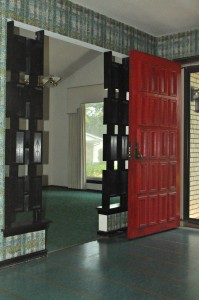 The blood-red front door opens to this, a heaven of aqua!  Yes, that is original aqua carpet, linoleum tile floor (complete with gold sparkles!), and patchwork wallpaper (close up here): 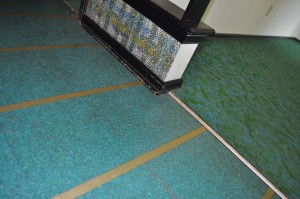 The aqua goodness doesn’t stop there … oh no.  On the other side of the entry is a curved, buff brick wall that houses this great tiered light fixture, which hangs over a built-in, almond-shaped planter: 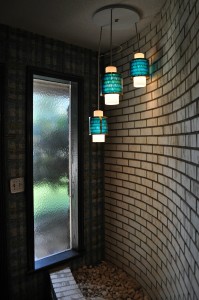 And, this bit of modern mood lighting hovers from the ceiling above: 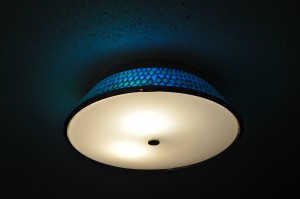 But wait, there’s more.  From this glorious entry, let’s follow the aqua carpet into into the black wood-paneled den that hasn’t been updated a bit in the last 50 years … and doesn’t look like it needs to be touched for the next 50: 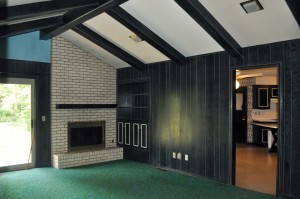 Don Draper definitely would feel at home sipping (or guzzling in his case) a chilled martini in this space!

Beyond the swank den is the kitchen, and if you aren’t already, you’d better sit down for this one: 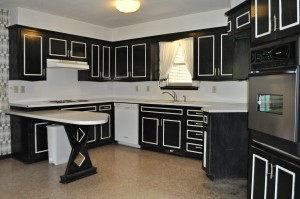 The black stained wood continues here, creating a very dramatic-but-friendly space — and look at that great cut-out at the base of the breakfast bar.  I love little details like this, don’t you?  But, here’s the best part of the kitchen, in my opinion: 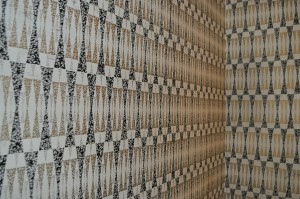 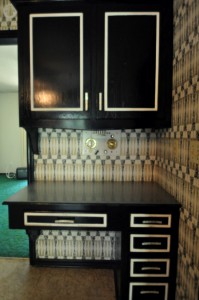 And, as if that weren’t enough, the entire house is wired with Talk-a-Radio radios/intercoms.  You have to love anything named Talk-a-Radio, you just have to.  (Oh, and if you’re wondering about the room to the left, that’s the formal dining room with yet more aqua carpet.)

Here’s a close-up of the pulls in the kitchen: 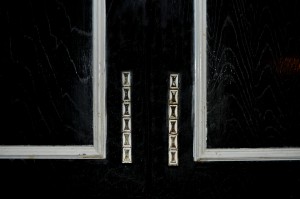 A door from the kitchen leads to a large backyard with something I’ve always wanted — a built-in grill: 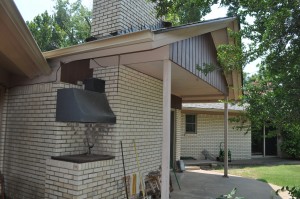 Back inside, the guest bath in the hall boasts a sunken tub and a fantastic, pebble-laden counter top: 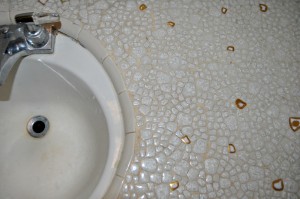 Past two small bedrooms (with unusually large closets) is the master bedroom, which also contains some crazy, original wallpaper.  I can’t decide if it looks like clusters of magnified, swimming sperm or clumps of white dog hair, but I’d sure like to spend a lot of time in this space trying to figure it out.  What do you think: 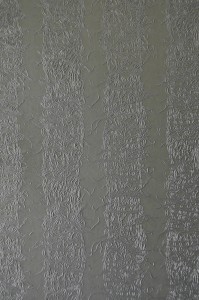 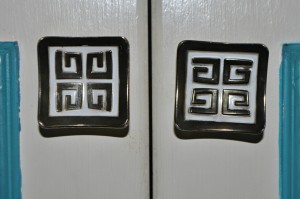 From the master bedroom, it’s back down the hallway toward the entry and the formal living room beyond.  Look at those great ball lights! 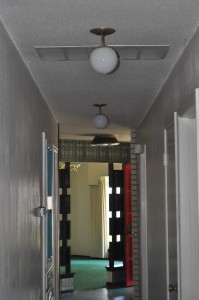 As for the formal living room, it is bordered on two sides (one to the formal dining room and one to the entry) with these incredible black screens: 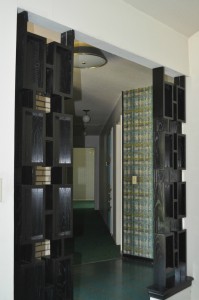 So, if you’re in the market for a time capsule, this might be the home for you.  It will be going on the market soon, so stay tuned to the Okie Mod Squad page on Facebook for more details.

(A big thanks goes to Adrian Mix for letting me take photos of her grandmother’s stunning home.  Although no one in her family can take the house, she’s hoping that the buyer will love all of the original details as much as her family does and will try to preserve as many of them as possible.  I hope so, too.)

Mid-Century at the Movies: Film Noir Mod The Discoveries You Make in Old Design Books
Click here to go back to previous page