Performance, Not Size, Makes for Livability 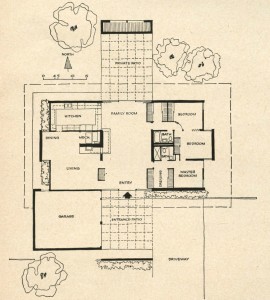 The following is an article from the September 1956 issue of Living for Young Homemakers magazine, which sponsored a poor man’s Case Study House program for several years in the 50’s called the Electri-Living Program.  Each year, the magazine selected 12 architects from around the nation to design an innovative home for a modest $18,000 (excluding the cost of the land) that had to meet the following criteria:

Upon completion of the 12 projects, the magazine featured each home and its amenities in its pages.  As far as I can tell, Oklahoma City was represented three times during the life of the competition, all with designs by local architect R. Duane Conner.  The first home he designed for the program in 1956 was also on the Parade of Homes tour that year, and the editor of Living For Young Homemakers, Edith Brazwell Evans, was on hand the opening day to impart this sage bit of wisdom in a Daily Oklahoman interview: The divorce rate would be cut in half if “homes made women look better.”

Did she really say that?

Yes, yes, she really did, although I’ve had to read the quote three times through to confirm that my brain really processed those words correctly, but I continue to find myself shaking my head in shocked disbelief.  And that’s not all she said.  Evans went on to claim that, through thoughtful lighting and a flattering color scheme, Conner’s Electri-Living house made women “look like dolls” in the kitchen because “everybody’s skin took on a nice glow.”

Okay, the rest of her interview is just as nutty as this so I just have to include it, even though this post is supposed to be one about architecture.  It’s just too morbidly funny not to:

“When Joe comes home from work looking real tired and maybe you are just as tired — but you look well in the light — that’s worth a million dollars to any woman.”  Makes the man want to stay at home, she explained.

“I don’t think women realize how much power they have.  They are the highest paid labor in the world,” the editor continued, pointing out that women have control over the backdrop against which they play the role of housewife.

“The sooner women start thinking about how they look in their house, the happier they will be,” Mrs. Evans continued.  “Homemaking is a hard job.  The setting should be one that helps the woman’s disposition.”

Mrs. Evans insists a woman shouldn’t rely on instincts alone to guide her tastes in creating a home.  She should prepare herself for that career.

“We prepare for everything in the world, but it’s a tragedy women are not trained to make the perfect wife,” she asserted.

Yes, this absurdity really came out of someone’s mouth and a woman’s mouth at that.  (My head is still shaking but in disgust this time, and I’m feeling pretty sorry for all of the women of that generation who bought this line of perfect wife BS — my mom included.)

Anyway, while it’s very tempting, I’m not here to rant about the 50’s female condition, so let’s get back to the story of the Electri-Living house.  I was able to tour the home a couple of years ago and posted some photos on Flickr at that time, so if these images seem like deja vu to some of you, that’s why.  The home is for sale as we speak, so I thought it would be a good time to post the article, vintage photos, and the snapshots I took a couple of years ago.  I’m putting all of the “now” photos with their vintage counterparts so that you can compare the two. Enjoy!

From the September 1956 issue of Living For Young Homemakers:

The average layman’s glossary of houses with reference to type or style would scarcely be descriptive of the Electri-Living home in Oklahoma City.  The architectural vocabulary of this house is inventiveness. Every element has been investigated to determine its function and how that function could be improved upon or heightened for better value in cost, comfort, convenience, and performance.  Thus, a design pattern little less than spectacular has been evolved by re-engineering an age-old rafter-joist roof system to gain from the same materials (1) more effective, insulating air space, (2) more room for storage and the housing of mechanical elements, and (3) the additional aesthetic value of the distribution of reflected natural and artificial lighting.   Dominating the immediate impression, the imposing roof structure has been engineered as a cantilevered shelter that hovers over the interior areas to form a protective canopy for the continuous glass strip above the nonbearing masonry walls. No wonder this house cannot be categorized by any of the familiar terms or times: it is, by concept, not only an articulate expression of mid-twentieth-century shelter but an encouraging step towards the future. Witness to the fact: some ten thousand visitors on the opening day, who were concerned neither with the intricacies of engineering, the mystery of light nor the arts of architecture, said simply — by how expressively — “this is a good house.” 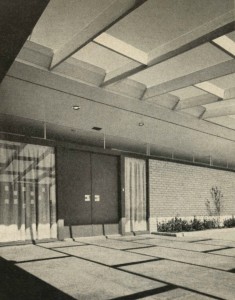 Recognition of the requirements of modern transportation and living habits is emphasized at entrance by a pedestrian-motor court, screen from street by a pierced masonry wall. 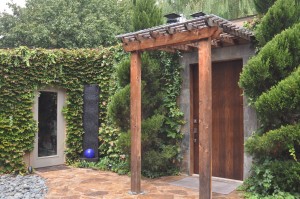 Front view of house (then and now).

Even with neighboring homes close by, the house protects and shields in a way normally attributed to land-abounding estates. Such seclusion and privacy are accomplished by plan, rather than by extending property lines (an important consideration with today’s high land costs). Both natural and artificial lighting are similarly engineered in their direction of source for general illumination. Exterior lighitng is planned in advance of plant growth so that shrubs will conform to a pattern along masonry walls. Recessed fixtures in the overhang are placed over window or door exposures to provide night light from the outside, thus obliterating the black-hold-look windows have without drawn draperies. Roof is supported by masonry blocks at each end of the house (one forms a bedroom wall, the other a wall of the dining area) and by two bearing partitions on the interior which are the walls for the double fireplace and the two bathrooms. 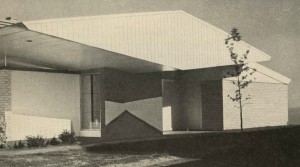 Side view of house. 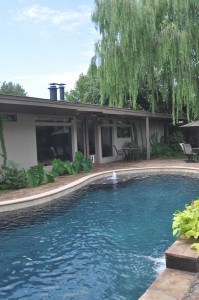 Back of house (then and now).

Insuring a plan that will endure family growth and change, the house is divided into three areas, almost equal in size, that blend effectively one into the other. Interflow of space and light is unencumbered by walls; free-standing storage partitions and furniture arrangement define activities explicitly. Family room is the dividing center section and extends through the house from the front entrance to the private patio at rear. 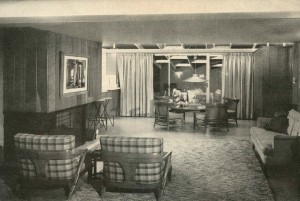 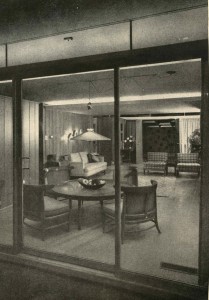 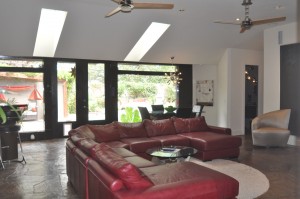 The family/dining room (then and now).

The more formal living room (which was later converted into a master suite) is screened from entry and family room by a storage cabinet and the chimney wall that provides a fireplace for both rooms.  Because the furniture has an important role in defining areas, the decorator has been meticulous in selecting pieces hat are attractive from all angles and whose scale is in excellent proportion to the rooms.  For a decorative vista, an architectural wallpaper is used on two walls ending at the dining area, which opens onto the service counters of the adjoining kitchen. 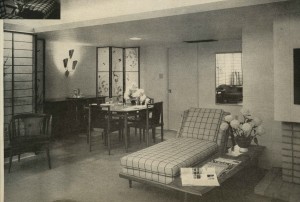 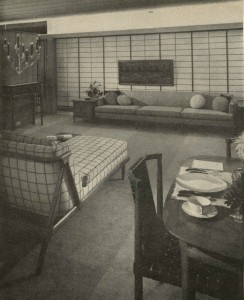 And, that’s it for the tour!  At some point in the 70’s or 80’s, the house underwent a major and pretty bad remodel in which most of the original design elements were lost and the home received a very blecky (yes, I’m saying that’s a word, even if spell check doesn’t agree) blue-gray exterior paint job.  It was more nicely remodeled again about 10 years ago, when a lovely front courtyard was added.

As for Mrs. Evans, here’s a photo of her from the time she was the editor of Living For Young Homemakers: 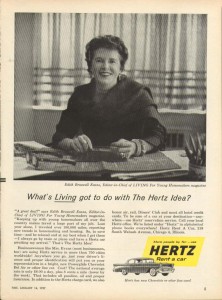 Obviously not content to sit at home looking “like a doll” in the perfect light awaiting her husband’s return from work, Mrs. Evans travelled all over the country in her Hertz rental, worked in New York City as an writer and editor, and generally ignored her own advice to women as far as I can tell.  She was probably a lot happier for it, too.

UPDATE 3/25/15: This home was also featured in the 1956 Parade of Homes Plans book and includes images of the model.  Go here to see more photos of the Electri-Living house.

Mid-Century OKC and Thereabouts, The Grand Finale Mid-Century at the Movies: Film Noir Mod
Click here to go back to previous page