Today, we wrap up our series showcasing Mike Brown’s uber cool collection of vintage negatives that he picked up at a local estate sale awhile back.

Let’s begin with a rare color shot of the newly-built Norman High School (designed by Caudill, Rowlett & Scott and completed in 1957).  The innovative building was named “America’s Best Secondary School” by School Executive magazine and was also featured on the cover of Architectural Record soon after it was built.  Here’s how our mystery photographer saw the school: 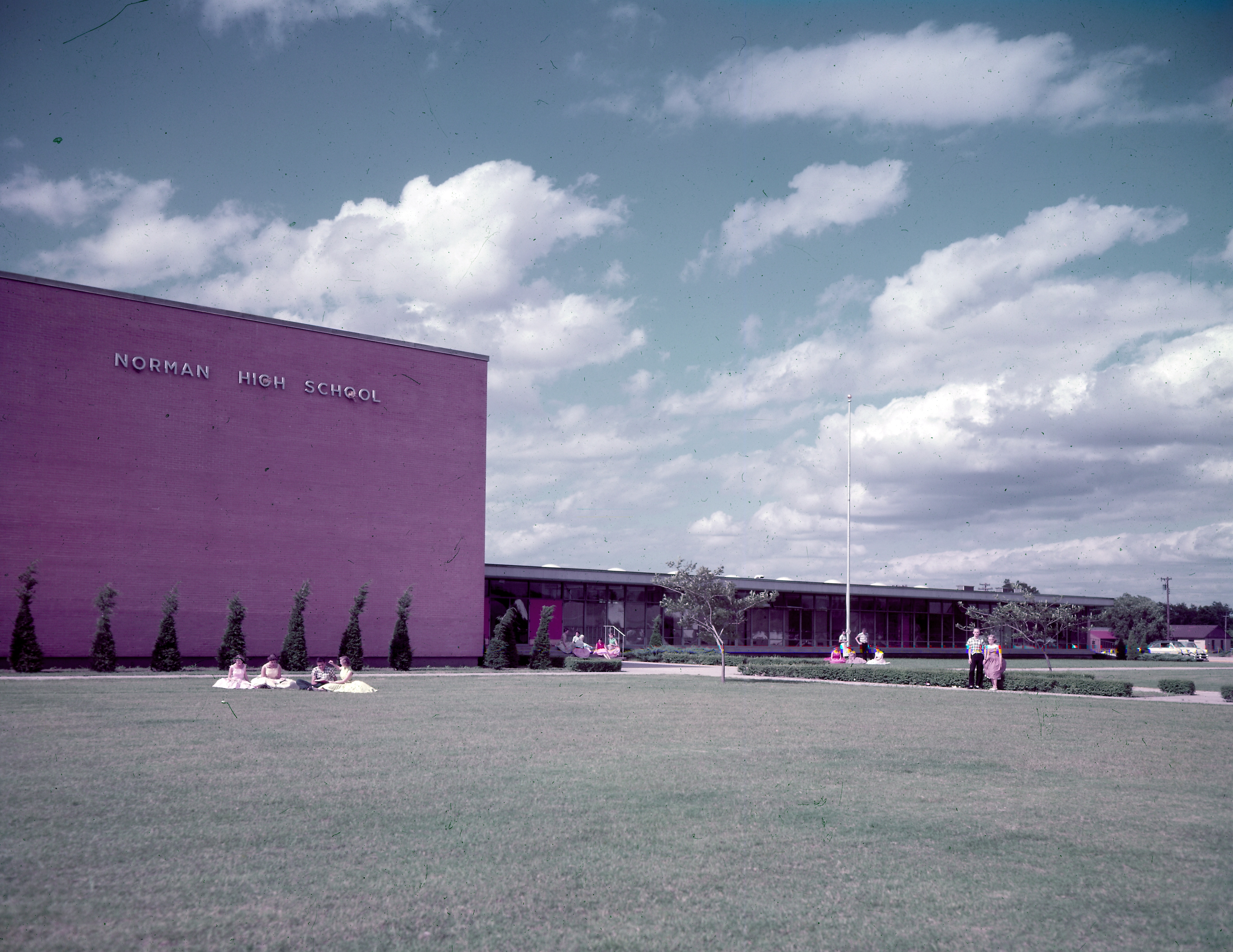 Although modest in size, St. Andrew’s Methodist Church at NE 50th and N. Everest had quite an impressive facade: 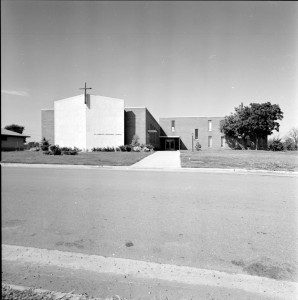 Over the years, the church has expanded greatly and this wing is now almost completely obscured by trees, but it’s still there and looking pretty original.

Several of Mike’s negatives feature various branches of the North Side Cleaners, including their primary location in the Paseo district: 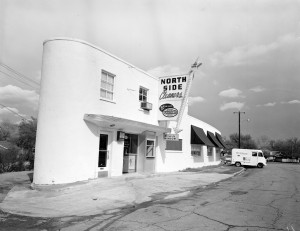 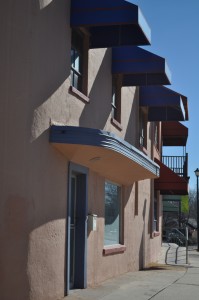 This one was located at the Puddin’ Lanes Shopping Center on W. Britton Road (next to Johnnie’s): 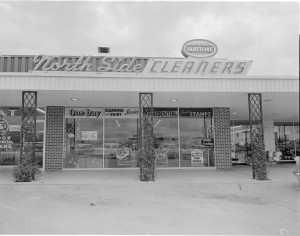 And, here’s one taken at the location at the Portland Shops center at NW 16th and Portland.  Then: 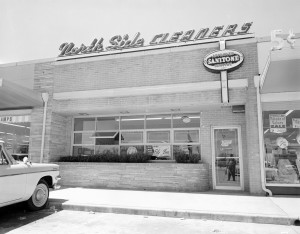 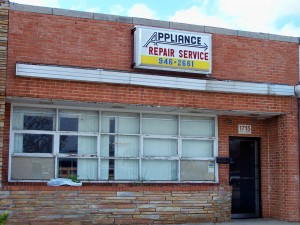 This one was located at 7312 N. Western in Nichols Hills: 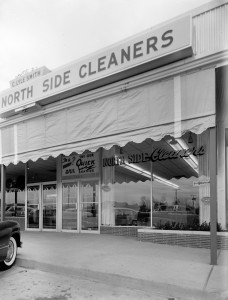 … and I’m not sure where this one was (either NW 16th, on Brookline, or on N. Kelley — all three of these locations have been demolished).  That sign is great, though: 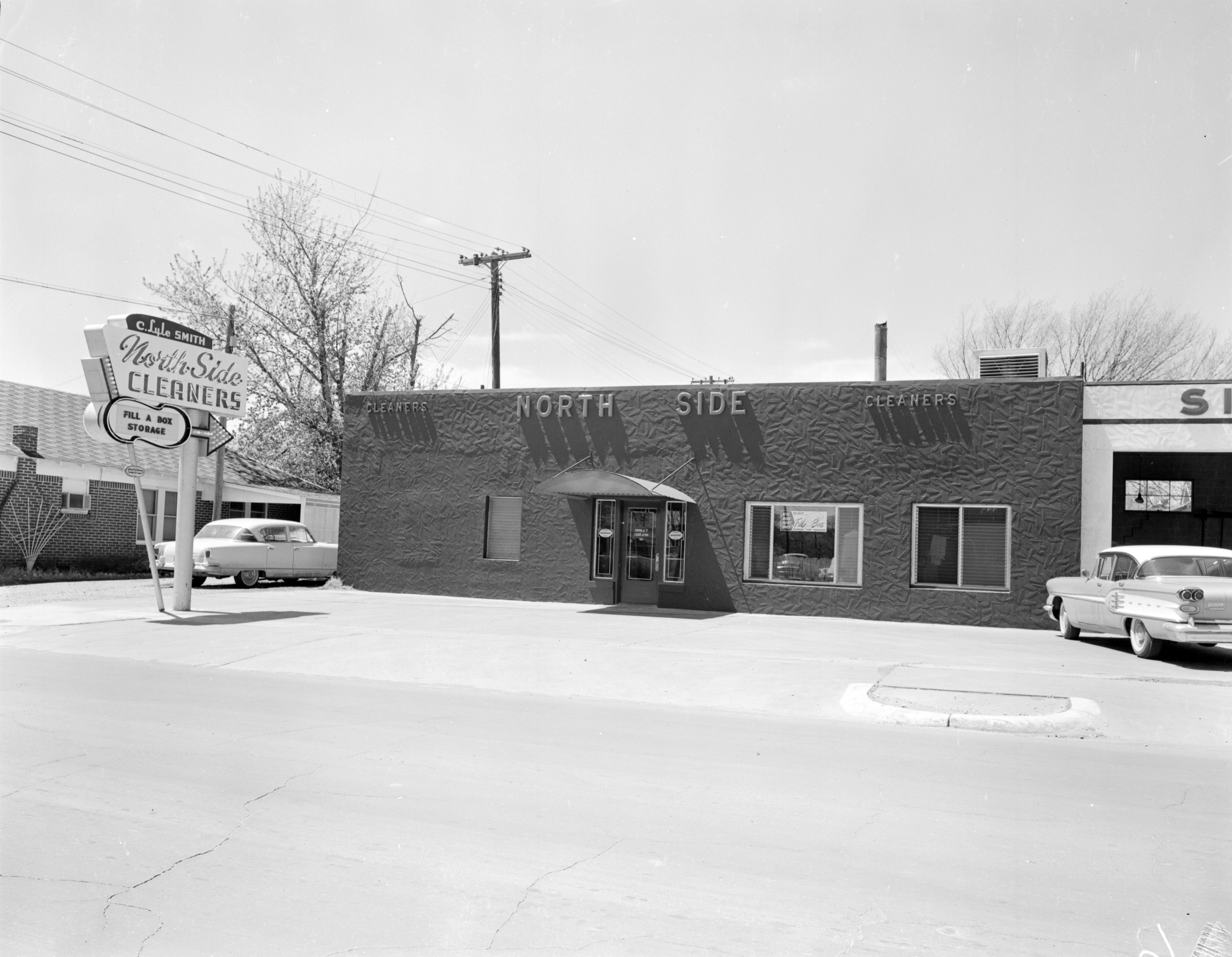 I really love this image of the Patton Equipment Sales building with Jones’ Neon Signs next door and a couple of monster station wagons parked in front.  (Jim Jordan, are you salivating over that Cadillac?): 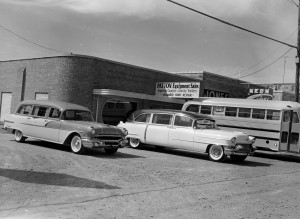 Our mystery photographer also had a few gigs shooting things other than architecture, so let’s end this series with a bit of that.  First, a couple of shots celebrating all things Easter: 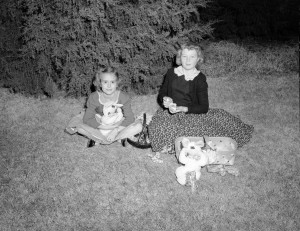 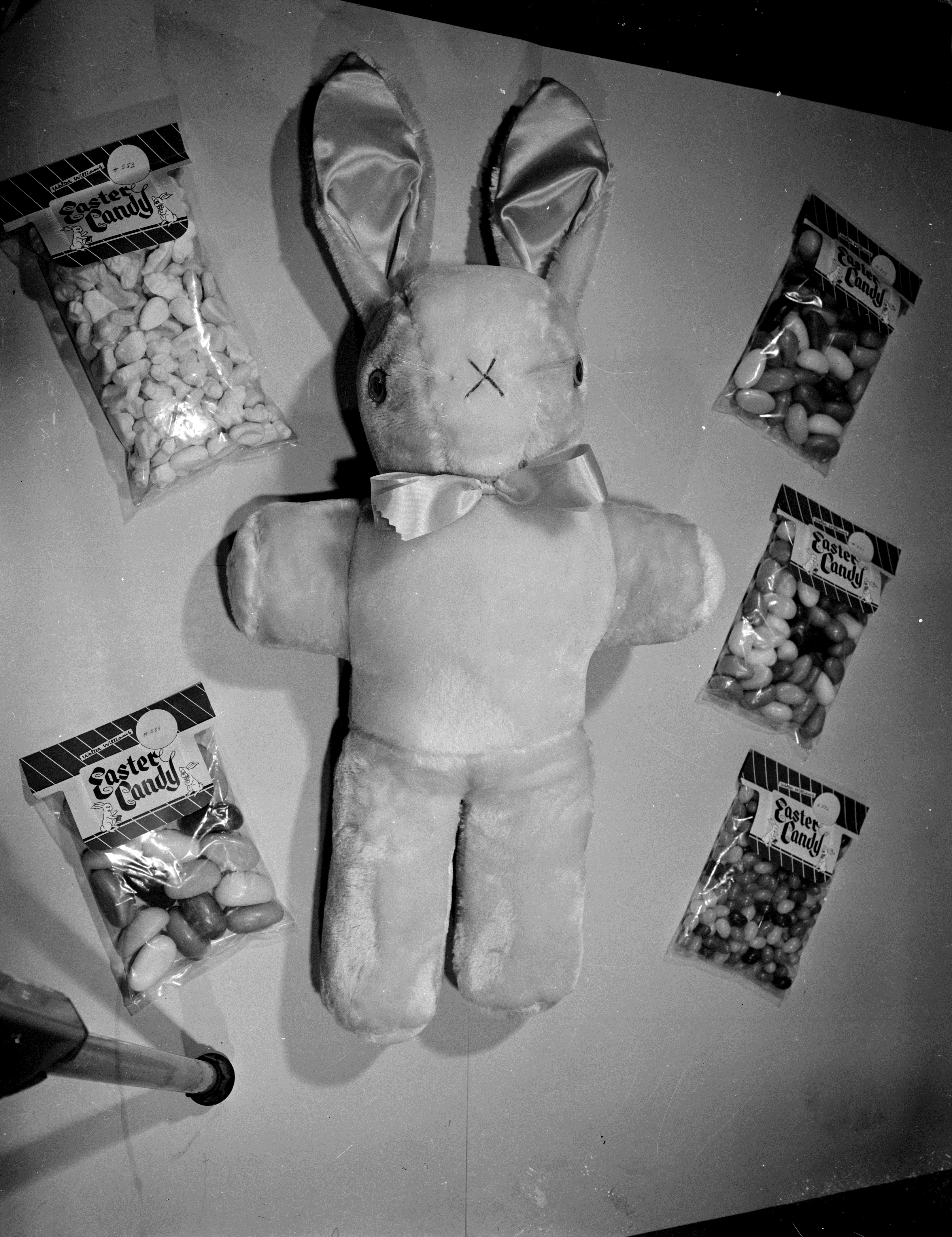 Going with the holiday theme, how about a little Christmas fruit cake? 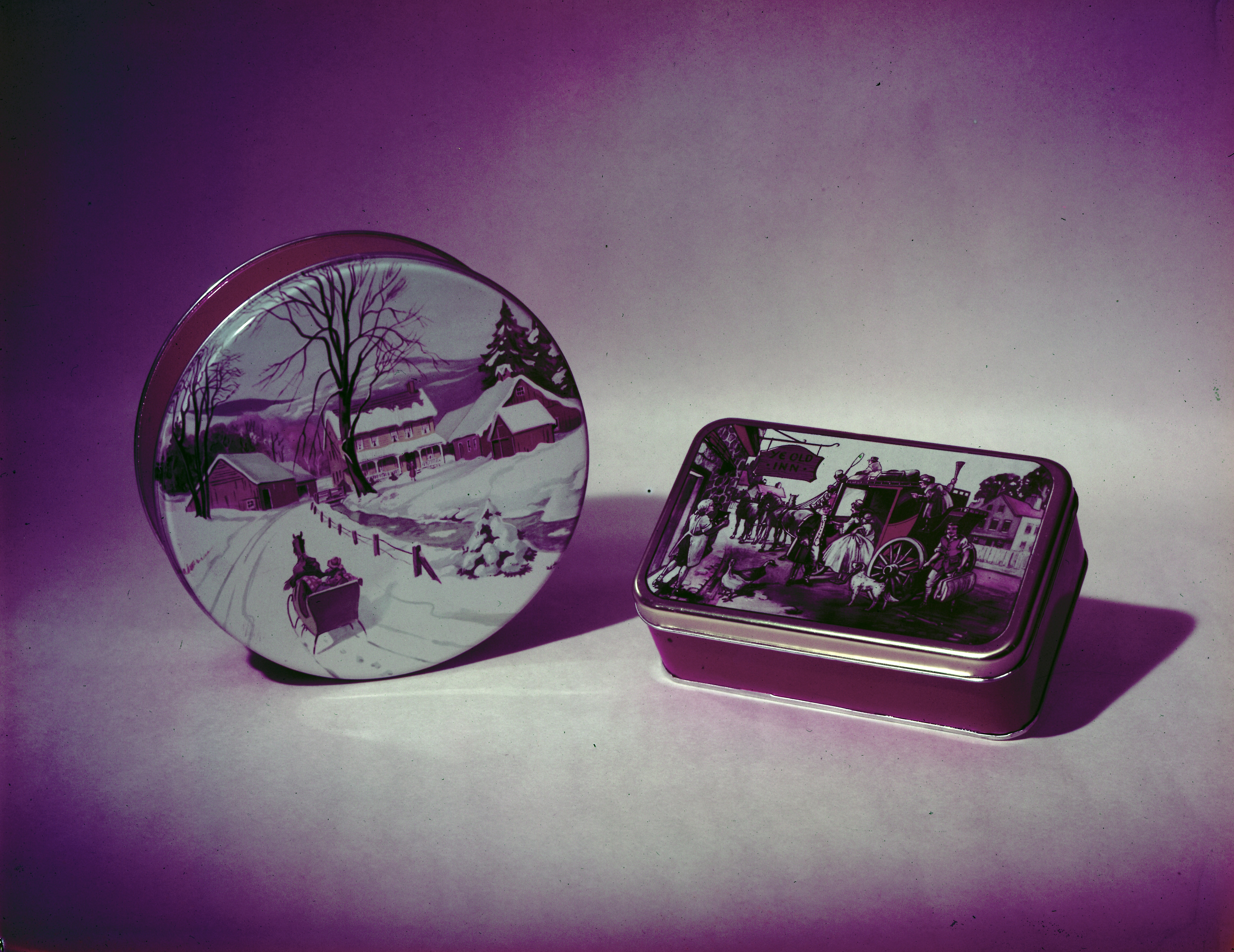 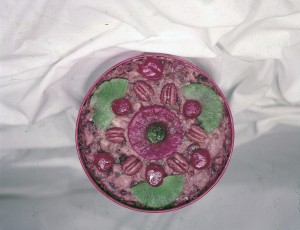 Yummmm … not!  Here’s another less-than-appetizing shot of some rather disturbingly-colored orange slices: 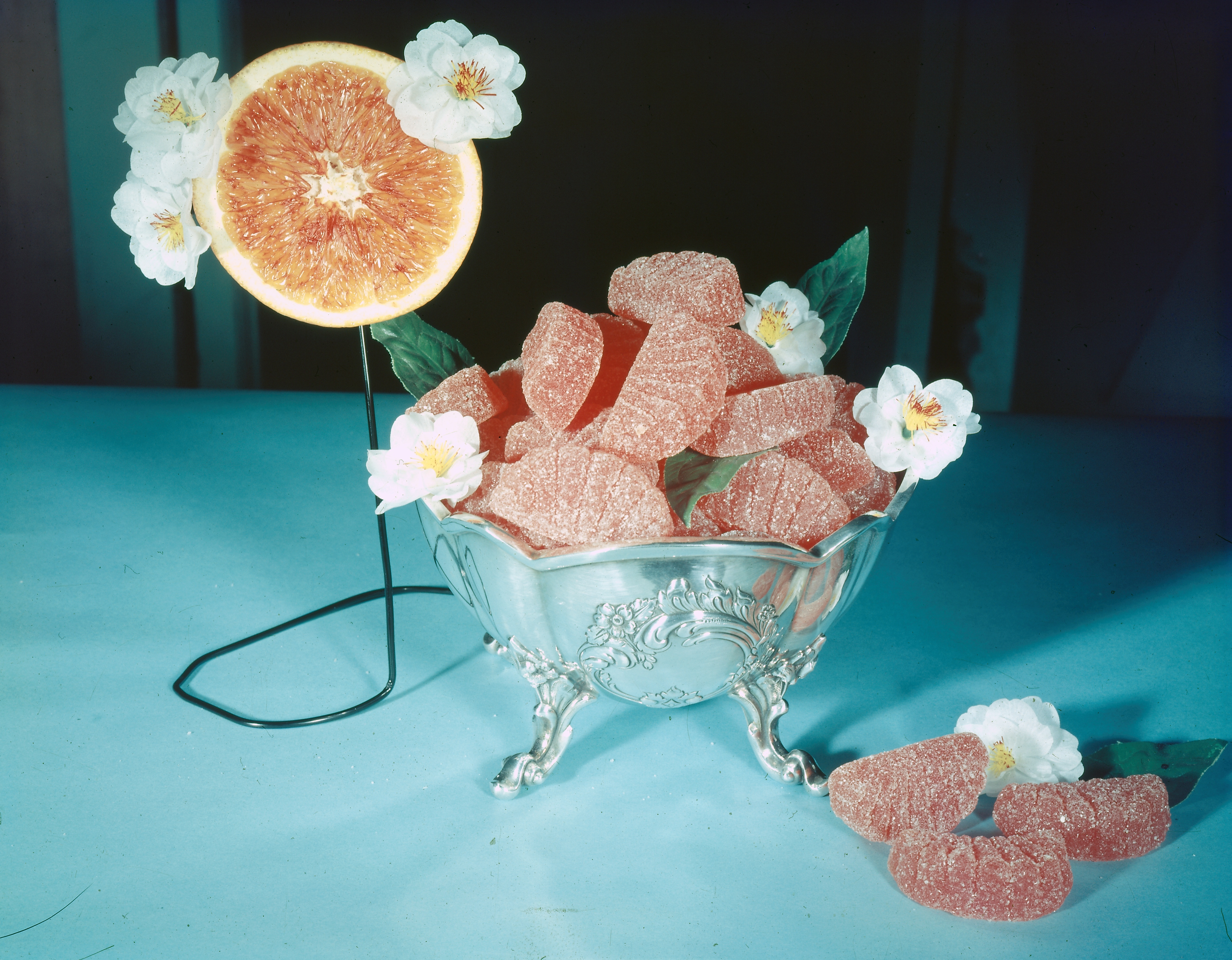 And, that’s it for Mike’s collection!  Thanks again, Mike, for sharing your treasure with the Mod Squad, and if any of you out there have any OKC modern collections you’d like us to feature, just let us know.

Mid-Century OKC and Thereabouts, Part 2 Performance, Not Size, Makes for Livability
Click here to go back to previous page