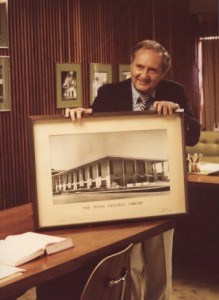 Charles Ward could easily be declared the Most Interesting Man in the World.  Take his WWII combat experience, for example, as was outlined in a 2010 article by William Peter Grasso for GTR News:

Recently, I had the privilege of meeting and interviewing WWII veteran Charles Ward. Entering Mr. Ward’s office, I was not sure if it housed an architectural firm or a historical library. Very quickly, I realized that the answer is both. The walls are covered with pictures of buildings that Mr. Ward has had a hand in creating during his long career as a prominent Tulsa architect. The tables and shelves are lined with history books, for he is also a teacher of military history. I found this most fitting, for in the unassuming yet worldly-wise manner of a combat veteran, Charles Ward tells a story that shaped history across the battlefields of France and Germany during WWII.

When war comes to the United States on December 7, 1941, he is a 17-year-old student at a military boarding school in Tennessee. His father — a builder of oil fields who traveled the world — and his mother are in South America, where they will be forced to remain for the duration of the war. Completing military school, he briefly attends the University of Oklahoma until turning 18. Then, in December 1942, he enlists in the US Army and enters Officer Candidate School at Fort Benning, Georgia.

December 1943. After training in stateside units as a newly commissioned Infantry lieutenant, he joins the 2nd Infantry Regiment, 5th Infantry Division in Northern Ireland as a platoon leader. The division — nicknamed “Red Diamond” for its shoulder patch – is training to participate in the coming invasion and liberation of Europe.

June 9, 1944 (D-Day plus 3). Ward’s platoon lands at Utah Beach and joins the conflict in Normandy. They advance south through the hedgerows of the Cotentin Peninsula to the city of Angers. The 5th Division is then reassigned to Third US Army, commanded by General George Patton. Turning east, Ward and his men begin their steady advance with Patton’s army, pushing the Germans back across central France. Summer turns to fall as they approach the German border, their path blocked by the fortress city of Metz.

September 1944. General Patton, obsessed with the capture of Metz, throws his forces against the 23 heavily defended forts that ring the city. For a solid month, Charles Ward and his fellow soldiers are thrust into a stalemate with fanatical German defenders as they attempt to envelop the city from the south. He describes the bitter fighting at Metz tersely: “We were pretty well decimated.” But he adds that it was a fair fight: the Germans were well beaten-up, too.

Lieutenant Ward receives the Silver Star from Patton himself for his actions under fire. With great irony, he relates what it was like for those being decorated in a combat zone. Ordered to turn in the grimy, foul-smelling battle dress in which they arrived at headquarters, they were issued clean, pressed uniforms so they would look sharp when Patton pinned the medals on their chests. Once the ceremony ended, however, they were told to surrender the clean uniforms and were re-issued their battle dress, still in the same unwashed state in which it had arrived. A general’s gratitude only goes so far, apparently.

Ultimately, Patton’s forces prevail at Metz, though at enormous cost. The city and some of its forts are taken in late November. The remaining forts are bypassed, isolated and eventually surrender. Ward and his men then cross into Germany, reaching the west bank of the Saar River in early December. There, they are withdrawn from the front line for some much-needed rest.

That rest doesn’t last very long, however. On December 16, the Germans launch their Ardennes Offensive, commonly known as the Battle of the Bulge. Patton startles his fellow generals — and his own troops, too, Ward says — when he announces that part of his army, to include the 5th Infantry Division, will turn 90 degrees and attack the Bulge’s southern flank in a matter of just days. But that’s exactly what they do. During this campaign, Lieutenant Ward is promoted to company commander. He insists the promotion is due “strictly to attrition and seniority.”

Ward relates a strange incident that occurs during his unit’s time at the Bulge. Among civilians in Luxembourg, they encounter a middle-aged American. But he isn’t technically a civilian: he is a 5th Infantry Division soldier who deserted the unit in France during WWI and taken up life there. In shaky, disused English, he expresses the fear that Ward and his men have finally come to arrest him for being AWOL! Instead, they assure him that he was still a “Red Diamond” and leave him with a chocolate bar and a pack of Lucky Strike cigarettes.

Winter is an enemy every bit as fierce as the Germans. Anticipating a quick dash into Germany after D-Day, Patton had not wanted his supply trains bogged down with heavy winter gear. Gasoline, ammunition and food were all that mattered. But now it is brutally cold and snowy; Ward and his men have no overcoats, only thin field jackets. Ward finds warmth in a “liberated” German overcoat — until someone “liberates” it from him.

January 1945. The German offensive in the Ardennes has been beaten back. On German soil again, Ward’s men crack through the vaunted Siegfried Line and make a treacherous assault crossing of the Rhine, a strategic imperative that opens the path to Frankfurt. There is a change in the German soldiers once they are pushed across the Rhine, Ward notes. “I have tremendous respect for them as fighters,” he adds, but they seem to lose their heart for the fight east of the Rhine, as if they know further resistance is pointless. German civilians feel the same, many hanging white flags of surrender from their homes as the Americans approach.

By May, Ward’s company has advanced through southern Germany and participated in the surrender of an entire German Army in the Ruhr. Then they advance into Czechoslovakia. There, as the war in Europe ends, they come face-to-face with the Russians. Ordered to fraternize, Ward and his men are shocked to find that these allies are “not like us at all.” Hardened by six cruel years at war, the Russians have little aversion to violent behavior and crimes against civilians. Ward has appropriated a BMW motorcycle but makes the well-intentioned mistake of letting a Russian attempt to ride it. Unable to master the necessary technique, the frustrated Russian turns the motorcycle into a ball of flame with bursts from his submachine gun.

Postwar politics dictate that Czechoslovakia is to be occupied by Soviet troops. The Americans pull back into Germany to begin occupation duty and maintain order. Charles Ward, now a captain, finds himself briefly assigned as Bürgermeister (mayor) of a Bavarian town and its surrounding villages. The townspeople are extremely cooperative. They work together to solve the town’s most pressing problem: finding enough food to sustain the civilian populace.

July 1945. The 5th Division has returned to the US in preparation for the invasion of Japan. That invasion soon becomes unnecessary. Charles Ward is discharged on December 24, 1945, and returns to the University of Oklahoma to complete his degree in architecture. He revisits Europe in 1994 for the 50th anniversary of the D-Day invasion.

After three years in the Army that included a continuous year in combat, Charles Ward had risen to the rank of captain and commanded over one hundred men; won a Silver Star, Bronze Star (with “V” device for valor), Purple Heart (just a minor wound, he says), Combat Infantryman Badge and the French Croix de Guerre. While that’s an impressive list of accomplishments for a young man of 21, he remains, in retrospect, “proud, but humble.” Then he adds: “Think of all those who deserved medals, so many of whom still lie in Europe and across the Pacific… but didn’t get them.”

After the war, Ward returned to OU to study architecture with Bruce Goff and graduated in 1950.  He then moved to Omaha and practiced with Leo A. Daly before settling in Tulsa in 1953 to practice and raise his family.  Perhaps his most iconic design is the one he completed for his own home, which has become known as the Comma House because it so resembles the punctuation mark.  It’s certainly one of Tulsa’s most beloved residential landmarks and is a must-see on any architectural tour of the city.