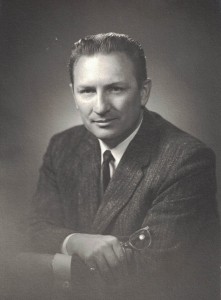 Cecil Stanfield was born in Vinita in 1918 and graduated from Tulsa Central High School in 1936.  He headed off to OSU after graduation and received his Bachelor’s degree in Architecture four years later.  When the U.S. entered the war, Stanfield joined the Army Air Corps (Air Force), where he rose to the rank of Captain in the 456th Bomb Group and received the Air Medal.  He served out the war in Italy then returned to Oklahoma afterward to establish his architectural practice.  Cecil designed some pretty fantastic buildings in the Sooner State and beyond during his mid-century heyday — in fact, he was so busy with out-of-state projects that he bought a plane in the early ’60s to easily traverse between all of his project locations.  Also during the 1960s, Cecil teamed up with uber Modernists, A. Blaine Imel and Frank Wallace, and the three worked together to make Tulsa a true destination spot for MCM architecture.  Cecil died in 1996.