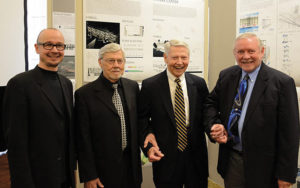 Brothers Tommy and William Shaw (center left and right in photo above) were born in Oklahoma City in 1930 and 1932, respectively.  Both studied with Bruce Goff at OU; Tommy graduated in 1953 and William followed two years later.  The pair formed their own firm in 1962 and quickly began designing buildings throughout Oklahoma.