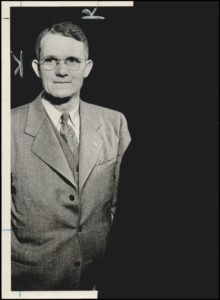 Albert Sidney Ross was born in Ada in 1897 and attended nearby East Central State College (now University).  He completed his degree at Chicago Tech in Chicago, Illinois and returned to Ada to set up his practice in 1921.  His father was a building contractor, so Ross returned home with quite a few connections and was quickly hired to design buildings all around town, including several structures at East Central (library, dorms, science lab, etc.).  In addition, he was president of the Oklahoma AIA in 1950 and continued working into the 1970s.  Ross died in Ada in 1987.