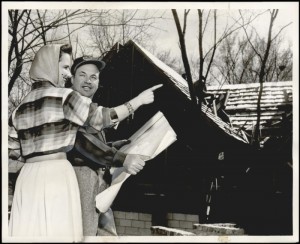 Oklahoma City’s only husband and wife design/build team in the 1950s was Luke and Dorothy Rodgers.  Melding old world charm with modern amenities, Dorothy dreamed up some of the city’s most iconic storybook homes, often getting inspiration for her designs after looking through illustrated children’s fairy tale books.  Dorothy created the designs and Luke drew up the plans and custom built each home. His brother, Jack, did all of the millwork on their projects, so it was a true family affair.

Prominent Oklahoma City home builder/contractor Luke Rodgers, Jr. passed away quietly to be with his Savior on Tuesday, October 06, 2009. He lived a full, rewarding life, outlasting many close friendships, especially his beloved wife Dorothy. Born June 11, 1917 in Gracemont, OK, his family moved to Oklahoma City after homesteading in New Mexico. He rebuilt bicycles and cars and sold them during the Great Depression. After the family home and general store was destroyed by a tornado, Luke built and was running his own service station by age 18. He served at Tinker Field during WWII, building airplanes. After the war he married Dorothy and started his construction business. With Dorothy designing and detailing plans, they constructed hundreds of custom homes and commercial buildings in their 50 year career. He is survived by his daughter, Claudia, sons, Ted and Tom, eight grandchildren, five great-grandchildren and one great-great-grandchild.

Storybook homes in Belle Isle and throughout Oklahoma City