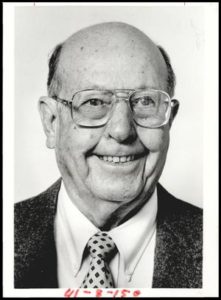 Clarence Monroe Parker was born in Holdenville, Oklahoma in 1904 and worked as the chief draftsman for Robert F. Ferguson in Ada for several years before moving to Forsyth Wolaver & Kershner.  Back in Ada, he established his own firm in 1952 and practiced until his retirement in the 1970s.  Aside from architecture, Parker was an avid golfer and, at the age of 88, was the “oldest golfer in the nation to shoot his age in 1986, according to Golf Digest.” (Oklahoman, 1987).  He died in 1994.